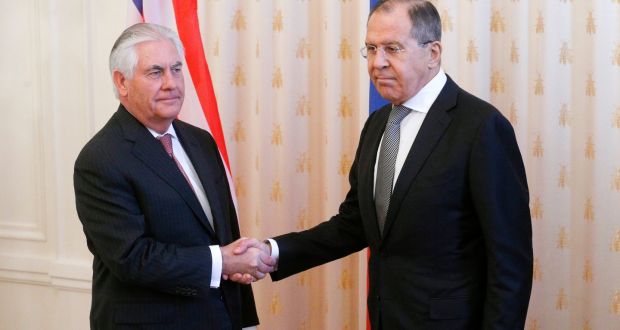 SECRETARY TILLERSON: Good evening. We just came from a productive meeting, as you heard Foreign Minister Lavrov mention, of about two hours with President Putin. We frankly discussed the current state of U.S.-Russia relations. I expressed the view that the current state of U.S.-Russia relations is at a low point and there is a low level of trust between our two countries. The world’s two foremost nuclear powers cannot have this kind of relationship. We further discussed approaches to improving our channels of communication. We had a lengthy exchange of views regarding the situation in Syria and shared perspectives on possible ways forward.

Earlier today, Foreign Minister Lavrov and I had a lengthy conversation about issues that require immediate attention and issues that require longer-term attention. We understand that improvement in the long-term relationship will be required if we are to make progress on issues where we have different views.

We spoke extensively about Syria, and in some areas we share a common view. Specifically, we both believe in a unified and stable Syria, and we agree we want to deny a safe haven for terrorists who want to attack both of our countries. We agree that North Korea has to be de-nuclearized. We agreed there needs to be more senior-level communication between our two countries, both at a diplomatic and military level.

But there is a broad range of other issues in which we have differences. Some have global implications with long-term requirements, and others are understood to be bilateral. Over the course of the past two years, a number of reciprocal actions have been taken to demonstrate the dissatisfaction each country has with the other. We need to attempt to put an end to this steady degradation, which is doing nothing to restore the trust between our two countries or to make progress on the issues of the greatest importance to both of us.

We have agreed to establish a working group to address smaller issues and make progress toward stabilizing the relationship, so that we can then address the more serious problems. Foreign Minister Lavrov and I agreed we would consider further proposals made about the way forward in Syria, including consulting with our allies and coalition members. And we will continue discussions about how to find a solution to the Syrian conflict.

We also discussed current threats posed by the North Korea’s regime – the regime’s ongoing development of their nuclear program, and the constructive role Russia can play in encouraging the regime in North Korea to change its course, so that we can create the conditions for talks regarding the future.

On Minsk, we considered the importance of the accord. Russia can make progress in implementation by de-escalating violence and taking steps to withdraw separatist armed forces and heavy weapons so that OSCE observers can fulfill their role. Until full progress is made under the Minsk Accords, the situation in Ukraine will remain an obstacle to improvement in relations between the U.S. and Russia.

I thank the foreign minister for a productive round of discussions and I look forward to future conversations. Thank you.

QUESTION: (Via interpreter) Rossiya 24. My first question is to Mr. Tillerson. We have heard from Washington not only contradictory but also aggressive statements. I mean Mr. Trump, who has called Assad an animal, and from the White House, Sean Spicer, who said that Hitler hadn’t used chemical weapons. How does that actually fit in with American diplomacy and when will the rhetoric change?

SECRETARY TILLERSON: Well, I think the perspective from the United States, supported by the facts that we have, are conclusive that the recent chemical weapons attack carried out in Syria was planned and it was directed and executed by Syrian regime forces, and we’re quite confident of that. This is just the latest in a series of the use of chemical weapons by the Assad regime, notwithstanding their use on more than 50 occasions of chlorine bombs, and cluster bombs, and other types of weapons that are intended to maim and kill in the most horrific ways. So I think the characterization is one that President Assad has brought upon himself.

QUESTION: Thank you. Secretary Tillerson, I want to ask you about your conversations with President Putin about Syria. You’ve predicted that Assad will leave power through a political transition. How will you compel Assad to participate in a political transition that leads to his own ouster? Are war crimes charges on the table? And how long will the United States wait for Russia to come around?

And Foreign Minister Lavrov, if I may. Your government and the United States Government seem to be miles apart on the Syria issue, on Ukraine, and other issues. Did you feel that you cleared up any of those issues that you mentioned earlier today since you’ve had those discussions with Secretary Tillerson?

SECRETARY TILLERSON: Well, we did discuss at length the future role for Assad, whether it be in a future political process or not. Clearly, our view is that the reign of the Assad family is coming to an end, and they have again brought this on themselves with their conduct of the war these past few years. We discussed our view that Russia, as their closest ally in the conflict, perhaps has the best means of helping Assad recognize this reality. We do think it’s important that Assad’s departure is done in an orderly way – an orderly way – so that certain interests and constituencies that he represents feel they have been represented at the negotiating table for a political solution. How that occurs, we leave that to the process going forward. We do not think one has to occur before the other can begin. And it will take a pace of its own. But the final outcome in our view does not provide for a role for the Assad – for Assad or for the Assad family in the future governance of Syria. We do not think the international community will accept that. We do not think the world will accept that.

QUESTION: What about the war crimes charges?

SECRETARY TILLERSON: We discussed the issue that as time goes by and more and more evidence continues to be gathered, it is possible that the threshold necessary to charge individuals, including Bashar al-Assad, may be achieved. As you know, this is a very high legal hurdle in order to bring such charges against an individual. So I would not suggest to you that all of that evidence is in place, but I think the longer time goes by, it’s possible that the case will be made. And there are certain individuals who are working to make that case.

QUESTION: (Via interpreter) Thank you very much. I have a question to Mr. Tillerson. Did you discuss in today’s negotiations the intervention of Russia in the U.S. elections, and could you tell us about how the presence of Russian cybernauts differs from the question of American cybernauts in virtual space?

There is also the whole question about the Korean issue. Have you actually thought about setting up a group which would actually look at that kind of thing together?

SECRETARY TILLERSON: We touched only briefly on the issue of cyber security, and in particular on the challenges that it is placing on everyone in terms of a new threat, an emerging threat. But I think I do make a distinction when cyber tools are used to interfere with the internal decisions among countries as to how their elections are conducted. That is one use of cyber tools. Cyber tools to disrupt weapons programs – that’s another use of the tools, and I make a distinction between those two. Clearly, this is an issue that has emerged in our time for which we have yet as an international community come to some conclusion around how we want to respond to that. And so there will be further discussions, and it is on the agenda and it is in the agenda that Foreign Minister Lavrov passed to me for us to have further discussions in the future.

QUESTION: Thank you. Secretary Tillerson, did you discuss today with President Putin or Foreign Minister Lavrov sanctions or other concessions that the United States might make in exchange for a change in behavior from the Russian Government? And also, speaking about what you just answered previously, did you present to President Putin or the foreign minister specific evidence the Russian Government interfered in the U.S. election?

And to Foreign Minister Lavrov, if an independent investigation finds the Assad government attacked his own people with chemical weapons, what will Russia do? President Putin says there’s an effort to blame Assad and plant evidence. Did you present that evidence to Secretary Tillerson today, and would Russia refuse to consider to agree to any circumstance that results in the ousting of Bashar al-Assad?

SECRETARY TILLERSON: We discussed no change in the status of sanctions that have been in place with Russia as a result of certain actions taken in Ukraine, as you know. I think as to the question of the interference with the election, that is fairly well-established in the United States and I think that has been spoken to on the Hill as well with the Congress. And it is a serious issue. It’s one that we know is serious enough to attract additional sanctions. And so we are mindful of the seriousness of that particular interference in our elections, and I’m sure that Russia is mindful of it as well.

QUESTION: (Via interpreter) Good evening. I’d like to ask a question to both ministers. The Korean Peninsula – the Americans have sent a whole naval company. Did you talk about that in your negotiations and the dangers to the particular region? And does it mean that America has some kind of plans for a military campaign around the Korean Peninsula?

QUESTION: Thank you very much. Mr. Secretary, before these meetings you said you believed Russia was either incompetent or complicit in these chemical weapons attacks. After your extensive meeting with both Vladimir Putin and Sergey Lavrov, do you know which one that is and what concrete thing can be done to rebuild that lack of trust?

And Minister Lavrov, if I could indulge you to answer in English if you would, sir. President Trump has called Bashar al-Assad an animal. This is the leader your government continues to back. Can you tell us how long Russia will be willing to risk the lives of its soldiers and spend its money to protect him?

SECRETARY TILLERSON: With respect to Russia’s complicity or knowledge of the chemical weapons attack, we have no firm information to indicate that there was any involvement by Russia, Russian forces, into this attack. What we do know – and we have very firm and high confidence in our conclusion – is that the attack was planned and carried out by the regime forces at the direction of Bashar al-Assad.