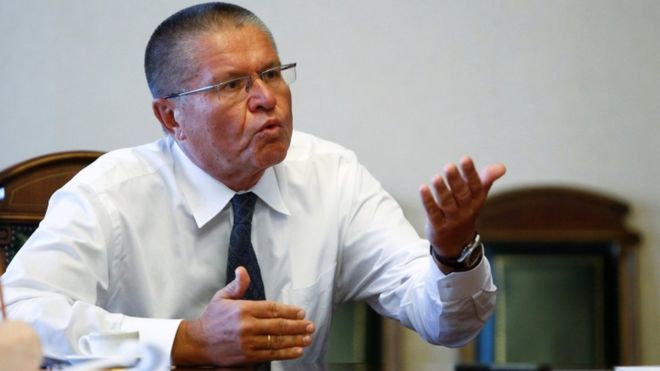 Russia’s Economy Minister Alexei Ulyukayev has been detained in connection with an alleged bribe.

His ministry had given a positive assessment that led to the oil giant Rosneft acquiring a 50% stake in another oil company, Bashneft.

He is the highest-ranking Russian official to be detained since the 1991 coup attempt in what was then the USSR.

“This is about extortion of a bribe from Rosneft representatives accompanied by threats,” Svetlana Petrenko, a spokesperson for the Investigative Committee, told RIA Novosti news agency.

“Ulyukayev was caught red-handed as he received a bribe,” she said.

The Investigative Committee said the minister would soon be charged.

He could face a prison sentence of between eight and 15 years, if found guilty.

Rosneft, which is controlled by the Russian government, bought 50% of Bashneft for 330bn roubles (($5bn) in October.

A Rosneft spokesperson told the Tass news agency it acquired the Bashneft stake “in accordance with Russian law on the basis of the best commercial offer made to the operating bank”.

Mr Ulyukayev was appointed economy minister in 2013; prior to that, he had been deputy chairman of Russia’s central bank for a decade.