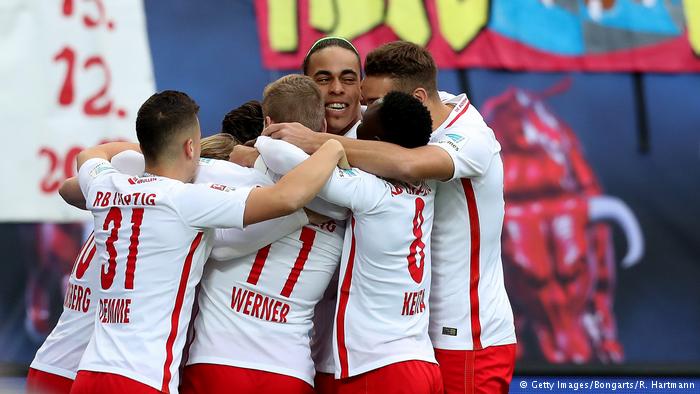 Newly-promoted RB Leipzig are now level on points with champions Bayern Munich after a comfortable 3-1 win over Mainz. Schalke continued their own impressive form, beating Werder Bremen by the same score.

RB Leipzig moved level on points with Bayern Munich at the summit of the Bundesliga table on Sunday afternoon with a comprehensive 3-1 win over Mainz.

Following a humbling 6-1 defeat in a mid-week Europa League tie to Anderlecht, many feared the worst for Martin Schmidt’s side. Those fears were entirely justified as the visitors quickly capitulated in a shocking first half defensive display.

Timo Werner opened the scoring for Leipzig just three minutes in to the game when he picked up a loose ball in the box and smashed it in to the back of the net. Ralph Hasenhüttl’s side didn’t stop there.

The powerful hold-up play of Danish forward Yussuf Poulsen, combined with the movement of Werner and Emil Forsberg, meant Leipzig were able to over-run a Mainz defence that looked as though it was still dazed from their last game.

After another dazzling, yet strangely uncontested, run from Werner, created the second. The ball was flung in to the box where Forsberg got to it first and duly knocked it home to make it two. Mainz did their best to keep the score respectable before the break as they fended off further chances from Werner, Forsberg and a Naby Keita shot. But they failed.

Just moments before the referee blew for half time Forsberg darted down the left wing and, with a stroke of luck, managed to pull the ball back to Werner, again unmarked in the middle of the box. The German striker struck to make it three for Leipzig and five for him this season.

Leipzig jogged down the tunnel at half time to a chorus of cheers and singing while Mainz slowly walked off the pitch, well aware that the game was already beyond them.

Schmidt clearly felt the same way as he brought defender Stefan Bell on for winger Jairo Samperio to try and shore up a horrendously porous defence. For the most part, it seemed to work. Despite half chances from Werner and Poulsen the away side looked far more coherent and defensively sound in the second half.

In fact it was Mainz who broke the second-half deadlock when Bell rose highest in the box to head home a corner with just 15 minutes left of the game. A consolation goal but also a telling sign of how the game had turned in the second half.

Just five minutes later Donati was down in the Leipzig box demanding a penalty with some justification, yet the referee deemed it a dive. Had he awarded the spot kick then the game may have been turned on its head but that was the last of it from Mainz, meaning Leipzig continue to shake up the Bundesliga status quo.

Schalke continue to slowly but surely climb up the Bundesliga table after a 3-1 win over Werder Bremen on Sunday night leaves them in 12th.

Markus Weinzierl’s side went in to the game having won four of their last five in all competitions yet started the match with a notable malaise, possibly following on from a mid-week game in the Europa League.

Indeed it was Alexander Nouri’s rejuvenated side that looked most likely to open the scoring in the opening exchanges, when Theodor Gebre Selassie forced a fantastic save from Ralf Fahrmann 15 minutes in to the match. Just minutes later the Schalke keeper was called upon to intercept a counter attack that would have surely otherwise have led to a goal.

It takes special players to turn a game on its head and fortunately for the Gelsenkirchen side they have one of those in young Max Meyer. Just after the 30th minute mark the midfielder cracked the ball off the crossbar with an exquisite volley from 35 yards out. Fortunately for the home side, Alessandro Shöpf was alert enough to head in the rebound from a few feet out.

Just three minutes later towering defender Naldo fired off one of his signature free-kicks which forced a fumble from Felix Wiedwald in goal. In a not too dissimilar fashion to the first goal, Nabil Bentaleb was running in to the box to tap in the rebound.

The two-goal salvo would have surely knocked the wind out of Bremen’s sails had they not been awarded a penalty just before half time when Schöpf was deemed to have knocked Serge Gnabry over in the box. Replays suggested that it was a harsh call on the young winger yet Gnabry was far from bothered when he knocked the ball in from the penalty spot to make it 2-1 at half time.

Scorned by the harsh penalty decision, Schalke pushed on for a third goal to cement their win in the second half. Schöpf’s unmarked volley in the Bremen box in the 58th minute should have made it three to the Royal Blues as should Maxim Choupo-Moting’s close range header just a minute later.

Yet the home fans didn’t have to wait long for victory to be sealed. Just after the hour mark attacking full-back Sead Kolasinac, who has been in impressive form of late, found Shöpf in the box,and the Austrian cut inside to neatly tuck a shot inside the bottom right corner. With a mammoth task ahead of them Bremen struggled to break down a Schalke side now intent on seeing out the victory. Aside from the theatrics of Gnabry in the opposing box, Bremen were unable to trouble their opponents in the closing stages.

All three points for the Royal Blues and they are now unbeaten in their last five Bundesliga matches.