Home » Manchet 2 » Aoun supporters: “We believe in our president even if an extended parliament brought him to presidency” 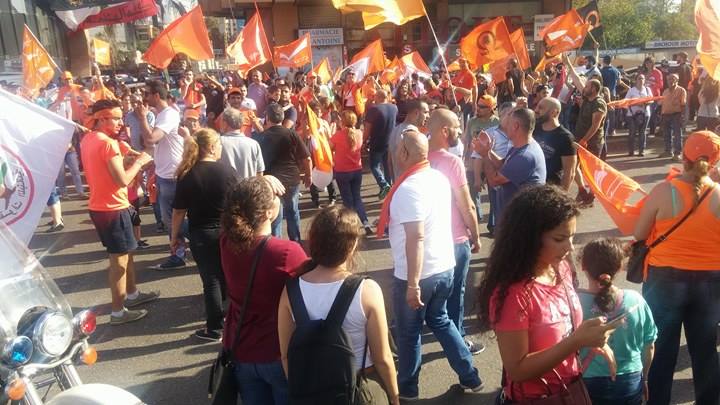 Aoun supporters: “We believe in our president even if an extended parliament brought him to presidency”

For many Lebanese, today was a “national wedding”, since the deputy they support, Michel Aoun, was announced president. That was not surprising for anyone residing in the country, or following the updates in the 10,452km country. As Aoun supporters have been preparing for this day since a while, many Lebanese opposed the idea of a president being elected from an extended parliament, asking: “How is this called democracy?”…

Deputy Michel Aoun won Lebanon’s presidency in the third ballot of the second round, obtaining 83 votes. Thus, the 47th parliamentary session ended with the 13th president of the Republic, General Michel Aoun, who waited 26 years to come back to Baabda, the National News Agency (NNA) reported.

Newly elected President, gave his inaugural speech today stating that the first step towards stability is “political stability”, which can only be achieved through respecting the Charter and Constitution.

Aoun also said: “We will protect our country from the Israeli enemy and deal pre-emptively with terrorism until we obliterate it,” adding “There is no solution in Syria without the return of the displaced. We must also confirm the right of return for Palestinians.”

He explained that solving the dilemma of the Syrian refugees should happen with the aid of other states and in coordination with the United Nations.

While highlighting his work in the military institution and the sacrifices he made, Aoun hoped to be able to grant the Lebanese the stability they aspired for so that no citizen had to leave his/her homeland.+

From Mirna Shalouhi to Harek Hreik

In Mirna Shalouhi, the area where the main head quarters of the Aoun’s FPM party is located, “Russia-Now” interviewed a number of people, all of which showed full support for General Aoun, “even if an extended parliament brought him to presidency”.

We asked a number of supporters, what they think Aoun’s presidency will change in Lebanon, and answers varied. Some people spoke of “Solving the “strangers'” issue”, referring to making Syrian refugees return to their country, currently at war, as the whole world knows.

Other people affirmed: “If not Aoun, then who”, mentioning that they do not think anyone is more legitimate that the newly elected president.

But how could Aoun’s supporters be convinced of his presidency, when Aoun himself has said in an interview in 2015, that “any Lebanese president that will be elected by an extended parliament will not be legitimate?”…. A woman in her fifties answered our question by saying: “What matters is that Aoun is the President now. The way that he was elected does not matter much”.

FPM supporters were counting the votes, until the results came out and they started celebrating by closing the highway near Mirna Shalouhi (before the security forces forbid them from doing so).  Fireworks echoed in many places in Lebanon, and many people opened fire in the air.

Although “Hezbollah” is a main ally of Aoun, and political analysts suppose that Aoun would not have witnessed sitting on the president’s seat if it weren’t for Hezbollah’s support, we saw very few flags for “Hezbollah”.

On the other hand, “Lebanese Forces’s” flags bombarded the place, and Samir Geagea supporters were celebrating, drinking champagne, and distributing sweets for passing cars.

Harek Hreik, however, Aoun’s hometown in the Southern suburbs in Lebanon, was full of banners congratulating him.

Social media took a great share of this “historic” day, and opinions varied between supporters and opponents. The most trending hashtags in Lebanon revolved around Aoun and the Lebanese Presidency. Some of the hashtags were #Aoun, #President, #Lebanon, etc…

Many people, especially the young generation, were surprised about many members of parliament, they did not know of. “We’ve never heard of them or saw them before on any media outlet”, some people tweeted.

One common statement unites everyone we’ve met or spoke to today. A large number of the Lebanese say: ” We are tired and fed up. We just want stability and security”. Some are convinced that these “needs” will arrive with the new president, while others are so angry they did not even “choose the MPs that elected the current president”.

Many are waiting for a “new era” with Michel Aoun, and a new vision regarding Lebanon’s foreign policy. While everyone analyses from his/her own point of view, we shall wait and see how will Aoun’s internal and foreign policy will be, especially that his main allies right now “Hezbollah”, “Future Movement”, and the “Lebanese Forces” are not on the same terms regarding many internal and foreign topics.