Home » Manchet 3 » How did politicians react on Aoun’s presidency of the Lebanese Republic? 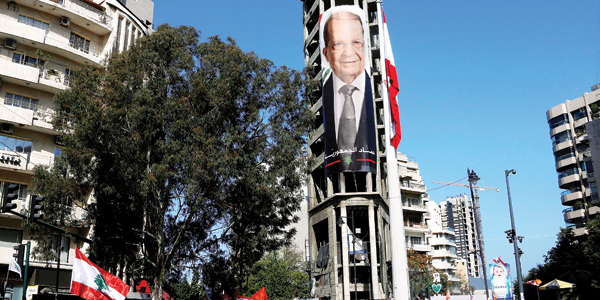 How did politicians react on Aoun’s presidency of the Lebanese Republic?

After Deputy Michel Aoun won Lebanon’s presidency in the third ballot of the second round, obtaining 83 votes, politicians’ statements were all over media outlets. Some supported his presidency, while others congratulated him although they did not vote for him.

Here are some of the local and international politicians’ reactions:

The media bureau of Hezbollah issued the following statement: “Secretary General of Hezbollah, Sayyed Hassan Nasrallah, telephoned the President of the Republic, Michel Aoun, and congratulate him on his election as head of state. He wished him long life and good luck in his new national responsibilities.”

Speaker Nabih delivered a word from the Parliament which he initiated by congratulating President-elect, General Michel Aoun, and the Parliament members.

“We congratulate you on electing a president at the toughest national, regional and international stage,” he told MPs.

“Allow me at the beginning to thank the Parliament in particular and the government of Premier Tammam Salam for the suffering they had to undergo together (…) so as to get to this moment. I am pleased to welcome you, Mr. President, under the dome of the Parliament,” he said to Aoun.

“Today, the Lebanese Parliament has completed the presidential election and has entrusted you, on behalf of the people, to bring the ship safe to shore amid the rocking waves surrounding us and threatening to divide our countries, as well as the countries of the Arab neighborhood,” Berri said.

Shedding light on the severe security threats of terrorism targeting Lebanon, as well as on the dreadful economic situation mainly caused by the major displacement flow, the Speaker said “the real threat to our country has always stemmed from the aggressions of the Israeli enemy for strategic reasons and for water-related greed.”

“A new maritime line has been drawn over our natural resources while Israel continues to obstruct the implementation of UN resolution 1701 and occupies precious parts of our land,” he went on.
“The aforementioned requires on the President — and you were once the Chief of the military institution — to provide the Army with what it requires of gear and personnel and to support the security institutions to be able to carry out the functions of defense, next to the resistance and the people.”

“One key issue remains essential, which is to stop the drain Lebanon’s human wealth,” Berri urged, calling not only to give back attention to the Ministry of Expatriates but also to allow the participation of expats in the political process.

“Mr. President, as a result of the political dilemma we lost a lot! The priority now is to agree on a modern electoral law and that, in my opinion, could only be achieved by the adoption of the proportionality and the emphasis on women’s quota and on the youth participation in voting. The transit from sectarianism to the State without damaging the sects only passes through such a law. Your election must be the beginning and not the end, and this council is ready to extend a helping hand for the sake of preserving Lebanon,” he concluded.

Head of the Lebanese Forces (LF) addressed his party’s supporters, particularly the families of martyrs, and asserted that the choices made were in the best interest of the country, and a fulfilment for the goals which the fallen martyrs have fought and died for.

“The inaugural speech was very lucid, and focused on building the economy, army and foreign policy. Aoun was clear in committing to the decisions of the Arab League and the United Nations,” he said.

Frangieh felicitates Aoun: A win for the political camp

Head of Marada, MP Sleiman Frangieh, congratulated the President-elect Michel Aoun and considered his victory as a “victory for the political camp” the he followed.

Frangieh noted that the blank ballot vote was his attempt to save his allies any embarrassment and future retribution.

Jumblatt: We all need to cooperate

MP Walid Jumblatt said from the Parliament that it was “an excellent day.”

“Finally we are out of the crisis after three years…it is important that we all cooperate to face national challenges,” said Jumblatt.

He called on everyone to leave squabbles behind and work together.

FPM’s head, Foreign and Expatriates Minister, Jebran Bassil commented on his Twitter account on the election of President Michel Aoun saying, “It is the Resurrection Day”.

Minister of Education and Higher Learning, Elias Bou Saab, said in a statement that the relation with Speaker Nabih Berri does not need mending, since “it is more than comfortable.”

The Minister pointed out that citizens awaited solutions to chronic problems from the new administration.

“Let no one think that the problems of garbage, economy and salary scale will go unrepaired,” vowed Bou Saab.

Siniora: We will coordinate with new president

Former Premier Fouad Siniora said in the wake of the election session “we now have a president of the republic and we will coordinate with him.”

Former Prime Minister, Najib Mikati, said in a statement “we respect the choice of the deputies which has led to the election of President Michel Aoun”.

Mikati congratulated President Michel Aoun, hoping that Aoun’s mandate will be the era of security, stability and prosperity.

Mikati said that he will be in the constructive opposition which will take the positions according to the performance of the mandate and cabinet that will be formed.

Tourism Minister, Michel Pharoun, categorically deemed presidential election as a “highly important event in victory of Lebanon and the Lebanese legitimacy in terms of the Constitution and agreement realized amongst parties.”

“This event is also a triumph of the Christian political legitimacy required by all parties,” Minister Pharoun told National News Agency upon his arrival at Sassine Square to join the assembled crowds in celebration of the election of General Michel Aoun president of the republic.

“We started a phase of political stability and fortification of unity and reconciliation in the country,” Pharoun added, hoping that all sides would rise above narrow calculations and place Lebanon’s supreme interest above any other consideration.

The Ambassador of Turkey, Cagatay Erciyes, addressed the Lebanese with a word on the occasion of the election of Michel Aoun for President:

“I have been proudly serving in this beautiful country for a year and this has been a tremendous experience for me to see how Lebanon is a shining example of peaceful co-existence of different cultures, religions and sects.

Today, this has once again proven true

Today, Lebanon has chosen its 13th President and opened a new page to the political deadlock paralyzing its state institutions for almost 3 years.

On behalf of my country, I would like to extend him our best wishes of success.

After this historical moment, we look forward to seeing the formation of the new government as soon as possible.

I believe that this atmosphere of unity will prevail and carry Lebanon further.

Without any doubt, Lebanon’s success will be the success of the whole region.

This year we also celebrate the 70th anniversary of our diplomatic relations with Lebanon.
Turkish-Lebanese relations have always been characterized by close friendship, solidarity and cooperation. Our two brotherly countries remain bulwarks of stability in an otherwise turbulent region.
We are bound not only by the constants of geography, history and culture but also by a firm commitment to upholding unity in diversity, moderation and peaceful coexistence.
I am particularly glad to note that our bilateral relations in almost all fields are growing at a steady pace.

Turkey is firmly committed to the preservation of Lebanon’s independence, sovereignty, unity, security and stability.
With this understanding, Turkey will continue to support Lebanon and further strengthen its bilateral relations in every field.

As the Turkish Embassy in Beirut we will spare no effort to this end together with our Commercial Center, Yunus Emre Cultural Center and our development Agency TIKA.

Finally, I would like to extend our gratitude to the Lebanese authorities and the Lebanese people for hosting us in their beautiful country and express our appreciation for the close friendship and cooperation extended to us.
Thank you very much once again for being with us today.
Long live the Republic of Turkey, long live the Republic of Lebanon.

German Foreign Minister, Frank-Walter Steinmeier, congratulated in a statement General Michel Aoun over his election as a president.

“This event is a sign of political optimism, as it puts an end to the ongoing political stalemate for more than two years and gives us hope that the Lebanese democracy is strong enough to overcome the other challenges facing Lebanon,” the statement added.

Egyptian Ambassador Nazih Al-Najjari welcomed in a statement the election of General Michel Aoun as President of Lebanon’s Republic, stressing that “this important development completes the Lebanese constitutional institutions structure after two and a half years of vacuum in the presidential post.”

He stressed that “the election of the president would protect Lebanon from the potential risks,” highlighting the sisterly ties between Lebanon and Egypt.

The ambassador uttered confidence, “after the last visit to the President, days ago, in his intention along with the various leaders and forces to work on strengthening the logic of partnership in the governance of Lebanon to protect its future and anchor coexistence among its citizens.”

EU High Representative/Vice-President Federica Mogherini said in a statement on the election of Michel Aoun as the President of Lebanon:

“The election of Michel Aoun as President of the Republic of Lebanon more than two years after the end of term of his predecessor is crucial for the future of the country. Lebanon is confronted by many challenges, starting with the conflict in neighbouring Syria, and is giving hospitality to hundreds of thousands of refugees.
Today’s election of the President opens the way for all political parties to now engage in constructive dialogue and share the responsibility to address the longstanding institutional crisis and the needs of the Lebanese citizens. As the European Union, we remain fully committed to support Lebanon in all fields, and in particular on the refugee crisis.
National unity based on the Constitution, the Taef agreement, the ministerial Baabda declaration and commitment to relevant Security Council resolutions, including 1701, remain crucial for the future of Lebanon. The new government will have to guarantee the stability of the country in this new political phase while adopting the necessary social and economic measures for the sake of all Lebanese.
The upcoming 2017 parliamentary elections will be another key moment for Lebanon’s democracy. The legislative framework should be agreed in a constructive spirit. The European Union stands ready to support them and will deploy an election observation mission upon invitation of the Lebanese authorities.
Finally, let me praise the role of Prime Minister Salam and Parliament Speaker Berri during the period of institutional crisis and commend the role of the Lebanese Armed Forces and all security agencies in providing security during this time. Lebanon has proven its resilience in many difficult circumstances: the European Union has always been, is and will stay at its side.”