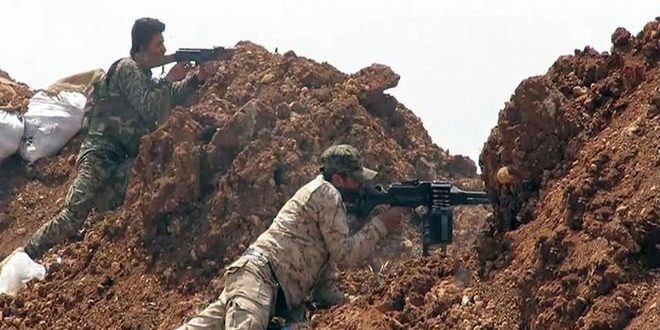 Syrian army and Armed Forces units, backed by the army air force, on Monday continued to launch wide-scale military operations against dens and positions of the Takfiri terrorist organizations in different areas across the country, inflicting heavy losses upon them in the personnel and equipment.

The source added that a number of the terrorist groups’ members were killed in the bombardments and others were injured as an amount of their arms, ammunition and equipment was destroyed.

SANA reporter said that army units on Monday morning carried out concentrated strikes against a terrorist group affiliated to the ISIS that had been targeting the cars and the passersby on the road of al-Sabboura-Ethrayia with shells and heavy machineguns in an attempt to cut the road that leads to Aleppo.

The reporter added that a 37-mm cannon was destroyed in the strikes and all members of the terrorist group were killed.