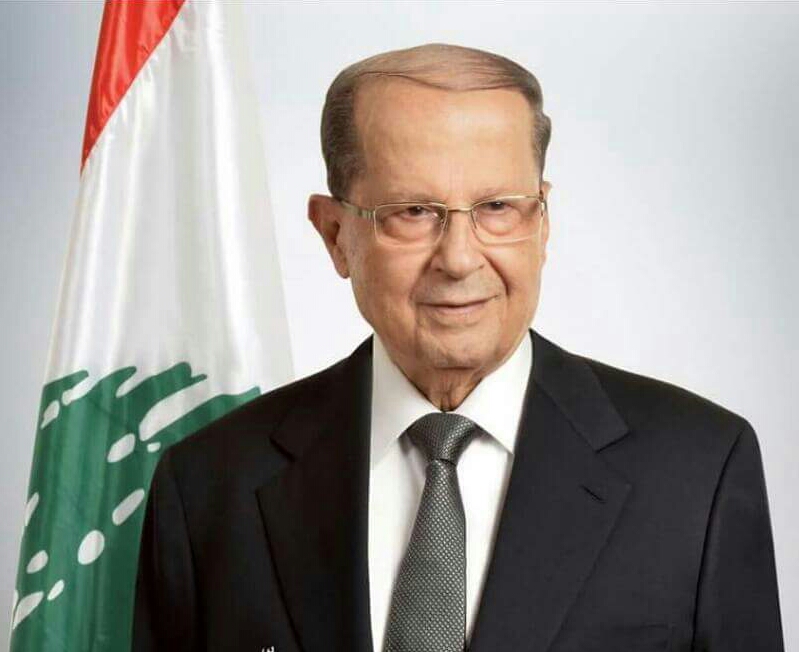 Today, Deputy Michel Aoun won Lebanon’s presidency in the third ballot of the second round, obtaining 83 votes. Thus, the 47th parliamentary session ended with the 13th president of the Republic, General Michel Aoun, who waited 26 years to come back to Baabda.

Aoun, who was chosen president by 83 lawmakers earlier today, arrived in Baabda afterwards escorted by an official convoy, and walked into the presidential palace as the army played the national anthem.

Lebanon’s new First Lady, Nadia Aoun, and the rest of the family later joined the president for the memorial picture, after he had been decorated as per the protocol.

The Directorate General of the Presidency issued on Monday the following statement:

“The President expressed his thanks to the Prime Minister and all ministers, and requested that the Cabinet acts as a caretaker until the formation of a new Cabinet.”

He then sat on the presidential seat at Baabda Palace and the Lebanese flag behind him.

Speaker Nabih delivered a word from the Parliament which he initiated by congratulating President-elect, General Michel Aoun, and the Parliament members.
“We congratulate you on electing a president at the toughest national, regional and international stage,” he told MPs.

“Allow me at the beginning to thank the Parliament in particular and the government of Premier Tammam Salam for the suffering they had to undergo together (…) so as to get to this moment. I am pleased to welcome you, Mr. President, under the dome of the Parliament,” he said to Aoun.

“Today, the Lebanese Parliament has completed the presidential election and has entrusted you, on behalf of the people, to bring the ship safe to shore amid the rocking waves surrounding us and threatening to divide our countries, as well as the countries of the Arab neighborhood,” Berri said.

Shedding light on the severe security threats of terrorism targeting Lebanon, as well as on the dreadful economic situation mainly caused by the major displacement flow, the Speaker said “the real threat to our country has always stemmed from the aggressions of the Israeli enemy for strategic reasons and for water-related greed.”

“A new maritime line has been drawn over our natural resources while Israel continues to obstruct the implementation of UN resolution 1701 and occupies precious parts of our land,” he went on.
“The aforementioned requires on the President — and you were once the Chief of the military institution — to provide the Army with what it requires of gear and personnel and to support the security institutions to be able to carry out the functions of defense, next to the resistance and the people.”

“One key issue remains essential, which is to stop the drain Lebanon’s human wealth,” Berri urged, calling not only to give back attention to the Ministry of Expatriates but also to allow the participation of expats in the political process.

“Mr. President, as a result of the political dilemma we lost a lot! The priority now is to agree on a modern electoral law and that, in my opinion, could only be achieved by the adoption of the proportionality and the emphasis on women’s quota and on the youth participation in voting. The transit from sectarianism to the State without damaging the sects only passes through such a law. Your election must be the beginning and not the end, and this council is ready to extend a helping hand for the sake of preserving Lebanon,” he concluded.

Newly elected President, Michel Aoun, gave his inaugural speech on Monday stating that the first step towards stability is “political stability”, which can only be achieved through respecting the Charter and Constitution.

He vowed to abide by decisions of the Arab League and enact a foreign policy that endorsed self-dissociation from the raging fires in the region.

“We will protect our country from the Israeli enemy and deal pre-emptively with terrorism until we obliterate it,” said Aoun.

“There is no solution in Syria without the return of the displaced. We must also confirm the right of return for Palestinians.”

Aoun explained that solving the dilemma of the Syrian refugees should happen with the aid of other states and in coordination with the United Nations.

While highlighting his work in the military institution and the sacrifices he made, Aoun hoped to be able to grant the Lebanese the stability they aspired for so that no citizen had to leave his/her homeland.