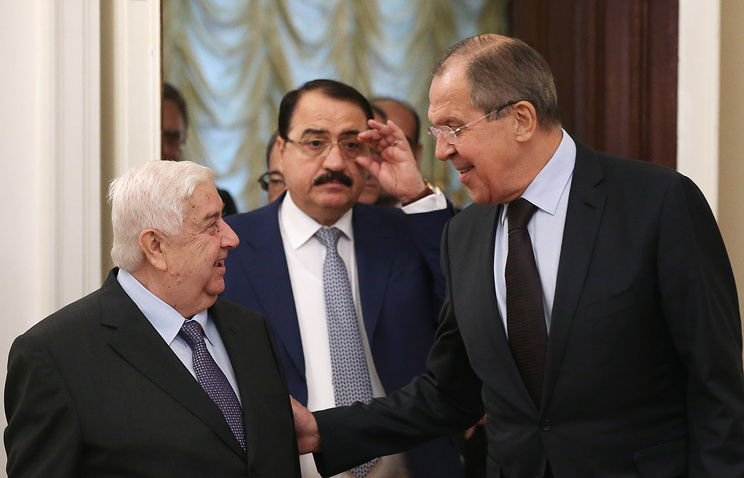 According to Sergey Lavrov, Russia and Iran welcomed Syria’s readiness to boost cooperation with the UN.

“Russia and Iran welcome the Syrian government’s readiness to enhance cooperation with the UN in solving humanitarian issues, that was confirmed today,” the Russian minister said. “We believe that the UN representatives should act impartially, refrain from responding to provocations, and do everything possible to confront terrorists in Syria.

Syrian government has no contacts with US-led coalition

The Syrian foreign minister said the government does not maintain any contacts with the US-led anti-terrorist coalition and questions its effectiveness.

“There are no contacts between the Syrian government and the coalition led by the US,” he said, adding that the coalition’s operation that has lasted more than two years yielded no results.

Damascus is certain that Washington is not eager to meet its commitments in regard to Syria, he added.

“The U.S. admits the roles of Russia and Iran (in resolution of the Syria crisis) but cannot cooperate with us,” Muallem said. “We have no trust in the United States. We are certain it will not meet its commitments.”

Responsibility for position of Syrians rests upon terrorists, West, its sanctions

The Russian top diplomat stressed the responsibility for the current position of Syrians rests upon not only on terrorists, but also on the West and its sanctions.

“We have been able to see for ourselves that it is a very useful format and that it allows for a meaningful and frank exchange of opinion on how to achieve compliance with the UN Security Council resolutions for settling the Syrian crisis,” Lavrov said. “We put the emphasis on the need for going ahead with and stepping up irreconcilable struggle against terrorism and simultaneously address the questions of improving the humanitarian situation, returning to the regime of the cessation of hostilities and urgently restarting intra-Syrian negotiations in compliance with UN Security Council resolutions without any double standards.”

“At negotiations with Iran we reaffirmed the fundamental support for the unity and territorial integrity of Syria. We agreed to work together to address the task of eliminating terrorists and restoring peace and civil infrastructures,” Lavrov said. He recalled that at a meeting of the international discussion club Valdai Russian President Vladimir Putin “suggested giving thought without delay to some equivalent of a ‘Marshall Plan’ for reconstruction in Syria.”

“We stated that the responsibility for the worsening o

We expressed the unanimity all countries must strictly follow the fundamental principles of international law, including non-intervention in the internal affairs, the non-use of the threat of force and the settlement of the arising disagreements by political means,” Lavrov said. “We are unanimous that attempts to dictate solutions from outside and to use double standards are unacceptable and that all issues must be resolved on the basis of mutual respect and equality through negotiations.”

“We supported the Syrian leadership in its determination to resume the political process on the basis of resolutions by the International Syria Support Group,” Lavrov said. “We welcomed Syrian Foreign Minister Walid Muallem’s promise a Syrian government delegation would be prepared to go to Geneva shortly for UN sponsored talks with the representatives of all opposition groups, just as UN Security Council resolutions require.”

The minister stressed Moscow, unlike its Western counterparts, is set to carry the fight against terrorists through to the end.

“Terrorists must be smashed,” Lavrov said. “When our Western partners are battling terrorism with words, we are full of determination to carry the matter through to the end with deeds.”

Russian-US agreements on Syria had begun with a statement that the top priority was to separate moderate opposition and terrorists, Lavrov said.

“Nonetheless, there was no progress, there is no progress and, to tell the truth, I do not expect any further progress, at least in the immediate future,” Lavrov said. “I am going to remind that this separation was linked to a seven-day ‘silence regime’ during which Americans promised to show us in their maps where there were terrorists and where not.”

“As of today, neither Russia nor Syria has been using their Aerospace and Air Forces around Aleppo for ten days,” the Russian foreign minister said. “Over this span of time the separation could have been done at least in eastern Aleppo.”

Appeals to cease the fire just reflected a desire to buy time and provide a respite for terrorists, he added.

Lavrov said prevention of foreign support for terrorists is a requirement of the UN Security Council and Russia will insist on compliance with that demand.

“Prevention of any support for terrorists is not somebody’s personal wish. It is a requirement of the UN Security Council. It is stated in its resolutions,” Lavrov said. “Any support, including support from abroad, is prohibited by the UN Security Council and we will insist on compliance with these UN SC requirements. We will be doing so in our contacts with the countries of the US-led coalition. We have the corresponding channels for the dialog.”

“In practical terms the decisions are to be made by the military,” he said. “These decisions must not always be made public. Our three countries and also Iraq at a certain point created a joint center in Baghdad to coordinate practical approaches to struggle against terrorists. I believe that this center has been very useful and may be of still greater use than before, bearing in mind that there is a real threat terrorists may be forced out of Mosul and redirected towards Syrian territory.”

Sergey Lavrov said after the talks with his counterparts that terrorists have now actually closed exit for Aleppo residents in Syria and no separation from the opposition has occurred.

“The situation in Aleppo is now seriously escalating,” the Russian foreign minister said.

“The ceasefire has been disrupted through the fault of the armed opposition. The United States and its allies in the region have failed or have shown no desire to ensure the implementation of the ceasefire regime by their subjects. This has endangered thousands of civilians in eastern Aleppo whom terrorists are using as a human shield,” he added.

“At the same time, proceeding from humanitarian considerations, Russia and Syria have suspended combat operations against terrorists,” Lavrov said.

“No flights of the Russian Aerospace Force and the Syrian Air Fore have been performed for already 10 days. The aircraft of our countries do not approach the frontline around Aleppo closer than 10 km,” the Russian foreign minister said.

“We counted very seriously that the humanitarian pause and the absence of aircraft’s operations would be used by our American partners to finally convince the so-called moderate opposition to dissociate itself from Jabhat Fateh al-Sham, the former Nusra [Jabhat al-Nusra outlawed in Russia], which is actually controlling eastern Aleppo and commanding all other armed opposition groupings located there,” the Russian foreign minister said.

“Very regrettably, such separation has failed again. Moreover, it is obvious that the terrorists have closed the exit from the city [Aleppo] through the humanitarian corridors. Instead of letting civilians leave, these corridors have turned out to be under militants’ aimed fire,” Lavrov said.

Terrorists’ exodus from Mosul to Syria

The Russian top diplomat stressed terrorists’ exodus from Mosul to Syria cannot be allowed, this issue will be discussed with the US.

“We also exchanged views on the situation in neighboring Iraq where the international anti-IS coalition has launched an operation to liberate Mosul,” he noted. “We are interested in taking measures, in collaboration with our Iraqi colleagues, to prevent terrorists’ exodus from Mosul with their weapons and heavy vehicles, which will, of course, aggravate the situation in Syria.”

“We believe it is important not to allow this, we will discuss the issue with both the Americans and other members of their coalition,” Russia’s top diplomat said. “We cannot let terrorists leave (Mosul) so they could redirect their activities towards Syria.”.

Lavrov added that joint center in Baghdad could be be more relevant than before, including in light of situation in Mosul.