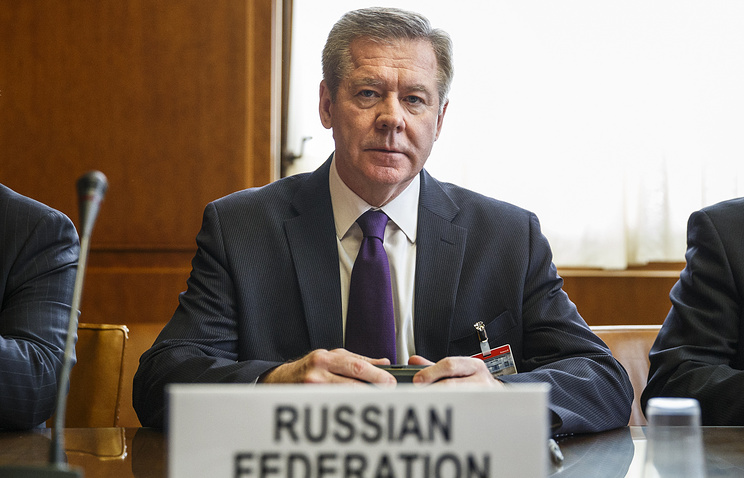 “Russia speaks against politicization of probe into chemical attacks in Syria”

“The main thing we speak against is politicization of this problem, this issue [investigation of chemical attacks in Syria],” Gatilov, in Jerusalem on a visit, said.

He said the United States “uses the issue in all ways to pressure the Syrian government in order to keep it constantly on the hook, to use these facts, which, by the way, have no serious substantiation to move the issue to the Security Council and then adopt decisions and resolutions that would give an opportunity for some other actions, including military.”

The UN Security Council on Thursday held a monthly closed meeting on the situation with the use of poisonous agents during the conflict in Syria, during which it discussed the final report of the Joint Investigative Mechanism (JIM) of the United Nations and the Organization for the Prohibition of Chemical Weapons (OPCW).

UN and OPCW investigators accused government forces in three cases of using poisonous agents, and Islamic State terrorists in one.

Syria agreed to pass its chemical weapons to the international community for subsequent destruction in 2013 in the framework of a deal struck between Moscow and Washington. The deal was fixed by the UN Security Council’s resolution, which warned that in case anyone uses chemical weapons in Syria, measures will be taken.

Russia believes it to be optimal to start talks on political settlement in Syria as soon as possible, Gatilov said on Friday.

“Our key goal is to resume political settlement,” Gatilov said.

He said “it would be optimal to start talks on political settlement as soon as possible.”

Gatilov recalled that Russia “has repeatedly called on Mr. [UN chief’s special envoy on Syria Staffan] de Mistura to appoint the next intra-Syrian round of dialogue.”

“For the time being, the situation is such that it probably objectively prevents this from being done for well-known reasons, so there are no dates on the new round of talks as of today yet,” he said.

“It’s yet hard to predict how events will develop,” Gatilov said, adding that “the situation in Aleppo, in Eastern Aleppo is now in the focus of the international community’s attention.”

The Russian deputy foreign minister said “there are no plans yet” to hold another meeting in the Lausanne format.

“The latest meeting took place in Lausanne on October 15 in a narrow format; the situation was discussed in detail at it,” he said.

According to Gatilov, Russia hopes humanitarian pauses in the Syrian city of Aleppo will be used for assisting civilian population.

“We’re ready to continue the humanitarian silence, humanitarian pauses, but we expect they will be used for practical help to civilian population so that it could be evacuated via humanitarian corridors,” he said.

Humanitarian pauses were on around Aleppo on October 20-22 inclusive, fire was ceased from 08:00 to 19:00. Eight humanitarian corridors were overall opened for withdrawal of militants and civilians from the city.