Home » Economy » What did Putin say about Kerch Bridge? 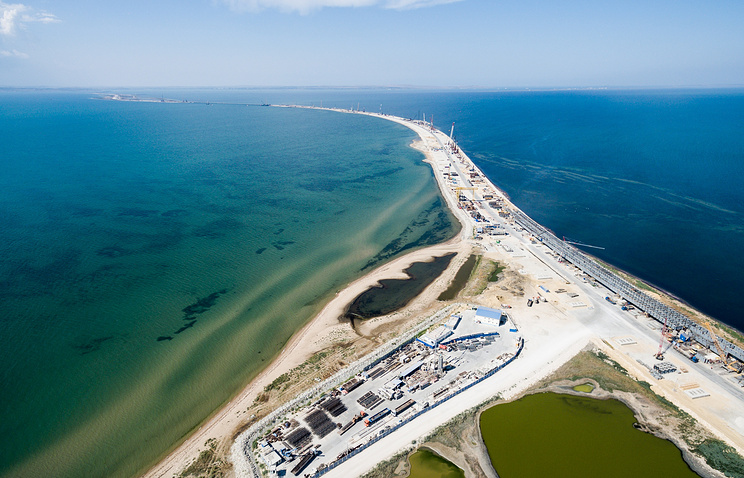 What did Putin say about Kerch Bridge?

“According to preliminary estimates, this bridge crossing (furthermore, trains will also go to both sides there) covers 14 mln tourists and somewhat up to 13 mln vehicles capable to travel,” the President said.

Putin said he is aware of a bottleneck that may be formed when the four-lane Kerch Bridge will turn into the two-lane motorway. The decision was made at the first stage to make two lanes so that not to stop traffic completely, the Head of State said. “Then the road existing at present will be practically rebuilt; it will be actually a new road in the same corridor,” Putin said. “However, the old road will be in service when the new one will be after construction. When the new road will be built, we will start tackling the old one. Essentially it will also be a new road and eventually there will be a four-lane traffic, just as on the bridge,” the President added.

Putin said on Wednesday that Crimea’s energy and electricity provision problems would be fully resolved in the next two years.

“The problems have not yet been fully solved,” the Russian leader said at the All-Russia People’s Front Action Forum in Crimea.

As President Putin said, “a mainstream gas pipeline is to stretch to Crimea by the end of this year.”

In Putin’s estimate, “from this moment, true and full-fledged gas supplies will begin and electricity will already be provided from the peninsula’s own generation as gas will be the primary source.”

Work is under way in Crimea to build an electric power plant that will fire gas, the Russian president said.

“From this moment, already real, stable and what is called incremental gas supplies and electric power provision will begin for the entire peninsula,” Putin said.

In the Russian president’s opinion, “this will already be another life and other possibilities, including for the development of other industries.”

Putin cited water desalinization and the development of Crimea’s recreational potential as an example.

The head of the Russian state warned that “in this regard, it is necessary to synchronize the arrival of the mainline pipeline with the division of gas supplies by consumer.”

“This should be done by the republican and urban authorities and it is also necessary to stipulate in advance federal assistance on pipes,” Putin said.

“Issues will be radically solved from the end of this year and in the subsequent years of 2017-2018. These problems will be fully resolved absolutely and for many years to come,” the Russian president said.

The president went on to say that more than 40 billion rubles will be invested in improving fresh water supply in Crimea in 2015-2020.

He recalled that the fresh water problem in Crimea had been very acute at a certain point, “in particular, when our neighbors disconnected the peninsula from the North Crimean Canal.”

By now the acuteness of this theme, in particular, fresh water supply, has been eased, although the problem is still there.

“We have used more than 23 billion rubles for addressing this issue. In 2015-2020 another 40 billion rubles is reserved in the federal program for Crimea’s development,” Putin said. He pointed out that the money should be spent rationally and the expected result achieved by drilling wells and building water ducts and water purification facilities.

“The federal and regional bodies of power are expected to resolve this problem and they will resolve it. I have no doubts about that. Russia is capable of addressing this issue and we will address it. The question remains how to ensure rational spending,” Putin concluded.