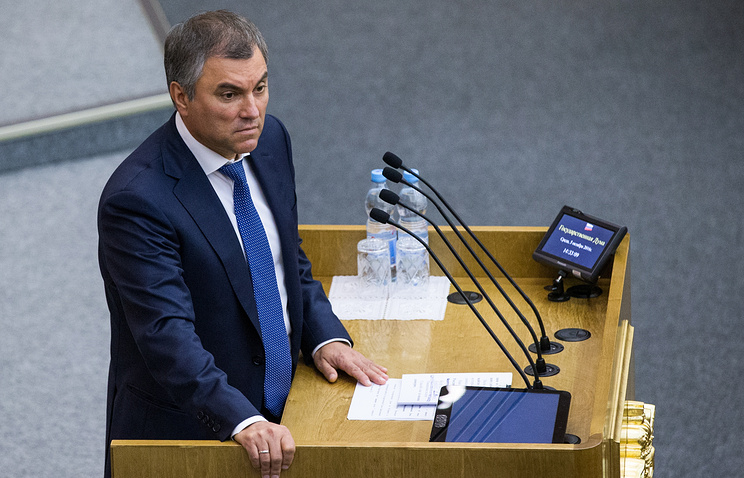 Speaker of the Russian State Duma lower parliament house Vyacheslav Volodin has confirmed his readiness to meet with President of the Parliamentary Assembly of the Council of Europe (PACE) Pedro Agramunt to discuss development of inter-parliamentary relations.

“Answering the PACE President’s request for a personal meeting, Vyacheslav Volodin confirmed his readiness to hold such a meeting and continue discussion of the development of inter-parliamentary relations,” the website of the Russian lower parliament house said on Friday citing Volodin’s letter to Agramunt.

In a letter addressed to Duma Speaker Vyacheslav Volodin earlier this week, PACE’s President Pedro Agramut noted that the assembly, being one of the statutory bodies of the Council of Europe, should be a venue for political dialogue between the parliamentary delegations of all its 47 member states. Thus, he hinted at Russia’s necessary return to PACE.

In his reply letter, Voloding noted that “Agramunt’s approaches to PACE as a venue for political dialogue and mutual communication between parliamentary delegations from all the 47 member nations can only be hailed.”

“I hope the fact that we have similar points of view on the basic principles of democracy and parliamentarism, which exclude deprivation of any country’s delegation of the right of vote and its competences, will make it possible to resume comprehensive dialogue within the Parliamentary Assembly of the Council of Europe,” the letter reads.

In April 2014, the Russian delegation to PACE was stripped of key rights, including the right to vote and take part in the assembly’s governing bodies, following the developments in Ukraine and Crimea’s reunification with Russia. The issue of restoring the rights of the Russian delegation was raised at PACE twice throughout 2015 but the sanctions are still in place: Russia is deprived of the right to vote and cannot take part in the Assembly’s governing bodies and election monitoring missions. In response, Russia suspended its participation in the PACE activities till the end of 2015. In January 2016, Russia refrained from applying for confirmation of its rights for 2016.

Following the Russian parliamentary elections of September 18, the lower house began to form a new delegation to PACE.