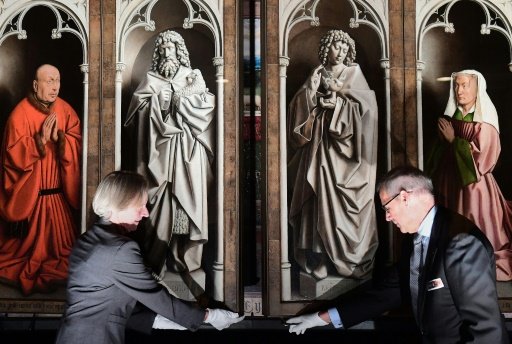 A painstaking restoration of a 15th-century Flemish masterpiece is revealing the long-lost detail and splendour that helped make the altarpiece one of the world’s most stolen artworks.

“The Adoration of the Mystic Lamb” by the Van Eyck brothers was unveiled 600 years ago at Saint Bavo’s Cathedral in Ghent, but since then its full glory has dimmed, after being split into pieces, seized by Napoleon, then the Nazis, and nabbed by thieves.

“You could say it is like the rediscovery of Michelangelo’s Sistine Chapel after its restoration,” Marie Postec of Belgium’s Royal Institute for Cultural Heritage told AFP.

“The original was hidden by layers of dirt and alterations, the colours had completely faded. Today, the same thing is happening here, and we have the chance to witness its rebirth,” Postec said.

The giant altarpiece, which measures 4.4 metres by 3.4 metres (15 feet by 10 feet), is attributed to Hubert Van Eyck and his better-known brother Jan, and was completed in 1432 when Ghent in modern-day northern Belgium was the wealthy powerhouse of the European wool cloth trade.

The “Mystic Lamb” depicted on the lower central internal panel represents Jesus, and also refers to the emblem of the wool merchants guild which played a hugely important role in the city.

Nazis, Napoleon and a salt mine

Returning a restored “Mystic Lamb” to St Bavo’s Cathedral is nearly the end of the story but there is — literally — one piece still missing.

In 1934, thieves stole two of the work’s 12 panels. One was recovered but the other, that of “The Just Judges”, remains unaccounted for to this day.

That capped an incredible history of upheaval for the artwork that began in the Reformation, when it was hauled up the cathedral tower to protect it from attacking Protestants.

Two centuries later, panels that had been seized by the French were returned to the church by the Duke of Wellington after his victory at Waterloo against Napoleon.

Then in World War II, the altarpiece was sent to the Vatican for protection but again ended up in France and was seized by the Nazis who hid the panels in an Austrian salt mine. The US army eventually saved them.

The complex work includes hinged panels that can be opened and closed to offer worshippers two very different views.

At the heart, or interior, of the work, there are three vibrant scenes, each one made up of four painted panels. The two outer scenes can be closed, meeting in the middle to cover up the central scene. On the reverse, or exterior, these panels are painted with more sombre imagery.

Begun in 2012, restoration work has so far been completed on the exterior panels, which worshippers saw most often as the altarpiece would have been kept closed, except for major holy days and festivals.

In relatively muted tones — compared with the splendour and richness of the interior — they show the Annunciation, John the Baptist, the patron saint of Ghent — and the wealthy merchant and church warden Joos Vidjt and his wife Lysbette who donated the work to the cathedral.

But even these external panels show newfound life after the removal of a yellowish sheen which had drained the colours of their vibrancy.

The painting is complex, densely detailed and full of symbols relating to passages in the Bible and daily life at a time when Ghent was ruled by the Dukes of Burgundy, whose court was among the most flamboyant and refined in late medieval Europe.

During the work, the team of 10 restorers have had to very delicately chip away, centimetre by centimetre, at layers of discoloured varnish and the “repainting” of early preservation efforts, some of which may date back to the 1500s.

“Nowadays, we would not cover over the original work but then, restorers would really have been painters themselves who would have repainted the whole thing, rather than just minutely retouch it bit by bit,” Postec said.

“Before, there was just a uniform black background but we have found space, light,” she said.

“We have also found folds (in the clothes) from the 15th century which were simply painted over and (this sort of detail) really changes how you see the picture.”

Restoration work will now begin on the internal panels at the nearby Ghent Fine Arts Museum with the aim of finishing by 2020, when there will be a celebratory year dedicated to Van Eyck paintings.

Until then, reproductions will have to suffice for the thousands of visitors who come to Ghent to see a painting many consider second only to Leonardo Da Vinci’s “Mona Lisa” in artistic achievement and cultural importance.