Home » Manchet 2 » Iraq forces advance on IS stronghold of Mosul 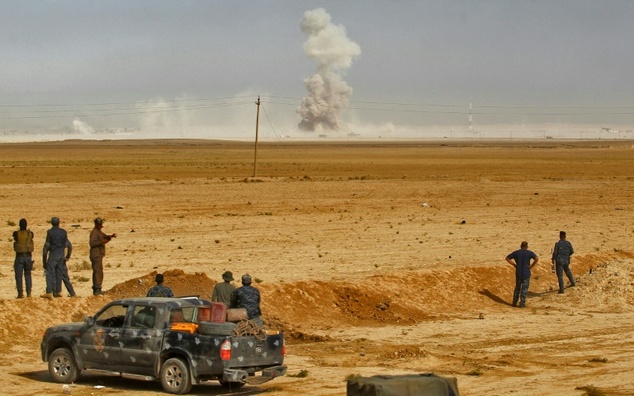 Iraq forces advance on IS stronghold of Mosul

Iraqi forces are “ahead of schedule” in an offensive aimed at retaking Mosul and dealing a death blow to the Islamic State group, but the battle will be difficult and protracted, the Pentagon has said.

The start of the long-awaited assault raised deep concerns for hundreds of thousands of civilians trapped in Iraq’s second-largest city, with aid groups warning of a massive humanitarian crisis.

Some 30,000 federal forces are leading the offensive, backed by air and ground support from a 60-nation US-led coalition, in what is expected to be a long assault on IS’s last major Iraqi stronghold.

Iraqi forces readied weapons and ammunition as columns of armoured vehicles headed towards Mosul from the town of Al-Shura, some 45 kilometres (30 miles) south of the city.

The Pentagon said late Monday the operation had begun well but warned it would be a “difficult campaign that could take some time”. A top US general earlier said it would take several weeks or even longer.

“Early indications are that Iraqi forces have met their objectives so far, and that they are ahead of schedule for this first day,” Pentagon press secretary Peter Cook said.

Prime Minister Haider al-Abadi had announced the beginning of the assault in a televised address earlier in the day.

The jihadists have suffered a string of territorial defeats this year in both countries, and the retaking of Mosul would all but end their presence in Iraq as a land-holding force.

Iraqi forces have been closing in on Mosul in recent weeks but the battle begun Monday could be the toughest yet against IS.

IS forces are vastly outnumbered, with the US military estimating 3,000 to 4,500 jihadists in and around Mosul.

In an online statement after the assault began, IS claimed it launched a series of deadly suicide car bombings against Iraqi forces.

Early Monday, federal forces moved from their main staging base of Qayyarah, south of Mosul, as peshmerga forces from the autonomous Kurdish region advanced from the east.

Several villages were promptly recaptured and peshmerga forces had moved to the edges of Qaraqosh and Bartalla, two Christian towns IS seized in August 2014, commanders said.

The UN’s humanitarian coordinator in Iraq, Lise Grande, told reporters that an exodus could begin within a week and some aid groups worried about preparedness.

“It is estimated that as many as 200,000 people could flee from the city in these first weeks, though there are currently only 60,000 tents available in seven emergency camps,” the International Rescue Committee said.

“It could add fuel to the sectarian fires raging in the region and so we have urged the Iraqi government not to use the Shia militias. That is the greatest danger that we see,” he said.

Iraqi forces advancing on multiple fronts are some distance from Mosul and are expected to eventually take up positions on the city’s edge and lay siege before breaching its boundaries and directly engaging die-hard jihadists.

Most of the coalition’s support has come in the shape of air strikes and training, but US, French and British special forces are also on the ground to advise local troops.

“This is a decisive moment in the campaign to deliver ISIL a lasting defeat,” US Secretary of Defence Ash Carter said, using an alternative acronym for IS.

President Recep Tayyip Erdogan on Monday indicated that Turkey would also play a role in the offensive despite concerns raised by Baghdad.

As the biggest Iraqi military operation since the 2011 withdrawal of US troops unfolded, a Turkish delegation arrived in Baghdad for talks and coalition defence ministers agreed to meet in Paris on October 25 to take stock.

IS once controlled more than a third of Iraq’s territory but its self-proclaimed “state” has been shrinking steadily. It lost its emblematic bastion Fallujah in June, the Anbar provincial capital Ramadi months earlier and on Sunday Syrian rebels retook the town of Dabiq, which held special ideological significance for the group.

If Mosul falls, only Raqa in Syria would remain as the last major city in either country under IS control. But even the recapture of Mosul will not mark the end of the war against IS, which is likely to increasingly turn to insurgent tactics as it loses more ground. Just hours after the offensive began, IS claimed responsibility for a suicide car bombing targeting an Iraqi army checkpoint south of Baghdad that killed at least 10 people.