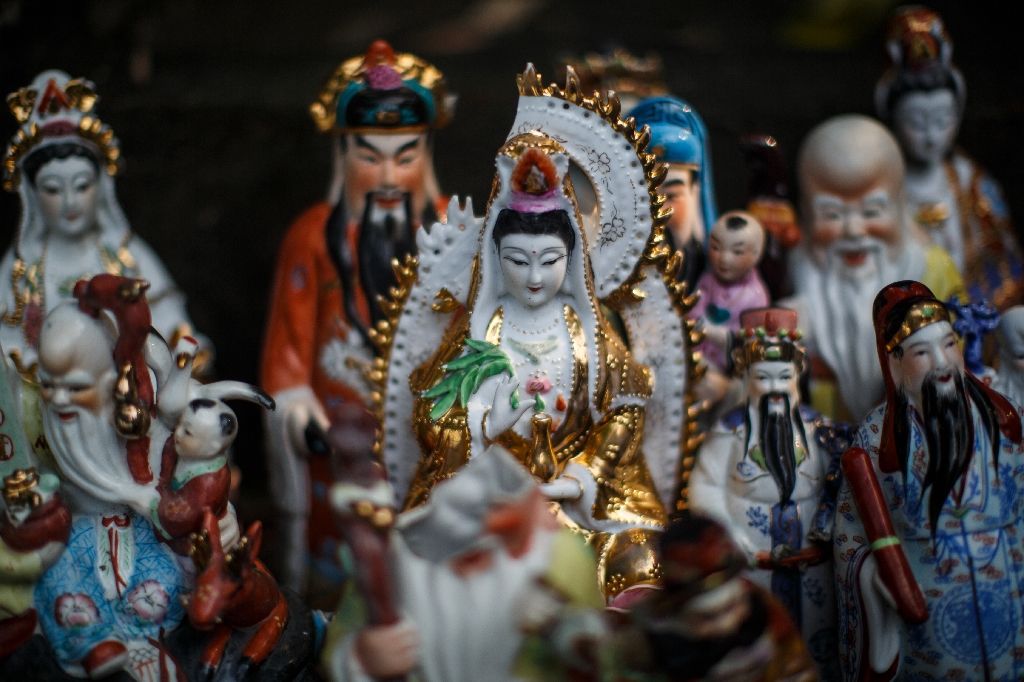 Tucked away on a coastal Hong Kong hillside is a different type of recycling point — here, thousands of unwanted statues of deities look out to sea, gathered and repaired after their owners discard them.

Dedicated volunteer Wong Wing-pong attends to the colourful collection of figures which are perched on a rocky slope running down to the sea in the south of the city.

Twice daily he sweeps away leaves and burns incense sticks as offerings to the unwanted gods, ranging from Buddhist and Taoist to local deities and Christian icons.

A retired butcher, 85-year-old Wong has been looking after the statues for 17 years after stumbling across a small neglected collection on the outskirts of the site, near the residential district of Wah Fu, while he was out walking.

Back then there were a dozen unattended statues, some broken. Now the spot has grown into a popular destination for discarded figures, and is known locally as “A sky full of gods and Buddhas”.

Wong says new statues arrive every month from a number of sources — restaurants that are undergoing renovation, private homes where they can no longer be accommodated.

He spruces them up and some who have donated figures still come to worship them.

“No one should demean god. If they are out here, we should treat them well,” Wong told AFP.

“If they are broken, I will glue them back together…I don’t dare throw them away. It goes against the conscience.”

Residents say they are thankful to Mr Wong.

One woman in her 80s, who gave her name as Ms Wan, said she still visits statues of local deities Guan Yin, goddess of mercy, and Guan Yu, inspired by a Chinese general, which she left at Wah Fu five years ago.

“The place is very well kept. I am thankful to him,” said Wan, who removed the figures from her home because some of her relatives converted to Christianity and did not want them on display.

Another resident, 65-year-old retiree Tse Sum swims off the shore near the site every day and also praised Wong for his dedication.

“If they are dumped they are trash,” said Tse of the unwanted gods.

“But if they are kept in order, they can be works of art.”

Religion and local customs permeate Hong Kong, where Buddhist and Taoist temples are common and incense offerings are regularly burned outside local businesses.

Private homes often have a shrine to a local deity, with Christian churches and mosques also in the mix.

But with space at a premium in a city were rents are sky high, informal collections of discarded gods often decorate roadsides and public spaces.

In a leafy park next to a police station in the northern district of Fanling, around 30 statues sit quietly under the branches of a banyan tree.

Unlike Wah Fu, this site is not cared for daily by a guardian, but still draws visitors.

Yoyo Ng, 54, has come to leave a Guan Yin statue, one she kept for more than 30 years, saying she had to remove it from her home to make room for new tenants.

“I didn’t want it to go…Hong Kong is just too small. I had no choice. I keep it in the shade so it’s not exposed to sunshine,” says Ng, who works at a rehabilitation centre for the disabled.

To Ng, leaving the statue in the park means she can continue to worship it regularly there. She said volunteers from her neighbourhood in Fanling come several times a month to clean the figures.

Discarded deities have disappeared from some areas over the years — residents say they are unsure who was responsible or why they were removed.

The government says it has no specific policy of clearing them, although they may be taken away if they are blocking the footpath.

Wong says he has no intention of abandoning the figures at Wah Fu. Looking after the statues has given him peace of mind.

“I feel I’m more healthy now. I have good sleep,” he says.

“I will come here until I can’t walk…I don’t care which religion they belong to. I will look after all of them.”