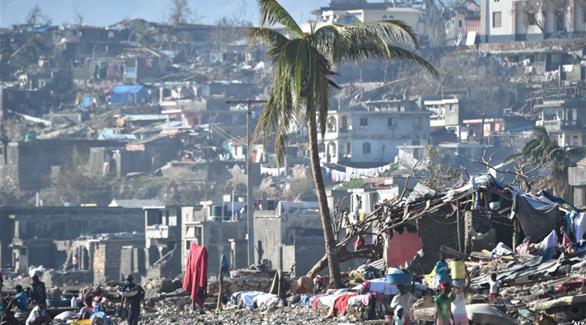 UN Secretary-General Ban Ki-moon will travel to Haiti on Saturday to visit areas devastated by Hurricane Matthew as a UN funding appeal for the Caribbean nation drew few donors.

Ban will visit Les Cayes on Haiti’s southern coast — one of the cities hardest-hit by Matthew — and meet with Haitian leaders, his office said.

The United Nations has launched a flash appeal for US$120 million to help Haiti cope with its worst humanitarian crisis since the 2010 earthquake.

Only $6.1 million has been raised so far, equal to 5 per cent of the total appeal, said UN spokesman Stephane Dujarric.

At least 473 people were killed when Matthew crashed ashore on October 4 as a monster Category 4 storm, packing winds of 230km per hour.

Ban said on Monday that a “massive response” was needed to cope with the destruction, with 1.4 million people in need of urgent assistance after towns and villages were almost wiped off the map.

Anger has been mounting among some residents in remote areas of Haiti where several humanitarian convoys have been blocked by barricades, and in some instances looted, on their journey across the southern peninsula.

The director of the UN’s World Food Program denounced those attacks, saying that they “will delay our effort to bring food to the public.”

“Unfortunately, there are people trying to take advantage of humanitarian efforts and we have lost food to theft,” said Carlos Veloso, the WFP country director in Haiti.

The US Agency for International Development announced on Thursday more than $12 million in assistance to communities hit by the hurricane, bringing the US government’s total immediate relief in Haiti, Jamaica and the Bahamas to nearly $14 million.

Along with the US Department of Defense, USAID on Wednesday flew 13 missions to Haiti’s Grand Anse and Sud departments. To date, USAID has delivered some 159 metric tons of emergency supplies.

Separately, the UN Security Council decided to extend the mandate of the MINUSTAH peacekeeping mission in Haiti for another six months, until April 2017.

UN mission chief Sandra Honore told the council this week that the extension would help Haiti deal with the humanitarian crisis and ensure political stability after elections were postponed.

Ban will also travel to Ecuador to attend the Habitat III conference on housing and sustainable urban development.