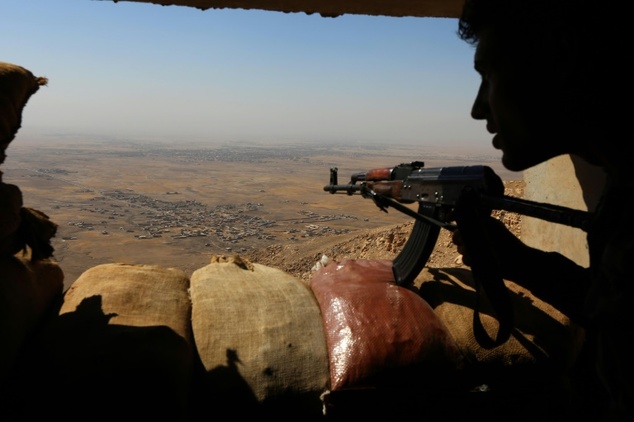 While the Pentagon has previously said the Islamic State group uses simple, commercially available drones to conduct surveillance and carry small explosives, this was the first known deadly case.

According to a US defense official, the incident unfolded October 2 when a small plane with a styrofoam body was either shot down or crashed in Erbil in northern Iraq.

Two local Kurdish peshmerga fighters grabbed it and took it back to their camp to inspect and photograph it, when it blew up.

“It looks like the explosive charge was hidden inside of what appeared to be a battery on some sort of a timer,” the official said, speaking on condition of anonymity to discuss the matter.

A French source earlier confirmed the use of a “booby-trapped drone in Iraq,” while another confirmed that two French soldiers were hurt in the incident.

One of the French soldiers has life-threatening injuries. Both have been flown back to France for treatment.

Colonel John Dorrian, a spokesman for the US-led coalition fighting IS in Iraq and Syria, described the incident as a “Trojan Horse-style” attack.

“There was an improvised device on a drone. And when that was brought back to the camp, it exploded,” he said.

US defense officials said the military was deploying additional anti-drone technologies to the theater, including systems that provide electronic jamming.

“We don’t just let the enemy develop a capability that threatens our forces and those forces of our allies and partners and leave that threat unaddressed,” Dorrian said.

France is part of the international coalition fighting IS, which is preparing for a major offensive to dislodge the jihadist group from Mosul, which lies 85 kilometers (53 miles) from Erbil.

Around 500 French soldiers are based in Iraq, where they advise the peshmerga and train Iraqi elite forces in Baghdad. About 5,000 US troops are in Iraq.

US defense officials stressed IS drones would have zero strategic impact on the upcoming battle to wrest control of Mosul from IS.

“The implications of this are certainly not an existential threat and not something that’s militarily significant in that it’s going to stop anything that needs to happen from happening,” Dorrian said.

The unnamed defense official said the biggest implication was guidance being issued across the coalition to not pick up any drones.

“Treat them as unexploded ordinance,” he said.

“You see a drone sitting on the ground, don’t pick it up,” and call a bomb disposal expert, he added.