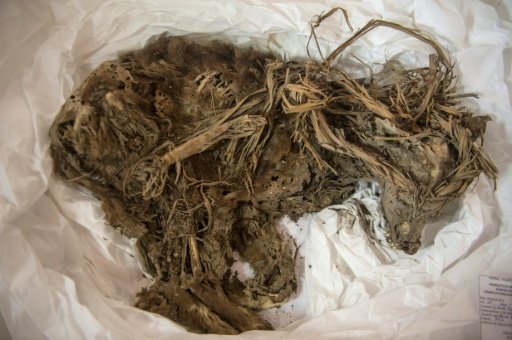 As lions, tigers and bears roam lazily about Peru’s largest zoo, archeologists are busy digging up stranger animals from the ground beneath them.

The zoo, the Park of Legends in the capital, Lima, is also the burial site of scores of ancient dogs apparently sacrificed 1,000 years ago at the funerals of fallen warriors, whose remains lie beside them.

The dogs, sacrificed by the Ichma, are often found with ropes still tied around their necks, which bear the telltale signs of animal sacrifice: slit throats or strangulation wounds.

Surprisingly, their fur is still intact.

Their human companions’ remains often show signs of violent injuries to the skull and ribs, which is how researchers deduced they were warriors.

“All indications are that they were killed in clashes with other social groups,” said Lucenida Carrion Sotelo, head of archeology at the park.

The dogs’ bodies are always arranged “as if they were sleeping,” she added.

“For the Ichma, sacrificing a dog was probably part of a warrior’s funeral rites.”

In all, the remains of 138 dogs and 134 humans have been found since 2001 inside wak’a, or sacred sites, located inside the Park of Legends.

These adobe monuments were used for religious rites and funerals. Carrion said archeologists have only just begun uncovering the secrets inside the park’s 54 wak’a.

“There is so much for researchers to discover in every one,” she told AFP.

The last find was in September, when her team uncovered a tomb with the remains of 10 dogs, two cuys — a South American guinea pig — and one human.

The dogs found so far are all members of the same species, a short-haired variety with a black spot on its back that would have weighed about seven to 20 kilos (15 to 45 pounds), said Carrion.

Initial research indicates they were killed 1,000 years ago, but further testing is being done to fine-tune that estimate, she said.

The remains are valuable for scientists researching the origins of South America’s domesticated dogs, because they can potentially shed light on where pre-Incan dogs came from and why humans raised them.

By the time of the Incas, dogs were deeply ingrained in the region’s cultures.

The Peruvian Hairless Dog, the best-known species, appears in Incan ceramics. The black, bare-skinned dogs, which still exist today, emerged around the year 300. They were declared part of Peru’s national heritage in 2001.

And in 1993, researchers found 100 mummified ancient dogs buried alongside human remains in the southern region of Moquegua. They resembled modern-day Golden Retrievers, but with short legs and a bristly tail.

Today, visitors to the Park of Legends can stroll among the ruins of wak’a, palaces and canals.

It took researchers 15 years just to uncover the first eight wak’a and begin exploring them. The 46 others remain entangled in thick vegetation.

Many of them have been looted and vandalized.

One wak’a, called San Miguel — believed to be the site’s administrative and ceremonial center — held the remains of a man and a woman who had 17 fish tattoos on her arm.

“It appears these people were an offering made when construction began,” said Carrion.

But archeologists need more funds to continue their research, she said, appealing to foreign universities and foundations for help unravelling the many mysteries of the wak’a.