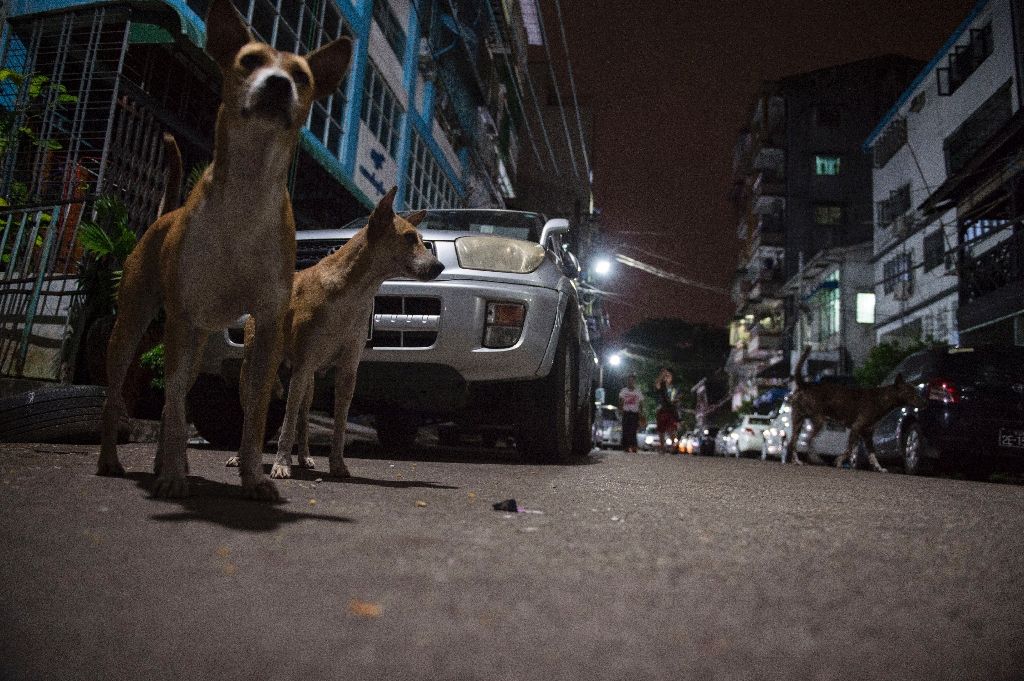 The dart hits a fleeing street dog in the thigh, the bright orange tip sagging against his brown and white fur as he slows to a halt, his limbs succumbing to the sedatives.

The mutt is one of more than 100,000 strays that roam the streets of Myanmar’s commercial capital Yangon, sleeping in doorways, nosing through rubbish and barking their challenges to each other late into the night.

He is actually one of the lucky ones — the sedated animal is among several hundred that will be vaccinated and neutered during a three-month city campaign in Yangon’s southern Lanmadaw township.

Loved by some and loathed by others, local authorities have for years tried to contain the swelling packs of dogs by feeding them poisoned meat.

But animal rights activists have lobbied the government to change tack, arguing that the killings do little to contain the population or stop the spread of rabies.

As the drugs kick in, a worker muzzles the limp dog and ties his paws together with twine.

He is carried to a makeshift operating table outside, where he is swiftly dealt with by a vet and placed next to several other sleeping dogs.

Later, the animals will be released back onto the streets with red collars.

“I love the dogs,” said local resident Moe Lwe Lwe, who has been feeding them rice and curry for 18 years and helps with the sterilisation programme.

“They are very cuddly. I am nuts for them.”

Myanmar has the second-highest rate of rabies in Southeast Asia, according to the World Health Organisation, although vaccination programmes have helped stem the number of cases.

Some say authorities dislike neutering because of the belief held by Buddhists, the religious majority in Myanmar, that karmic retribution will leave you infertile in your next life.

Leaving poisoned meat, on the other hand, is seen as free of spiritual consequences because the dogs opt to eat the food on their own.

Others say sterilisation is an expensive option for a country where one in four lives below the poverty line.

But images of dog corpses strewn across the city’s pavements spread on social media have shocked the public.

In response, Yangon officials signed an agreement with US animal NGO Humane Society International in March to begin a city-wide vaccination and sterilisation scheme.

The joint-programme has yet to get started, but the charity said it hopes to emulate the success of similar campaigns in countries like Nepal, India and Bangladesh.

Other animal-lovers like Terryl Just, an American who founded the Yangon Animal Shelter which cares for some 500 rescued dogs, argue the animals could become a tourist draw for the city.

“We’ve adopted some out to the States — LA, Seattle, Washington, California — to people who have visited Yangon,” she said.

“Tourism is huge and booming and I think interest in the dogs is growing as you have more expats coming in, and more awareness.”