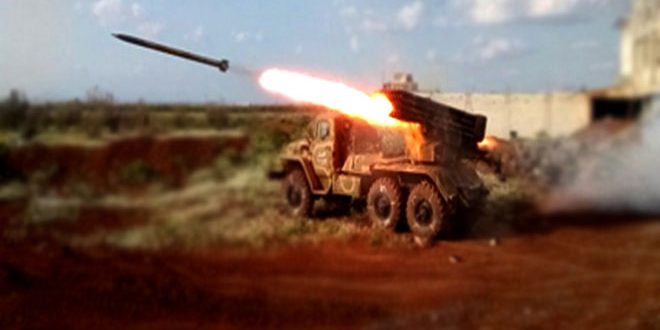 Army and Armed Forces units, backed by the army air force, today launched more military operations against dens and positions of the Takfiri terrorist organizations in different areas across the country, killing scores of terrorists and destroying their arms and ammunition.

An army unit clashed with ISIS terrorists along the eastern barricade of Dier Ezzor military airport, inflicting heavy losses upon them in personnel and equipment and destroying their weapons, a military source told SANA on Monday.

Another army unit carried out intensive strikes on the positions and gatherings of ISIS terrorist organization in the vicinity of Panorama area on the southwestern outskirts of Deir Ezzor city, killing a number of terrorists and injuring others.

Army units destroyed a convoy of Pickup vehicles equipped with machineguns and targeted gatherings for the terrorist organizations in Ein Hussein al-Janoubi village, 24 km to the northeast of Homs city.

A number of terrorists were killed and injured and their weapons and ammunition were destroyed in intensive airstrikes against their gatherings in al-Saan al-Aswad in Talbeiseh area in Homs northern countryside.

The Syrian army air force carried out a number of sorties against gatherings and monitoring centers of terrorist organizations affiliated to the so-called “Jaish al-Fateh” to the south of Aleppo City and in its western countryside.

In the western countryside, the Syrian army air force destroyed a number of the machinegun-equipped vehicles belonging to the terrorist organizations in the village of Qabtan al-Jabal and killed scores of terrorists.

A number of terrorists were killed, others were injured and their fortifications were destroyed in an airstrike carried out by the army air force against their dens and one of their gatherings on the southern outskirts of Aleppo City.

An army unit killed a number of the ISIS terrorists in the surroundings of Khirbet Saad in the northeastern countryside of Sweida southern province.