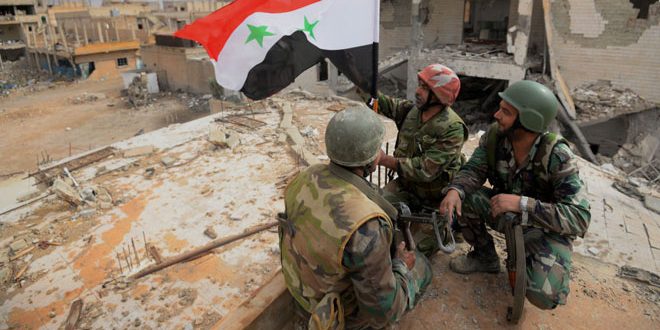 The Syrian army continues to make advances in several provinces, driving out terrorist organizations from a number of areas, mostly in Aleppo.

An army unit in cooperation with the supporting forces carried out a “swift” military operation against terrorists’ positions and fortifications in the strategic al-Sheikh S’eed hill at the eastern parts of Aleppo city, establishing complete control over the hill and killing or injuring many of the terrorists, a military source announced on Friday.

The remarkable advance comes hours after establishing firing control over Aleppo Hill to the southwest of al-Breij and establishing control over the Sport Institute, its housing compound and a school in Bustan al-Basha neighborhood and over the buildings and towers of the Electricity Company north of al-Sakhour roundabout on the northeastern outskirts of Aleppo city.

The Syrian Air Force destroyed a training camp for terrorists, leaving tens of them dead or injured, to the east of al-Dana village in the countryside of Idleb province.

A number of vehicles for “Jaish al-Fatah” terrorists were destroyed in army air strikes  in al-Zallaqiat, Soran, Khneifees and Tleissiyeh in the northern countryside of Hama.

Army units destroyed Jabhat al-Nusra terrorists’ fortifications, monitoring centers and vehicles to the west of the old Customs building, in Wadi al-Zaidi, to the east of Khazan al-Kark, Dam Road neighborhood, to the east of Busra roundabout and to the east of Electricity Company in Daraa al-Balad area in Daraa province, killing many of the terrorists.

An army unit destroyed a booby-trapped vehicle for ISIS before it reached one of the military points in al-Barda area/ Qasr al-Hayr al-Gharbi in the eastern countryside of Homs, according to military source.

The source said that the Syrian Air force launched airstrikes on ISIS movement axes in the area surrounding Shaer Oil field to the northwest of Tadmour (Palmyra) city, destroying a number of tanks and armored vehicles and killing a number of terrorists.