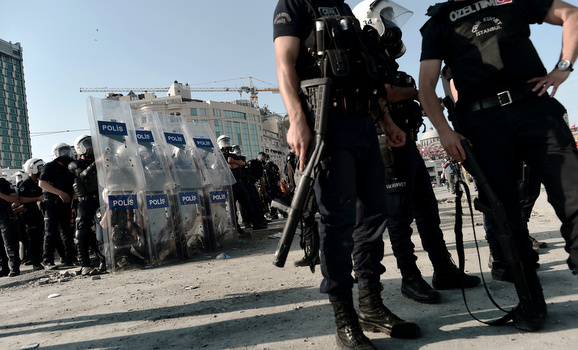 Turkish authorities have suspended 12,801 police officers from duty, police headquarters said today, over their suspected links with U.S.-based cleric Fethullah Gulen and his network, blamed by Ankara for orchestrating a failed coup in July.

The move came after the Interior Ministry launched an investigation into the police force, broadcaster CNN Turk reported, and a day after the Turkish government extended a state of emergency for another three months.

Of the total number of police suspended across the country, 2,523 were police chiefs, the statement said. Turkey’s total police force numbers about 250,000.

About 100,000 people in the military, civil service, police and judiciary have already been sacked or suspended in a post-coup crackdown, and some 32,000 people have been arrested for their alleged role in the abortive putsch.

President Tayyip Erdogan said last week Turkey would benefit from an extension to the three-month state of emergency declared after the failed July 15 coup, saying more time was needed to hunt down those responsible. He suggested it may last for more than a year.

However, the crackdown has raised concerns from rights groups and Western allies who fear Erdogan is using the failed coup as a pretext to curtail all dissent and to intensify his actions against suspected Kurdish militant sympathisers.

Turkey wants the United States to extradite Gulen and prosecute him on charges that he masterminded the attempt to overthrow the government. Gulen, who has lived in self-imposed exile in Pennsylvania since 1999, denies any involvement.