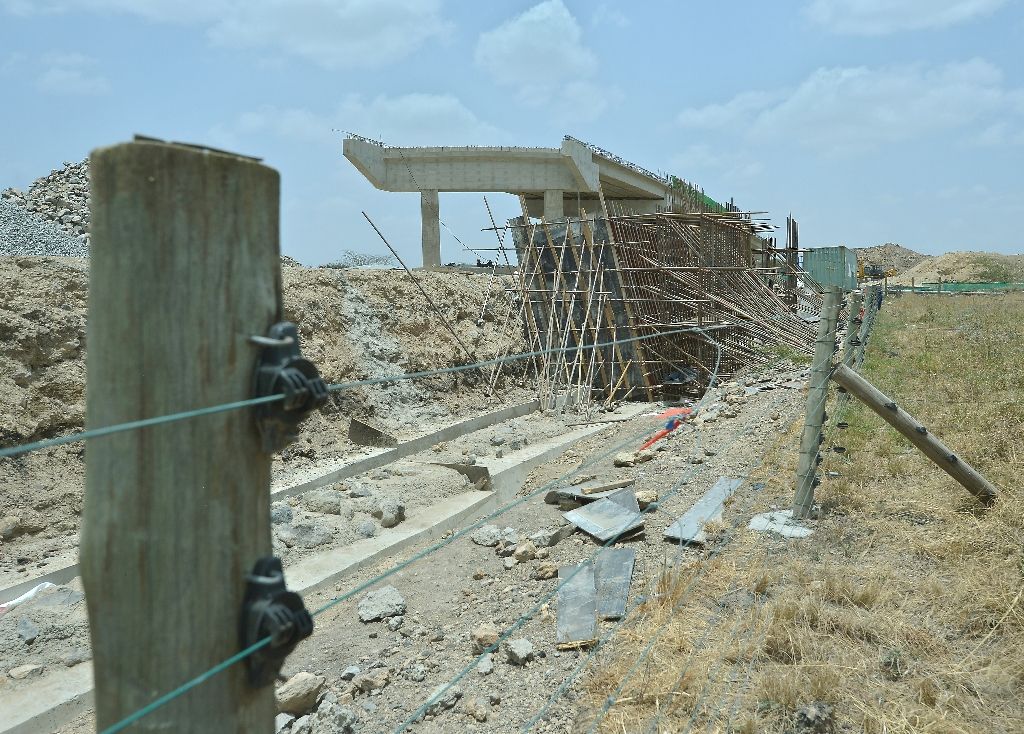 Munching, the giraffe looks up towards the skyscrapers looming in the distance.

But this picture-postcard image of Nairobi, one where wild animals graze in the shadow of the cityscape, is at risk from a railroad.

A unique urban conservation site, the Nairobi National Park is a vast wildlife reserve where lions, hyenas and giraffes roam at will just seven kilometres (four miles) from the heart of town.

But its singular setting could prove its undoing. Nairobi, one of Africa’s fastest growing and economically advanced cities, is planning to build a Chinese-funded railway line across east Africa’s oldest national park.

Urban projects have steadily nibbled away the edges of the 120-square-kilometre (45 square miles) reserve, with new roads laid, power lines strung across its southeast corner, a pipeline dug underground and clouds of dust blowing in from nearby cement plants.

“In the 70s and 80s about 30,000 wildebeest came to the park every year. Nowadays, only about 300 come back regularly,” said Sidney Kamanzi, who heads the Friends of Nairobi National Park group.

The latest threat to the park is part of a gigantic rail project — currently at the heart of a legal battle — which critics claim could do untold harm to the cityside sanctuary that is also home to zebras, crocodiles, hippos, rhinos, antelopes, buffaloes and hundreds of bird species.

Under the scheme, an elevated rail line will run across six kilometres of the park perched on pillars between eight and 40 metres (24 to 120 feet) tall.

“Chunks of the park have been taken away little by little, but there has never been anything like what they propose now,” Kamanza said.

“The consequences will be disastrous,” he said, although other conservationists are demanding an environmental impact study before passing final judgement.

Kenya, which sees itself as east Africa’s economic heart, decided in 2013 to upgrade its national railway network to link traffic from the region’s leading port, Mombasa, to Nairobi, and then on to regional neighbours Uganda, Rwanda and South Sudan.

A first 483-kilometre (300-mile) section from Mombasa to a terminal east of the Nairobi National Park is to be completed in late 2017. The line is said to be Kenya’s largest infrastructure project since independence.

But it is the second stage section linking Nairobi to Naivasha in the Rift valley, around 100 kilometres (60 miles) northwest of the capital, that is seen as most problematic to the park and its 150,000 yearly visitors.

To avoid the high cost of buying land near the reserve, the authorities decided on one of seven possible options — to cut through the sanctuary despite loud objections by some environmental groups.

‘The right thing for Kenya’: Leakey

Initially opposed to the idea, the state-run Kenya Wildlife Service has finally come out in favour, with KWS chairman, world-renowned anthropologist Richard Leakey, saying the costs of skirting the park would have been way too high.

“My personal choice was that the park and the railway should be separate. However, the cost of going round and the implications to our economy and the taxpayer made no sense and we are trying to do the right thing for Kenya,” Leakey said.

Kenya Railways hopes to begin work on the elevated track in January. It would last 18 months and be organised in three stages to avoid having to completely cut off half of the park during construction.

Pillars will be camouflaged, noise pollution reduced and freedom of movement maintained for the animals, the rail authorities have said.

But angry sceptics have taken the case to the country’s environmental court on the grounds there was no impact study. The court has ordered the suspension of the stage two works pending a decision.

“We don’t want this affair to turn into an issue pitting economic development against conservation, because the two can co-exist,” she added.

But other activists are worried the railway could spell the end of the iconic site.

“If the railway (line) is authorised, it could create a precedent that could mean the death of the park,” said Sidney Quntai, who heads the Kenyan Coalition for the Conservation and Management of Fauna.

“Today it’s a bridge (elevated track), but what will it be tomorrow?”