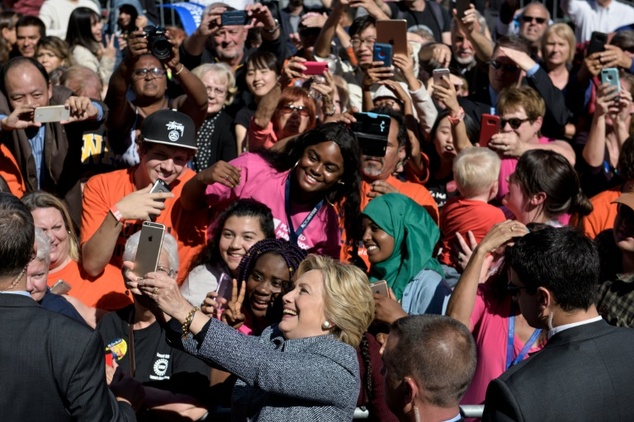 Hillary Clinton campaigned Thursday in Iowa as early voting began in the pivotal swing state, seeking to pry it away from Republican Donald Trump and spur turnout that could ultimately decide the presidency.

The businessman-turned-populist stumped in Iowa a day earlier, appealing to white, blue-collar workers who have helped push him into the lead in the Hawkeye State, where the latest polls put him up nearly five points.

Iowa has long been an essential staging post on the path to the White House.

Barack Obama’s primary win in Iowa in 2008 propelled him to a thumping presidential victory that year and in 2012 that all but secured his re-election.

But Clinton has seen a decade-long Democratic advantage reversed, and it now appears like one of the toughest of seven swing states for the former secretary of state to win.

Her trip here coincides with the launch Thursday of non-postal early voting, which both campaigns see as a potentially critical opportunity for voters to cast ballots in person over the next several weeks.

“We are starting to vote in Iowa today,” Clinton told a 2,000-strong rally in Des Moines that at times struggled to drown out a small but voluble gaggle of Trump protestors.

“We have 40 days to win an election that is going to affect the next 40 years of our country.

“You, every one of you, can make the difference in this election,” she said hitting Trump for bilking contracts in a message the campaign hopes will resonate with Iowans famed for their messianic fairness.

Locking down as many as half of all votes now could help the campaign tailor time and resources as the election enters the final stretch.

But more vital for Clinton will be to ensure that chunks of the electorate actually turn out to vote and reverse Trump’s lead.

Trump is most likely to win if the coalition of young, African American and Latino voters who voted for Obama decide to stay at home on November 8.

Clinton’s main tool to inoculate against that possibility is likely to be Trump himself.

Her campaign has framed the election as an existential moment for the republic: a choice between Clinton’s safe pair of hands and the latent authoritarianism of an erratic and duplicitous mogul.

Clinton hammered away at Trump’s propensity to stretch the truth, as her camp released a video highlighting several moments during the pair’s first debate when Clinton pointed to past Trump statements, only for him to insist he never made them despite clear evidence.

The Clinton campaign also pointed to revelations about Trump’s business ties with Cuba, despite a US embargo, as evidence of Trump’s aversion to the truth.

“Trump will always put his own business interest ahead of the national interest — and has no trouble lying about it,” said senior Clinton campaign official Jake Sullivan.

After a day on the back foot, Trump resumed his attacks on his rival during a stopover in Council Bluffs, Iowa, painting her as a pawn of special interests.

“I am an outsider fighting for you. We’re fighting together.”

He also alluded to Iowa’s early voting, and called on his supporters to demand that they and their friends “get out of bed” to go vote.

“You have no choice. You have to campaign on the streets, spread the love that we have in this room,” Trump said.

“We have to get out there folks, otherwise this movement will be wonderful to read about someday.”

The brash billionaire was due to hold a rally later Thursday in New Hampshire, crisscrossing with Clinton who campaigned in the small but crucial state Wednesday.

After a pneumonia-induced break that was tough for her campaign, Clinton was back on the trail, brimming with renewed confidence after experts widely declared her the winner of her showdown with Trump.

On Wednesday, she appeared with one-time Democratic rival Bernie Sanders, whose improbable journey from low-profile socialist senator to serious presidential contender was made possible by enthusiasm among young voters.

“This election is enormously important for the future of our country,” Sanders, 75, told the New Hampshire rally. “It is imperative that we elect Hillary Clinton as our next president.”

Third-party Libertarian candidate Gary Johnson jumped from 16 percent in August to 29 percent in September — prompting hand-wringing among the Democrats less than six weeks before the election.