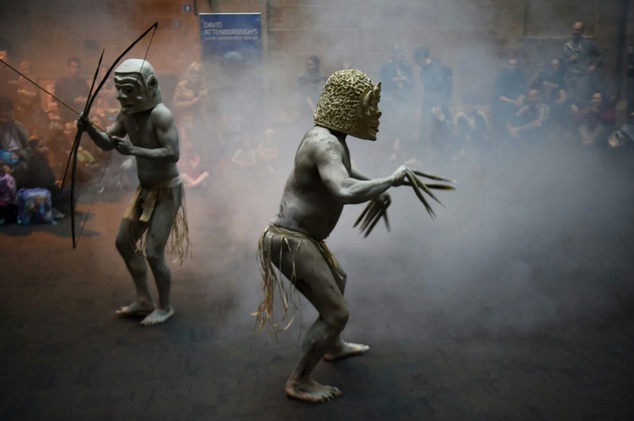 Wearing grotesque masks and with their bodies covered in grey clay, four “Mud Men” from the Asaro Valley in Papua New Guinea’s Eastern Highlands dance slowly in the mist, long bamboo tubes extending from their fingers.

The ghostly dance took place not in their native Komunive village, but at the Australian Museum in Sydney on Thursday.

It was their first sojourn outside PNG to share their passion for crafting the “holosa” mud masks — considered as one of the key cultural traditions of the country’s remote highland region.

The masks have different origin stories from the late 1800s, the museum collections officer Yvonne Carrillo-Huffman told AFP. Some say they stem from the villagers’ desire to intimidate enemies with their macabre appearances.

The masks have evolved to become heavy and thick headdresses that can be worn for only a few minutes as part of brief cultural performances.

The rare appearance of the “Mud Men” outside PNG was part of the museum’s move to acquire several masks for its Pacific collection, Carrillo-Huffman added.

Jim Gahiye, 51, said he had been making the masks for several decades and sculpted up to 70 each year.

“One mask takes me four-and-a-half hours (to make),” he told AFP as he moulded one for the museum’s collection during his week-long visit to Sydney.

“I’m very happy because it’s my first time outside PNG.”