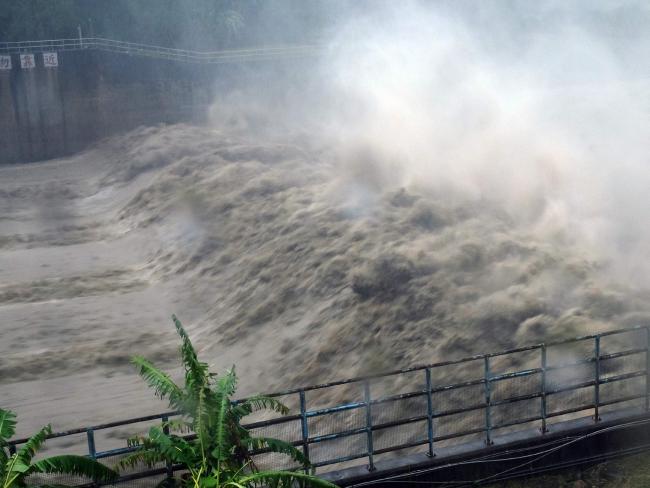 A massive typhoon left one person dead in eastern China today, a day after killing four and injuring 260 in Taiwan.

Typhoon Megi weakened to a tropical storm after hitting the coastal city of Quanzhou in Fujian province before dawn, packing winds of up to 118 kilometers (74 miles) per-hour, China’s National Meteorological Center said.

In Fuzhou, Fujian’s provincial capital, people were shown on state television walking through knee-deep waters that had swamped major roads.

Schools were closed and dozens of flights were canceled.

The storm was forecast to move northwest Wednesday and fade gradually.

In Taiwan on Tuesday, the typhoon’s bands of heavy rain and sustained winds of 162 kilometers (100 miles) per-hour blanketed the island by midafternoon as the eye of the storm made landfall on the east coast.

The 268 injured included eight Japanese tourists traveling in a tour bus that turned on its side in central Taiwan.

Many of the injuries were from falling and wind-blown objects.

Megi was 500 kilometers (310 miles) in diameter, and rainfall had topped 300 millimeters (12 inches) in the south and eastern mountains of Taiwan.

More than 8,000 people were evacuated, mostly from mountainous areas at risk of landslides or floods. About 2,800 went to shelters, Chen said.

The weather delayed more than 121 flights and forced the cancellation of 253 more at Taiwan’s Taoyuan International Airport, while another seven were diverted to other Taiwanese airports. Authorities had closed schools, offices and most of Taiwan’s railway system.

Megi is the fourth typhoon of the year to hit Taiwan and third in the last two weeks.

On the Chinese coast, about 160 kilometers (100 miles) from Taiwan at its nearest point, fishing boats were ordered back to port, China’s official Xinhua News Agency said.