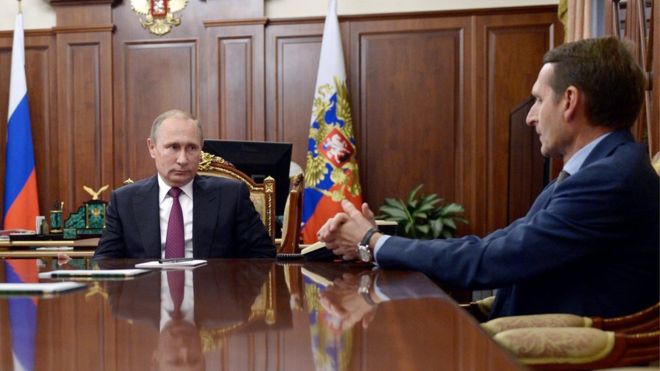 The speaker of the lower house of the Russian parliament, or Duma, Sergey Naryshkin, will become the new chief of the country’s Foreign Intelligence Service (SVR).

He was offered the position on Thursday during a meeting with Russian President Vladimir Putin.

“You fully understand, as we do, the situation we are currently facing, how important is the success of that service for the development of the country,” Putin told Naryshkin.

The president said that the SVR was playing a key part in “neutralizing threats” that can emerge with regard to Russia.

He also urged Naryshkin to further “develop contacts with our partners in major areas, countering terrorism in the first place.”

Naryshkin’s appointment as the speaker of the Duma expires in October following September’s elections of a new parliament in Russia. He is then expected to start his service as the head of SVR in the middle of October, according to the press secretary.

Naryshkin has served as Duma speaker since December 2011 and prior to that was the chief of the presidential administration for over three years. He also served as the head of the government office from 2004 to 2007.

The SVR is Russia’s main service for conducting foreign surveillance. It was founded in 1991, following the break-up of the Soviet Union, and it assumed the functions of the former Soviet Central Intelligence. Among other responsibilities, the SVR is tasked with providing intelligence to the Russian president and government, as well as to both parliamentary chambers.