Home » Science and technology » ESA: A lot will depend on the results of the first ExoMars mission 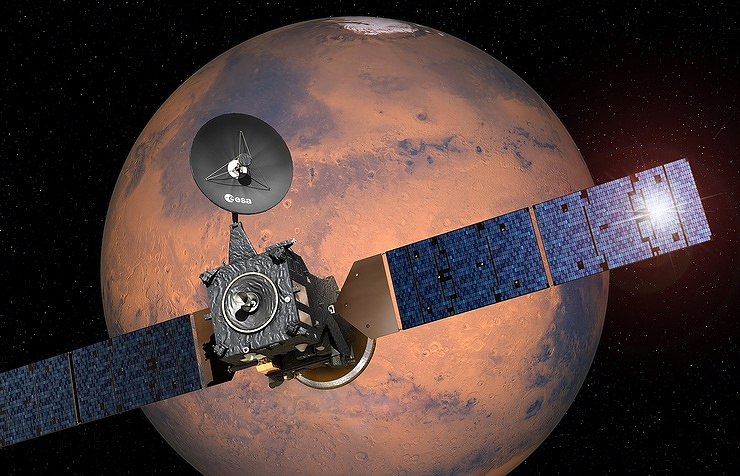 ESA: A lot will depend on the results of the first ExoMars mission

The European Space Agency (ESA) will consider proposals for the financing of the ExoMars project and ESA-Russia joint program of Moon exploration at a ministerial conference before the end of the year, Rene Pichel, head of the ESA permanent mission in Russia said in an interview with TASS.

According to him, at the meeting a political decision to extend the work of the International Space Station (ISS) until 2024 may be made.

“We hope that all mentioned aspects will be approved. Of course a lot will depend on the results of the first ExoMars mission, which is to arrive to the Red planet and to start operating there by the time the conference is held,” he said.

The mission of the Russian-European project ExoMars was launched from the Baikonur space site in Kazakhstan on March 14. Its journey to Mars will last seven months. The mission includes two space vehicles – Trace Gas Orbiter (TGO) and the Schiaparelli lander. They will reach Mars in October.

The second stage of the project envisages sending a Russian landing platform and the EU’s rover to Mars.

Earlier, the US, Russia, Canada and Japan declared their intention to extend the ISS operation until 2024. ESA continues to discuss this issue as part of the preparation of its long-term budget. It is expected that a relevant decision will be made at the conference agency in Lucerne, Switzerland in December.

The current Federal Space Program until 2025 envisages the launch of the Luna-Glob moon lander in 2019, the Luna-Resource orbiter in 2020 and two landers in 2021, as well as the Luna-Grunt lander in 2024. ESA is also expected to take part in those projects.

Launches of Sentinel satellites postponed until 2017

The launch of European satellites Sentinel 5P and Sentinel 2B, that were scheduled for this year, have been postponed until 2017, Rene Pichel, head of the ESA permanent mission in Russia said in an interview with TASS.

“The launch of Sentinel 5P has been shifted from December of the current year to the next year. And the launch of the second European remote probe satellite (Sentinel 2B), which is to be brought to the orbit by the Rokot rocket has also been shifted for a later date. We are told that after those two launched the Rokot program will be closed,” Pichel said.

The previous satellite of the series – Sentinel-1B was launched by Russia’s carrier rocket Soyuz-ST-B from a launch pad at the French Guiana Space Center on April 26.

The Rokot rocket with Sentinel-3A satellite was launched on February 16, 2016 from the Plesetsk spaceport (Arkhangelsk region in the northwest of Russia).

Satellites Sentinel 5P and Sentinel 2B will become alternate vehicles of the environmental monitoring program Copernicus implemented by ESA. Their task is to provide data for operational monitoring of oceans, including information on the extent of oil spills, marine glaciers, as well as to monitor sea traffic areas.

In total, ESA’s Copernicus project plans seven missions and during every mission certain research tools will be brought into orbit. It is planned that these seven missions will cover the whole range of scientific observations of Earth.

According to Rene Pichel ESA will stop using Ariane-5 rockets after the creation of a new carrier – Ariane-6 is completed.

“Ariane-6 is just being developed to replace Ariane-5. It is too expensive to use both of them, moreover, we borrowed a lot from Ariane-5 when designing the new rocket. Besides, it will be easier to adjust Ariane-6 to requirements of customers,” he said.

He added that it is not ruled out that for a while both carrier rockets will be used.

France initiated the work on the family of Ariane rockets in the 1970s.

The fifth generation of these carriers belongs to the heavy class and makes it possible to bring into orbit pay load up to 10.5 tonnes.

Since 1996, 87 launches of those rockets have been conducted from the Kourou spaceport in French Guiana and 83 of them were successful.

Despite the commercial success of the program, the European Space Agency (ESA) has long been concerned about the high cost of production of Ariane 5. Because of high costs the rocket may soon lose its competitive advantage.

At a ministerial meeting in November 2012 ESA decided to allocate 157 million euros for the elaboration of the project of a new rocket that would replace Ariane 5 and Russia’s Soyuz rockets.

The fundamental decision on the transition to a new generation of Ariane rockets was adopted in 2014 at the ESA ministerial meeting.

It is planned that Ariane-6 will be significantly cheaper than its predecessor, which will enable ESA to enhance their competitiveness on the international market of commercial launches of satellites. According to current plans, the first launch of the new missile is to be take place in 2020.