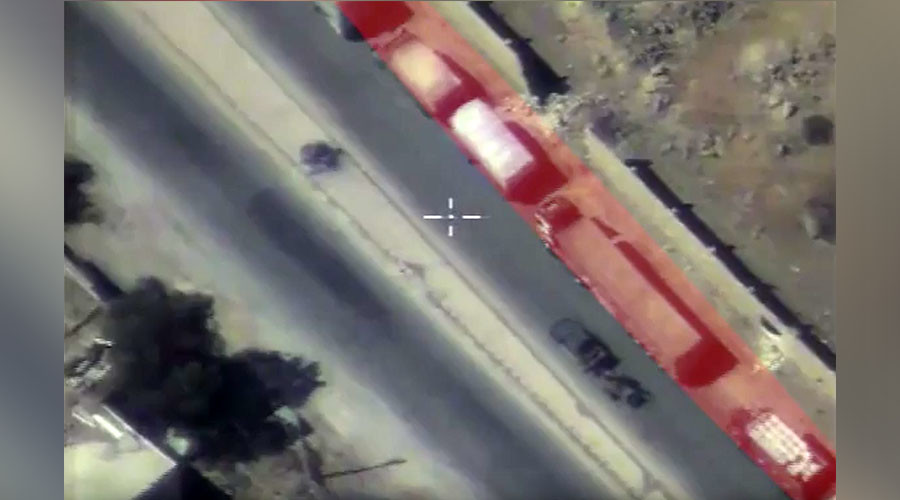 Militants driving a pickup with a mortar sought cover behind the UN-led aid convoy that was destroyed near Aleppo, the Russian military has said, releasing a video from one of its monitoring drones in Syria.

The convoy with humanitarian aid heading to the embattled city of Aleppo can be seen being accompanied by a militant pickup truck, Defense Ministry spokesman Igor Konashenkov has said.

The convoy with humanitarian aid heading to the embattled city of Aleppo can be seen being accompanied by a militant pickup truck, Defense Ministry spokesman Igor Konashenkov has said.

“Analysis of the yesterday’s drone footage monitoring the movement of the aid convoy through the militant held areas helped to reveal new details,” Konashenkov said. He added that the drone footage points at insurgents seeking cover behind the trucks.

“The video clearly shows how the terrorists are relocating a pickup truck with a large-caliber mortar.”

The footage shows the pickup in question riding alongside a line of aid trucks, and stopping right next to one of them, so it can be seen from one side only.

On Monday a humanitarian convoy consisting of 31 trucks was attacked while heading to Aleppo. According to the Red Cross, 20 civilians and one aid worker died as a result. Initial reports by the organization claimed the convoy had been targeted by an airstrike.

Russia denied the allegations, citing the destruction levels of the affected vehicles.

“There are no craters, while the vehicles have their chassis intact and they have not been severely damaged, which would have been the case from an airstrike,” Konashenkov said.

On Tuesday, the UN also retreated from its claims that the convoy was hit by military planes.