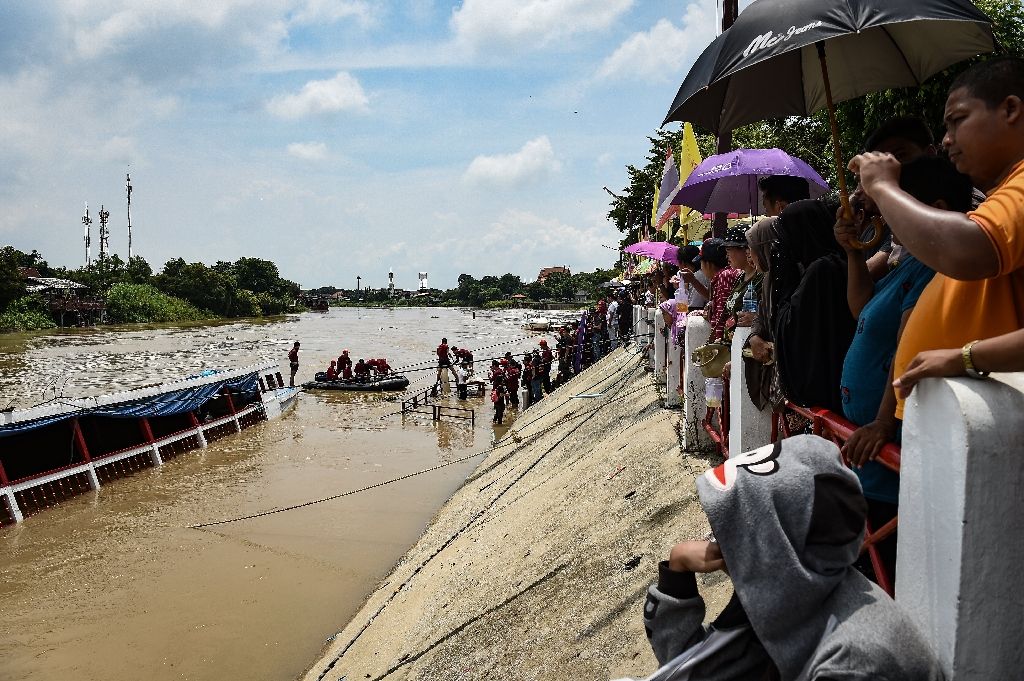 Thais search for missing as 18 die in pilgrim boat accident

The accident happened on Sunday afternoon near the ancient city of Ayutthaya, a popular tourist attraction, when a boat packed with pilgrims returning from a mosque hit a concrete bank in strong currents.

Scores of people lined the bank Monday as divers plunged into the swollen, brown waters for the grim task of searching the partially-submerged pleasure boat for the missing.

Distraught relatives wept as the body of an eight-year-old boy was pulled from the wreckage and laid in a white plastic sheet, an AFP team on site reported.

The boy was later followed by the corpse of a woman who had been found downstream and was brought to shore on the back of a jet ski.

Rescuers used a white board to keep track of those still missing including six children.

Ayutthaya deputy governor Rewat Prasong later said the confirmed death toll stood at 18 with 12 missing and 14 hospitalised. The dead were not thought to include any foreigners.

The boat’s captain is in custody and faces a negligence charge after allowing the double-decked vessel to become overcrowded, police told AFP.

“The boat has permission to carry about 50 people but it was carrying more than 100 people,” said Ayutthaya police chief Sudhi Puengpikul.

Disaster struck as the boat returned from a memorial for a Muslim scholar at an Ayutthaya mosque.

Television footage showed the boat stopping abruptly as it appeared to hit the concrete bank, and sinking in seconds.

Thai broadcasters showed desperate scenes of the aftermath of the accident as passengers were pulled from the water while rescuers attempted to resuscitate stricken people.

Many of the dead were trapped on the lower deck of the boat, which ran into trouble agonisingly close to safety.

Officials said its proximity to the bank may have prevented the toll from being even higher.

Despite its wealth compared to regional neighbours and huge tourism sector, accidents are common on Thailand’s public transport network.

Safety regulations are often weakly enforced, including on boats, with overcrowding, sinkings and crashes common — particularly in busy tourist areas.

According to the World Health Organization, Thailand has the world’s second highest road fatality rate after Libya.

The Thai junta has got tough on breaches of many laws, but has so far failed to fix the chronic safety lapses in the country’s transport system.

The Chao Phraya, the main river that flows through Bangkok, is a key commuting artery, filled with often packed boats plying the waterways at breakneck speed.

It runs through Ayutthaya, the ancient Thai capital whose riverside is studded with the remains of Buddhist temples.

Thailand’s reputation as the “Land of Smiles” has suffered in recent years amid accidents, crimes against foreigners and political unrest.

A record high of nearly 30 million travelled to the kingdom in 2015, a number boosted by a surge in mainland Chinese tourists, with some 33 million expected this year.

The junta government this week said they expected tourism to account for as much as 17 percent of GDP this year.