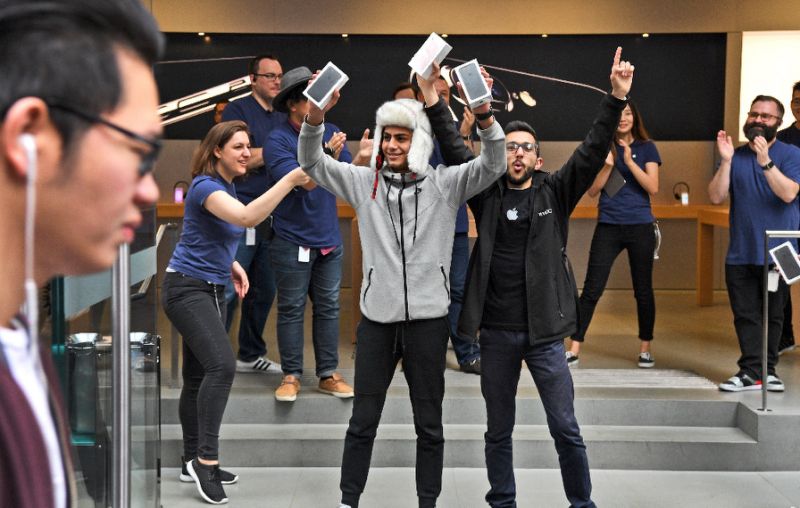 Apple’s iPhone 7 launch generated trademark queues and brisk sales Friday that defied gloomy expectations, with some enthusiasts left empty-handed after lining up for hours as the company announced some models had sold out.

The new phone comes with an improved camera, no headphone jack, and a water resistant body as the US tech giant seeks to reverse declines in sales amid increased competition.

There has been much chatter among Apple fans since the new iPhone 7 and iPhone 7 Plus were unveiled about the groundbreaking decision to eliminate headphone jacks and embrace a wireless future. But on Friday most talk focused on supply issues.

Apple shares finished up 3.4 percent at $115.56 on Thursday as the firm said the iPhone 7 Plus and jet black version of the iPhone 7 had already sold out in pre-orders ahead of its debut in stores.

Analysts were divided over the cause of the shortages, with some saying the handset was more popular than expected, while others suggested the tech titan may be deliberately limiting supply or could be experiencing supply-side problems.

“The fact that all iPhone 7 Plus models are constrained is a sign of the supply chain,” Ben Bajarin, an analyst at Creative Strategies, was quoted as saying by Bloomberg News.

“They’re possibly keeping supply artificially low, or at least lower than demand, so as to avoid having the oversupply of previous years.”

As Asia woke up, consumers in Sydney who had camped out in the rain were among the first in the world to get their hands on the new phones — though others were left bitterly disappointed.

Bishoy Behman, 17, had been sitting outside the Apple store since Wednesday morning but said he and others in the queue found out on Thursday that some models were already sold out.

“I really wouldn’t have lined up if I had known that,” he told AFP. “For them to have not allocated some stock is ridiculous.”

Ahead of Friday’s launch, Apple released a statement saying the two sold-out models would “not be available for walk-in customers”.

“We sincerely appreciate our customers’ patience as we work hard to get the new iPhone into the hands of everyone who wants one as quickly as possible,” it said.

Several local mobile phone operators in Singapore said the shortages were “due to high demand”.

In Tokyo, student Rei Yokoyama, who queued in front of a store since 4 am, was unable to get an iPhone 7 Plus.

“I’d like to try the dual camera on the iPhone 7 Plus, though today it was sold out so I got the iPhone 7,” he told AFP.

The scene at the Apple Store on Tokyo’s upmarket Omotesando high street was festive despite the shortages and occasional light rain, with smiling clerks greeting customers one by one with high fives.

Robert W. Baird senior research analyst Will Power told CNBC Thursday that it appeared the iPhone 7 would be more popular than anticipated.

“There does seem to be an element of under-promising and over-delivering, at least with respect to initial expectations,” he said.

Apple has said it will not provide figures for launch weekend sales as it has in the past.

In mainland China, a key market for Apple, where queues were more subdued than for previous launches since new models are only available on pre-order, scenes were nevertheless energetic as crowds of customers tested out the new handsets.

Apple faces a complicated picture in China, where it ranked only fourth in the Asian giant’s smartphone market in the first half of this year, facing strong competition from low-cost local firms.

In Hong Kong, some customers were seen near the Apple store in the Causeway Bay shopping district, reselling new phones at a profit.

“The demand is not as strong as it was with the last model,” a reseller who declined to give his name told AFP, adding however that there were people looking to buy the rare jet black models.

Candy Leung, 26, who bought a 7 Plus model, seemed unimpressed by the new wireless earphones: “My first impression is that they could be lost really easily.”

The new phones are to hit stores later Friday in markets including France, Germany, Britain and the United States.