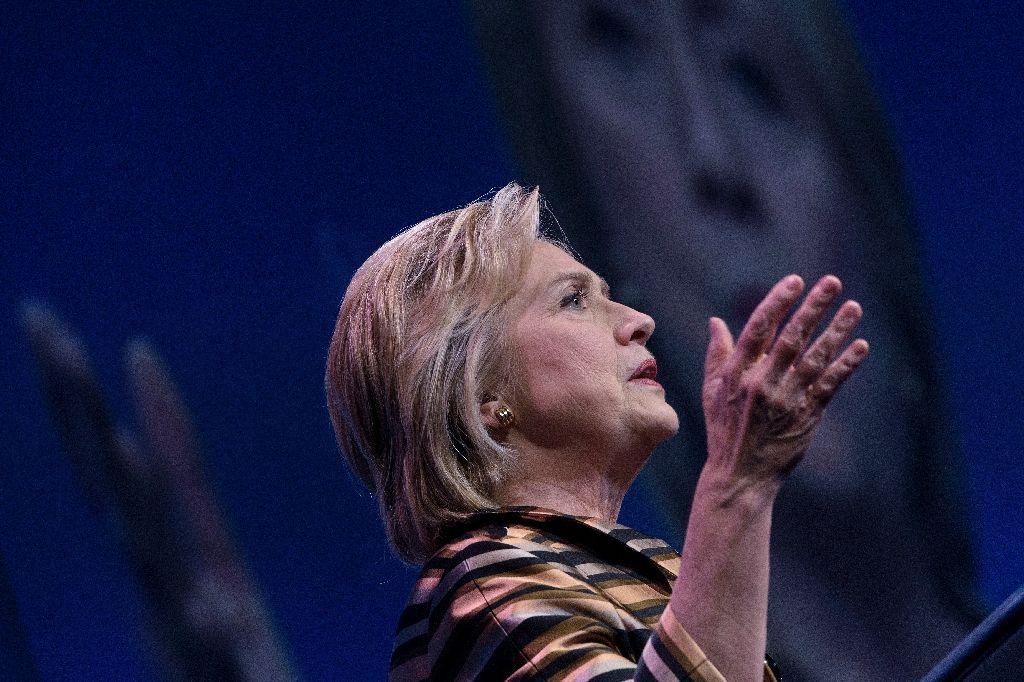 Clinton, back on trail, looks to break Trump momentum

Hillary Clinton returned to the White House campaign trail seeking to regain the momentum lost to Donald Trump, especially in the country’s key battleground states, during her battle with pneumonia.

The former secretary of state, 68, signaled she was raring to go, quickly going on the attack against her Republican rival at a rally in North Carolina and later in Washington at a celebration marking Hispanic Heritage Month.

But Trump didn’t skip a beat, pummeling her economic record and that of President Barack Obama — and releasing new medical records showing the 70-year-old billionaire real estate mogul to be in “excellent physical health.”

The presidential hopefuls are going to pound the pavement in the 10 days to come before their first of three highly anticipated debates on September 26 in New York.

“It’s great to be back on the campaign trail,” Clinton told cheering supporters in Greensboro, North Carolina — a key battleground state.

“With two months to go until election day, sitting at home is the last place I wanted to be,” she added.

She announced stops for next week in states where Trump has started closing the gap, including Florida — a must-win for both candidates.

Her cough was gone, but her voice still seemed scratchy at times.

Clinton fell ill Sunday during a 9/11 memorial ceremony in New York, where she was seen stumbling limp-legged into her vehicle, an episode that raised tough questions about her overall health and her campaign’s transparency.

With the candidates’ wellbeing suddenly at the forefront of the campaign, Clinton looked to head off further scrutiny by releasing new medical records Wednesday indicating that she was “fit to serve” as president.

The disclosure came as the media-savvy Trump, 70, teased new health data of his own during the taping of a nationally televised medical chat show, before publishing it Thursday in full.

The one-page letter from his longtime doctor lists various lab results, including for cholesterol, blood pressure and liver and thyroid function — all deemed to be within the normal range.

While Trump was shown to be slightly overweight, his doctor Harold Bornstein declared the Republican nominee to be “in excellent physical health.”

Clinton appeared to lose her patience with the drama.

“Look at the show he put on with Dr Oz today,” she said in Greensboro.

“I’ll never be the showman my opponent is — and that’s ok with me.”

Trump had made a point of refraining from harsh attacks on his convalescent rival — but the candidates swiftly resumed their jousting with Clinton back in action.

In an address to the Economic Club of New York, Trump slammed the policies of Clinton and Obama as having doubled the national debt and promised his presidency would bring about “an American economic revival.”

There would be “no limit” to American job growth if the government were to slash taxes, remove destructive regulations and unleash the energy sector, he said, warning that the nation would tumble into “dwindling prosperity” and see more people grow dependent on handouts if Clinton were elected.

“The only thing she can ever offer is a welfare check,” he said.

A CBS News/New York Times survey found Clinton had just a two-point edge (46 to 44 percent) over Trump in a two-way matchup among likely voters.

When third party candidates Gary Johnson and Jill Stein were included, the race was tied at 42 percent each.

Trump appears to have flipped the momentum in all-important battleground states as well. A recent Bloomberg poll puts him up by five points in Ohio, while a CNN survey now has Trump ahead of Clinton by three points in Florida.

Also Thursday, the Trump campaign released a statement in which it said Trump now believes Obama was born in the United States. For years Trump has been an outspoken voice in the ‘birther’ movement, which alleged that Obama was born outside the US and thus is not eligible to be president.

“Mr. Trump believes that President Obama was born in the United States,” campaign spokesman Jason Miller said in a statement.

It was released after Trump, in an interview with the Washington Post, refused to say if he now thought Obama was born on US soil.

“I’ll answer that question at the right time,” Trump said. “I just don’t want to answer it yet.”