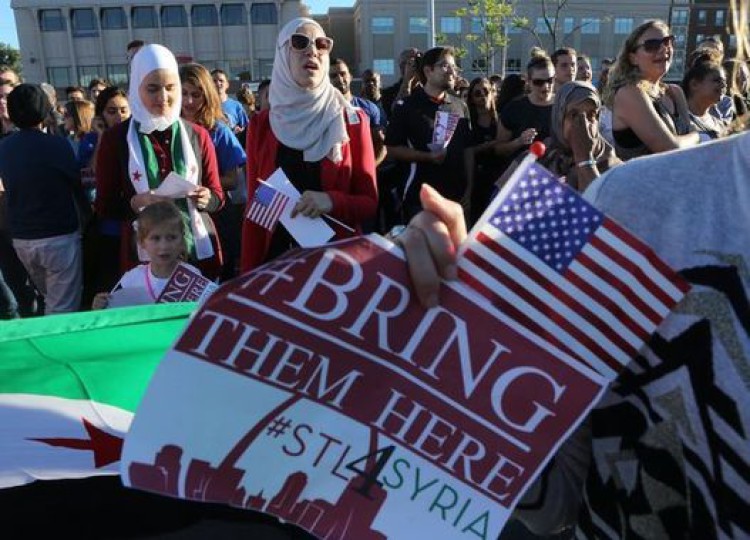 The Obama administration will seek to accept 110,000 refugees from around the world in fiscal 2017, officials announced Wednesday.

Secretary of State John F. Kerry briefed lawmakers Tuesday on the new goal, which is an increase from 85,000 in fiscal 2016 and 70,000 in the previous three years. It represents a 57 percent increase in refugee arrivals since 2015, as ongoing conflicts in Syria, Iraq and elsewhere have spurred an exodus of migrants seeking asylum in Europe, Canada and other regions.

“That does represent a substantial increase in our commitment to addressing the refugee problem around the world,” White House press secretary Josh Earnest said Wednesday, adding the U.S. is the world’s largest humanitarian donor when it comes to refugees. “But I think what we need to see around the world is a greater commitment to not just shunting this burden off to a handful of countries.”

Asked why the U.S. was not admitting more refugees, Earnest noted that the vetting process for these individuals is “not cheap” and that President Obama’s commitment to taking in displaced people was not shared by “a lot of people in Congress, including by a lot of people in the Republican majority in Congress. And that has an impact in terms of the resources that are dedicated to this effort.”

“So I’m sure the president would be willing to consider increasing this commitment further if Congress were prepared to provide the resources necessary to get it done,” he added.

The increase comes even as the question of refugees has emerged as an issue in this year’s presidential campaign. Republican presidential nominee Donald Trump initially called for a halt to Muslims seeking to enter the United States but later modified that stand to say the ban should apply to any applicants coming from a country with a history of terrorism. Democratic presidential nominee Hillary Clinton has called for the United States to accept more refugees from Syria, which has been embroiled in conflict for more than five years.

House Judiciary Committee Chairman Bob Goodlatte (R-Va.) criticized the decision, saying policymakers should focus on reforming the nation’s system for admitting refugees rather than having the White House set goals.

“For generations, the United States has been a safe haven for people fleeing persecution. We must remain compassionate toward refugees but we also need to make sure that we use common sense,” Goodlatte said in a statement. “Unfortunately, President Obama unilaterally increases the number of refugees resettled in the United States each year and gives little thought as to how it will impact local communities. The president also continues to ignore warnings from his own national security officials and plans to bring in even more Syrian refugees over the next year.”

Last year, the administration indicated it planned to admit at least 100,000 refugees in the coming year, but the new target surpasses that goal. President Obama is hosting a summit on refugees next week at the United Nations General Assembly, where the United States and other nations will showcase their efforts to address what has become a global humanitarian crisis.

Bill O’Keefe, Catholic Relief Service’s vice president for advocacy, said in an interview that while his group and others welcomed the administration’s new resettlement pledge, neither that nor the upcoming U.N. summit was sufficient to address the needs of  “the 65 million globally displaced people around the world right now.”

Advocates are looking for greater transparency about how the financial pledges the U.S. and other countries are making “actually end up translating to real food, real education and real shelter for real people.”

The country that sent the most refugees to America in 2015, according to an analysis by the Migration Policy Institute, was Burma, which has a longstanding ethnic conflict and sent 18,386 refugees that year. That figure accounted for more than 26 percent of the total and surpassed Iraq, which sent 12,676 refugees.

O’Keefe noted that procedures established by Congress help account for why Burma has an “outsized” role in admitted refugees, since the formulas for admitting applicants is based in part on what region of the world they are fleeing. But he added,  “Syria, Afghanistan and Iraq are special cases, given our experience and history there, and we should be taking many more people from there.”

Many Republicans, including Trump, have questioned whether terrorists are managing to enter the country through the asylum process. Administration officials say refugees are subject to the most rigorous screening of any traveler to the United States.

A State Department official, who was not authorized to speak on the record, said no specific goal has been set for the number of Syrian refugees who will be admitted. Syrian refugees are expected to be admitted at a “robust level,” the official said, though not as many as in recent months.

The primary goal, however, is to provide aid and protection to refugees in the countries and areas where they have fled, “so refugees can return home when the conflict ends,” the official added. Since the conflict began five years ago, the United States has donated $5.6 billion in humanitarian aid to the region, both in direct aid to refugees and to the countries where they have sought safe haven, as well as inside the borders of Syria.

The administration has launched a new effort to reach a political solution to the Syrian conflict by brokering a still-fragile cease-fire with Russia that took effect Monday.

Carol Morello and David Nakamura contributed to this report.