Home » Press » Is Will and Kate’s Canadian tour a celebrity appearance like any other? 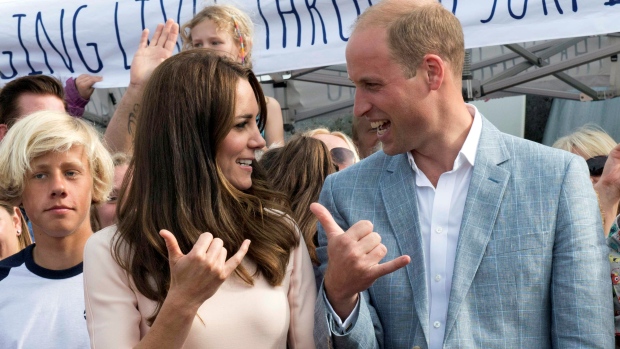 Is Will and Kate’s Canadian tour a celebrity appearance like any other?

Many Canadian royal watchers were thrilled to hear that Prince William and Kate will bring their children, Prince George and Princess Charlotte, on their visit to B.C. and Yukon later this month.

The hype surrounding the royal tour and the speculation, ahead of Monday’s announcement, around whether the Duke and Duchess of Cambridge will or won’t bring the kids is reminiscent of the buzz that follows any famous family in our celebrity-obsessed culture, which raises the question: Is a royal tour really any different from a visit by Beyoncé, Jay Z and Blue Ivy or Kimye and the kids?

“The most obvious difference is the royals aren’t selling anything,” said Catto.

Although some would argue that it’s the monarchy itself that they are selling, the fact is that actors and musicians, on the other hand, are usually promoting something material, such as their latest album or film.

“I’m sure people will make money off the royal tour, but it’s not going to be William and Kate,” Catto said.

The purpose of royal visits is fundamentally different from that of a celebrity appearance, said Carolyn Harris, a royal historian and author based in Toronto.

“They’re very closely involved with Canadian institutions, whether it’s engaging with the Armed Forces or First Nations or with philanthropic initiatives,” Harris said.

Members of the Royal Family often promote causes that are of importance throughout the Commonwealth, such as environmental issues.

For example, she said, during William and Kate’s last visit to Canada in 2011, as newlyweds, they joined in Canada Day celebrations but then made an unscheduled stop in Slave Lake, Alta., which had been plagued by wildfires.

Although there have been times, including during the ugly breakdown of Prince Charles and Princess Diana’s marriage in the 1990s, when cynicism about the monarchy ran deep, both Catto and Harris say William and Kate have played a significant role in reviving interest in the Royal Family, especially among younger people.

Although Kate comes from a wealthy family, she doesn’t come from a royal background. But, much like a celebrity, she has made a mark with her sense of style, they said.

Kate’s “style savvy” is “much discussed among young fashion watchers, and she is trendsetting,” Catto said.

“Even if you don’t think you’re … a royal watcher or a royal fan, you’re going to see things that are modelled on what Kate wore showing up in your local store.”

William and Kate are seen as a royal couple whom people can identify with, both Harris and Catto said.

“They seem to have a lot of fun together. There’s almost this palpable affection and humour that seems very natural,” Catto said. “They’ll get out there and compete in a sport against each other and seem to get a kick out of just being together.

“I think that … brings a certain informality that people find very appealing… it’s kind of fun.”

“There’s always been a strong fascination with royal parents, as parenting is an experience that people of all social backgrounds can relate to,” she said.

In fact, the way their children areintegrated into the itinerary is notable on the upcoming tour, Harris and Catto said, because there are events, such as a kids’ party with military families in Victoria, aimed at actively involving George and Charlotte.

“By now, we’ve seen William and Kate a lot of times, but we have not seen the children a lot of times. We have barely seen them together in any meaningful way or interacting,” Catto said.

Their presence might even win over Canadians who don’t particularly care about the royal visit, she added.

“People who might even have told themselves, ‘Oh, I’m not that interested’ or ‘I already know what the royals are up to’ will be interested when there are these … adorable new photos of these children,” she said.