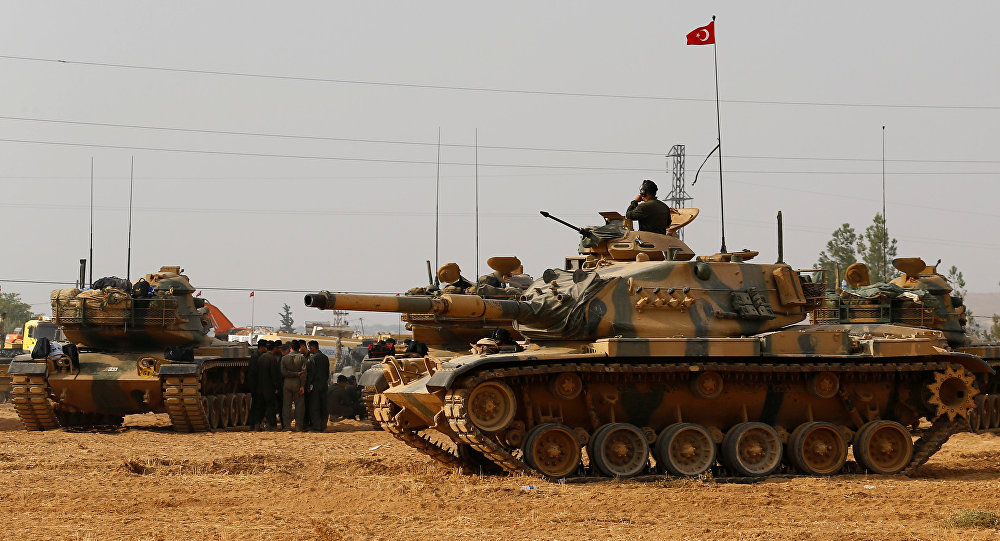 Turkey’s ongoing Operation Euphrates Shield was supposed to help tackle Daesh in the border regions, but has instead been mostly focused on the Kurds will “hardly have a positive effect” on the political and security situation in Syria, analyst Timur Dzhukaev wrote for the Vzglyad.

The Turkish military liberated the Syrian town of Jarablus on August 24, the same day the campaign was launched. In the two and a half weeks since then, the offensive has expanded to other areas along the border and deeper in to Syrian territory. Ankara-led forces, including the Free Syrian Army are now trying to fully secure Jarablus, prevent the Kurds from freeing Daesh-held al-Bab and force them out of Manbij.

High-ranking Turkish officials, including Defense Minister Fikri Isik and Foreign Minister Mevlut Cavusoglu, said earlier this week that local fighters should be instrumental in pushing Daesh out of Raqqa, the de facto capital of the terror caliphate. In other words, Turkish leadership does not want Kurdish fighters to spearhead these efforts, although the US has relied heavily on the People’s Protection Units and Syrian Democratic Forces in its anti-Daesh campaign.

In addition, President Recep Tayyip Erdogan has recently said that Turkey was ready to support a US-led operation to free Raqqa.

“In general, freeing Syria from Daesh by using the Turkish military and ‘moderate opposition’ will hardly have a positive effect on the political and security situation in Syria,” the analyst noted. “Syria could possibly return to the ‘aggravated’ state of 2013 when the country was largely controlled by the Free Syrian Army.”

There is a major difference between 2013 and 2016. This time the so-called “moderate opposition” will be backed by the second largest military in NATO and jihadist groups, including al-Nusra Front, an organization that has recently rebranded itself ostensibly in a bid to sever its al-Qaeda roots.  This scenario will most likely be detrimental to the fragile peace process.

“Pro-Turkish armed opposition groups, backed by the Turkish military, will not want to seek common ground. Potentially, Turkish ‘geopolitical appetites’ could stretch further than the border region and Turkmen areas in western Syria,” the analyst observed.

Dzhukaev named Aleppo as the second key point of interest for Turkey.  Syria’s second largest city has been a site of intense fighting involving the Syrian Arab Army (SAA), assisted by Russian warplanes and local allies, and numerous radical groups, including al-Nusra Front and Ahrar al-Sham. In late July, the SAA largely cut off all supply lines to the rebel-held areas of the city.

“In a while Turkey could deploy its forces to Aleppo from al-Bab citing a plausible pretext. For instance they could say that they were chasing fleeing Daesh fighters,” the analyst noted.

Dzhukaev further said that “any region where Syrian Turkmen live could turn into Turkey’s military foothold, particularly taking into account that many of these areas are still controlled by the Free Syrian Army and other pro-Turkish armed opposition groups.”