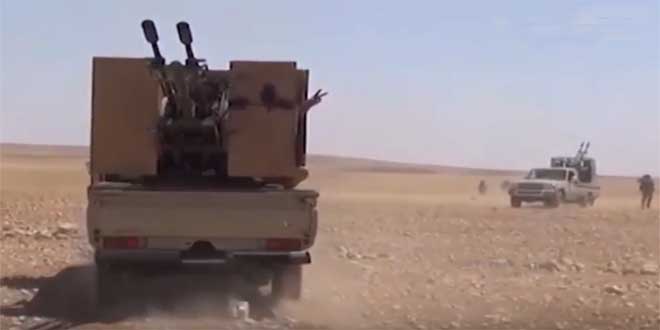 The Syrian army has stepped up operations against terrorist organizations in many provinces, launching intensive air strikes on their positions and bombarding their sites with artillery and other heavy weapons, leaving many terrorists dead and their equipment destroyed.

The army’s air force hit positions for ISIS terrorists to the south of Palmyra, in al-Sukhneh and to the east of Qasr al-Hallabat in Homs countryside, in addition to destroying scores of ISIS tanker trucks between al-Khashabiyeh and al-Fasida areas.

On Thursday evening, an army unit positions of terrorists from Jabhat al-Nusra and Ahrar al-Sham in al-Zaafaraniyeh and al-Saan in the northern countryside of Homs province.

According to SANA reporter, the operations resulted in the death of a number of terrorists, including leaders such as Abu Mohammad al-Homsi from Jabhat al-Nusra.

Army units destroyed two positions for Jaish al-Fatah terrorists and killed a number of them, including leaders of foreign nationalities, in Khan Sheikhoun and Taaoum in Idleb southern countryside near the border with Hama.

In the same context, army units expanded their control in al-Rihan farms and in the direction of the factories in Eastern Ghouta.

The Air Force carried out Thursday night and Friday morning intensive sorties targeting movements of ISIS terrorists in al-Jafreh, Hatla, al-Thurda Mountain, al-Bugheiliyeh, to the northwest of Barouk Hill and to the east of the military airport in Deir Ezzor province, leaving many of the terrorists dead and destroying vehicles, some of which armored and other equipped with machine guns.

Meanwhile, the Artillery of the Syrian army targeted ISIS positions in the neighborhoods of al-Huweiqa, al-Rushdiyeh, al-Hamidiyeh, al-Orfi and al-Sinaaa in Deir Ezzor city, killing a number of terrorists and destroying several mortars they used to shell residential neighborhoods.

An army unit targeted two terrorist groups that were carrying out fortification works in al-Bajabjeh neighborhood in Daraa al-Balad area in Daraa city. The terrorist groups’ members were either killed or injured in the operation.

Another army unit targeted terrorists moving between Busra al-Sham and Wadi al-Zaidi, leaving all of them dead or wounded.