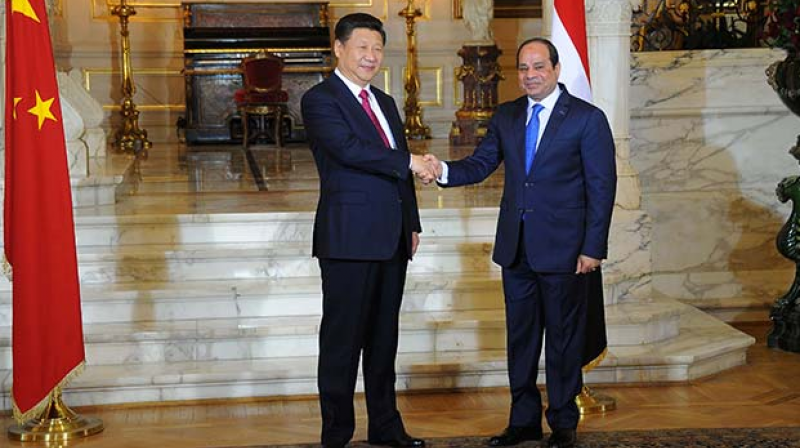 On September 4, 2016, President Xi Jinping met in Hangzhou with President Abdel Fattah al-Sisi of Egypt, who was in China to attend the G20 Summit upon invitation.

Xi Jinping pointed out that in recent years, China and Egypt have conducted frequent high-level exchanges, continuously promoted practical cooperation in various fields, carried out close exchanges in people-to-people and cultural engagement as well as local affairs, and maintained sound communication and coordination in international and regional affairs. China-Egypt comprehensive strategic partnership has continuously been deepened and developed, and China is satisfied with it.

Xi Jinping stressed that China pays high attention to bilateral relationship. We firmly support Egypt to safeguard national stability and independently explore a development path conforming to national conditions. China is willing to continue to share mutual support with Egypt on issues related to each other’s core concerns. Both countries should earnestly implement bilateral economic and trade cooperation, advance the implementation of major cooperation projects at an early date, enhance cooperation in production capacity, finance, livelihood, environmental protection and infrastructure, and intensify coordination and cooperation in international and regional affairs. Both sides should take the 60th anniversary of the establishment of diplomatic relations as a new starting point to constantly push China-Egypt relations for new and greater development.

Abdel Fattah al-Sisi expressed that the traditional friendship between the two countries has deeply rooted in hearts of the two peoples. He thanked President Xi Jinping for inviting him to attend the G20 Hangzhou Summit, which further reflects the high level of Egypt-China relations.

Egypt devotes itself to continuously promoting bilateral relations, so that it can better meet the expectations of the two peoples.

Egypt is willing to enhance communication and cooperation with China in such areas as industry, communication, technology, agriculture, water conservancy, finance, local management and human resource.