Home » Manchet 3 » Trump: I don’t give a specific ISIS plan because I don’t want enemies to know it 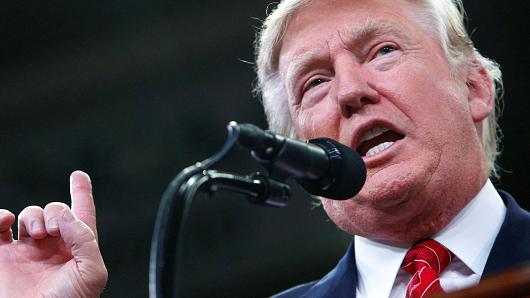 Trump: I don’t give a specific ISIS plan because I don’t want enemies to know it

Donald Trump brushed off his lack of a specific policy to defeat the Islamic State terror group on Wednesday night, claiming he had a plan but did not want to broadcast it to the United States’ enemies.

“I have a substantial chance of winning. If I win, I don’t want to broadcast to the enemy exactly what my plan is,” the Republican nominee said at an NBC-hosted commander-in-chief forum in New York. The gathering was the first time both Trump and his rival Hillary Clinton have shared the same stage in this election, albeit at separate times.

In a military speech this week, Trump said he would ask generals to give him a plan within 30 days to defeat ISIS. Trump said Wednesday he would consider using a combination of his own plan and proposals from the generals to fight the terror group.

Trump has taken a decidedly hawkish tone on terror, once pledging to “bomb the hell” out of ISIS and repeatedly pledging to keep American safe from terror attacks at home. But he has so far given few details about he would do that and seems reluctant to do so. Trump has never held elected office, and questions about his preparation and temperament have trailed him so far in the election.

Trump, when asked about his claim that he knows more than U.S. generals about ISIS, said they had been “reduced to rubble” under President Barack Obama.

“You would leave a certain group behind and you would take various sections where they have the oil,” he said, not specifying if that group would consist of American troops.

During her time, Clinton also addressed ISIS during the event on Wednesday night, calling it her “highest counter-terrorism goal.” Clinton said she wanted to maintain air strikes and support local troops on the ground in their fight.

Clinton declined to say outright that the country would be safer under her administration than when she took office.

After the conclusion of the event on Wednesday, Clinton’s campaign put out this statement: “The difference tonight could not have been more clear. Hillary Clinton showed a firm command of the issues and the qualifications, experience and judgment to be commander in chief.

“In contrast, the nominee of the party of Ronald Reagan just attacked America’s generals and showered praise on Russia’s president. Trump sputtered his way through the forum, making clear his secret ISIS plan is no plan at all, doubling down on the idea that the military should have known better than to have men and women serve together and lying yet again about his early support for the war in Iraq.”

Republican National Committee Chairman Reince Priebus said: “Hillary Clinton is the wrong choice to lead America as commander-in-chief, repeatedly showing poor judgment and failed leadership on critical issues like foreign affairs and the growth of radical Islamic terrorism, and an utter tone deafness on the catastrophe at the VA.

“Americans need a strong leader who will keep our country safe and secure, not a politician who can’t even say she will make the country safer from terrorist threats. And her shocking claim that not a single American has died in Libya ignores the four brave Americans who fell victim to a terrorist attack on her watch.”

Trump and Clinton will square off directly at the first presidential debate on Sept. 26 at Hofstra University.