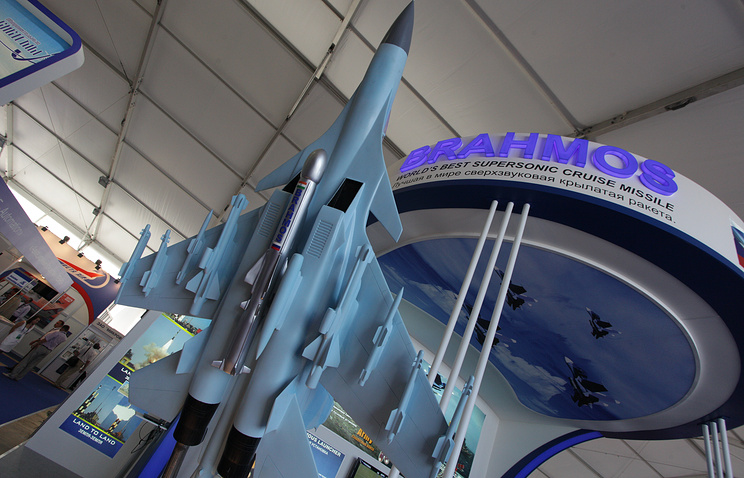 The Russian military are interested in buying the BrahMos cruise missiles, which were developed jointly with India, for equipping its Sukhoi Su-30SM fighters, a military-diplomatic source told TASS today.

“The new missile strike system – a plane plus a missile – will be first of all made operational with the Indian Air Force. After that the Russian Air Force, which is very interested, may buy the system,” the source said at the Army 2016 forum.

He added that the negotiations with the Russian side might begin in 2017 after flights tests of the Indian Su-30MKI fighters with the BrahMos missile are completed.

TASS has no official confirmation of the report.

The Indian Air Force fighter with a demonstrator of the BrahMos missile’s air-launched version performed the first flight in summer 2016. The first aircraft launches of the missile are expected to take place before the year end. India plans to equip three regiments of the Su-30MKI fighters with the updated missiles. The Indian military currently have in service the missile’s ground and sea-launched versions.
The Su-30SM multifunctional fighter is an upgrade the export Su-30MKI version. It was improved in line with the Russian Defense Ministry’s requirements regarding the armaments, radar, communications, IFF transceiver systems and other equipment. The first contracts on the supply of the Su-30SM fighters to the Russian army were concluded in 2012.

The Sukhoi Su-30 (NATO reporting name: Flanker-C) is a twin-engine, two-seat supermaneuverable fighter aircraft developed by Russia’s Sukhoi Aviation Corporation. It is a multirole fighter for all-weather, air-to-air and air-to-surface deep interdiction missions. The Su-30 started out as an internal development project in the Sukhoi Su-27 family by Sukhoi. The design plan was revamped and the name was made official by the Russian Defense Ministry in 1996.

Of the Flanker family, only the Su-27, Su-30, Su-34 and Su-35 have been ordered into serial production by the Defense Ministry. All the others, such as Su-37, were prototypes. The Su-30 has two distinct version branches, manufactured by competing organizations: KnAAPO and the Irkut Corporation, both of which come under the Sukhoi group’s umbrella.