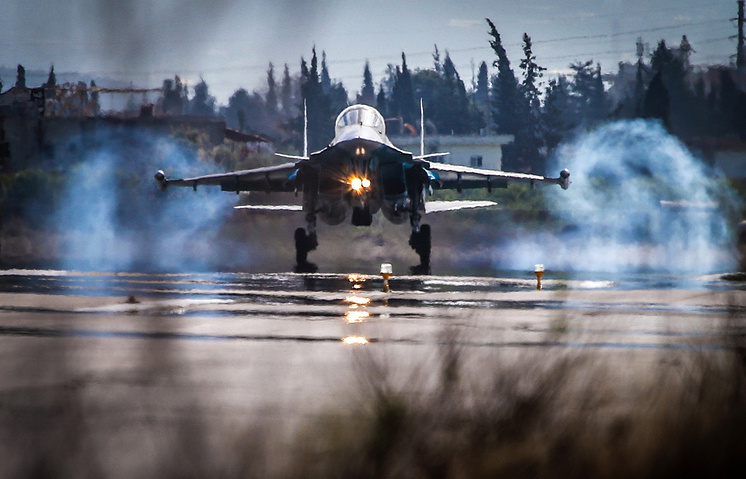 The aircraft features a standard aerodynamic layout with an additional foreplane, a trapezoidal midwing, twin vertical tails, two AL-31F engines in the fuselage’ rear and tricycle landing gear. The crew comprises a pilot and a navigator sitting side by side in an armored cockpit. The cockpit can be accessed through a lower hatch by climbing the footsteps.

Commander of a Su-34 air wing, Captain Alexei Belonog who has logged almost a thousand flight hours and mastered four types of aircraft told TASS on the eve of Military Aviation Day that precisely the Su-34 fighter bomber was an indisputable favorite for him.

And, by the way, it is pure truth that the advanced fighter-bomber is gently called the ‘Duckling’ in the troops due to its flat-shaped nose cone. I don’t see anything bad in thisAlexei Belonogcommander of a Su-34 air wing, captain

The Su-34 is a favorite plane among many pilots as it features a spacious and comfortable cockpit and excellent flight characteristics. “Of course, it is not designed for aerobatics but it can also experience overloads of up to 7.5G [overloads experienced by pilots when they perform aerobatic maneuvers],” the pilot said.

The Su-34 two-seat frontline bomber is capable of operating equally efficiently day and night and in any weather conditions. The Su-34 dubbed as Fullback under NATO classification is designed to deliver missile and bomb strikes against ground objectives and destroy an enemy’s aerial targets.

The Su-34 is a unique machine. It incorporates as many as three planes: a fighter jet, an attack aircraft and a frontline bomber. The Su-34 can successfully fight any aerial objectives and effectively destroy ground and surface targets. Moreover, it can stay endlessly long in the air and this duration can only be limited by pilots’ physical ability

The Su-34, which is a modified version of the Su-27 (Flanker) fighter aircraft, has been developed by the Sukhoi design bureau under the guidance of its chief designer Rollan Martirosov. The fighter bomber has been serial produced at the Novosibirsk-based Aircraft-Making Enterprise since 2006.

The Su-34 performed its debut flight in 1990 (the prototype aircraft T-10V-1 was piloted by USSR honored test pilot Anatoly Ivanov).

The Su-34 was developed for promptly redeploying it for missions from any parts of the country to its border to reliably seal off a possible armed conflict before the arrival of the main forces.

Even before the plane entered service, a crew of test pilots from the Sukhoi design bureau performed a non-stop flight from Moscow to Sakhalin in the Russian Far East and back with aerial refueling, thus proving to all those in doubt that the fighter is capable of accomplishing any missions at the farthest distance from its home airfieldViktor LitovkinTASS military observer

All conditions have been created in the Su-34 for this. As compared to other fighter jets, the crew is accommodated side by side in the cockpit rather than one after the other.

“There is space between them where a matrass can be spread and one of the crewmembers can have a rest during a flight,” the military expert said. Besides, the space behind the pilots’ seats allows them to stand up to their full height.

There is a microwave oven, an air conditioner, an electromassage system built into the pilots’ seats and even a bio toilet aboard the bomber. If you get to know that such arrangement can’t be found aboard not only fighter jets but also long-range bombers and even Ilyushin Il-76 military-transport planes, then you can only be surprised once again at the uniqueness of the Su-34
Viktor LitovkinTASS military observer

The Su-34 is capable of flying in the auto pilot mode at extremely low altitudes, skirting the terrain. In Litovkin’s opinion, none of the fighter jets in the world, including the well-advertised US F-22 and F-35 aircraft, can feature “these capabilities.”

The available second radar for observing the rear hemisphere is also the plane’s unique feature: the system will warn the crew of a threat and can retaliate with a salvo of missiles to an attempt by an enemy’s aircraft “to strike in the back.”