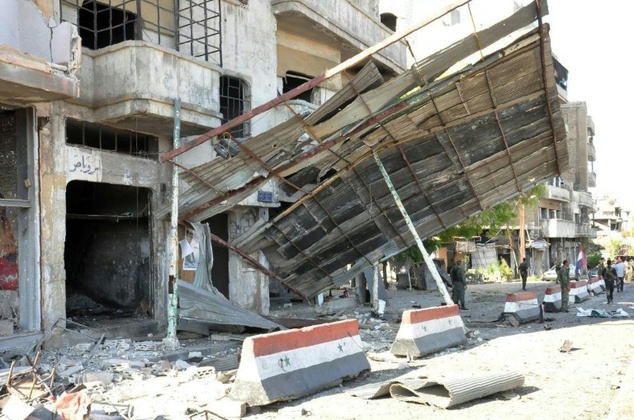 A string of bomb attacks hit across mostly government-controlled areas of Syria on Monday, killing several dozen people including at least 35 in Tartus, state media said. At least 48 people died in the multiple blasts, with dozens also wounded in the double bombing outside of Tartus city.

There were no immediate claims of responsibility for the blasts, but the Islamic State (IS) jihadist group has regularly targeted several of the areas hit today. Other attacks hit government-held Homs city, an army checkpoint on a road outside Damascus, and a Kurdish security forces checkpoint in Hasakah city.

In Tartus, two blasts targeted the Arzuna bridge, “the first a car bomb and the second a suicide bomber who detonated his explosive belt when people gathered to help the wounded”, according to state television.

Quoting the head of Al-Bassel hospital in Tartus, the channel said 35 people had been killed and 43 others wounded in the attack.

Tartus has been largely spared the worst violence of Syria’s conflict since it began with anti-government protests in March 2011. It has become a refuge for many Syrians fleeing the fighting that has displaced over half the country’s population.

In the northeast of the country, at least eight people were killed by a bomber on a bike in the city of Hasakah, which is mostly controlled by Kurdish forces, though the regime is also present.

Hasakah city has been regularly targeted by IS, including in July when a motorcycle bomber killed at least 16 people outside a bakery in the city.

The IS-linked Amaq news agency reported the blast in Hasakah, but did not carry any immediate claim of responsibility.

Today’s bombings came after advances by Turkish forces and allied Syrian rebels expelled IS from the last stretch of the Syrian-Turkish border under their control.

The jihadist group has been losing ground to both an alliance of Kurdish and Arab fighters known as the Syrian Democratic Forces and, more recently, a Turkish offensive involving rebels loyal to Ankara.

In central Homs city, state media said at least four people were killed in a car bomb at the entrance to Al-Zahraa neighbourhood, whose residents mostly belong to the same Alawite sect as Assad.

Al-Zahraa has also been regularly targeted in bomb attacks, including a devastating double bomb blast in February that killed 57 people and was claimed by IS.

State television broadcast images from the aftermath of the blast in Homs, showing rubble strewn on the streets and smoke rising from the charred remains of vehicles.

Another bomb attack was also reported on Al-Sabura road west of the capital Damascus, with state media saying one person had been killed and three wounded in that bombing. The Observatory said that attack targeted a checkpoint and gave a toll of three dead.

Observatory director Rami Abdel Rahman said the dead in both the Homs and Al-Sabura road attacks were government security forces manning checkpoints. He said the blasts appeared to be coordinated.

“Clearly these attacks were simultaneous and they all targeted security posts,” he told AFP.

More than 290,000 people have been killed in Syria since its conflict erupted in March 2011, and millions displaced by the fighting.

Successive rounds of international negotiations aimed at find a political solution have failed to bear fruit, though US Secretary of State John Kerry and his Russian counterpart Sergei Lavrov are due to resume talks on stemming the violence today.

Syrian news agency SANA reported that “eleven civilians were killed and 45 others were injured in twin terrorist bombings in Tartous countryside today”.

A source at Tartous Police Command told SANA that twin terrorist bombings took place near Arazona Bridge on the international highway in Tartous countryside, claiming the lives of 11 civilians and injuring 45 others.

Five civilians were killed and two others were injured in a terrorist bombing by an explosives-packed motorcycle north of Hasaka city on Monday morning.

A security source told SANA reporter that the terrorist bombing occurred when an explosives-packed motorcycle blew up at Marsho roundabout north of Hasaka city.

The terrorist bombing, according to the source, claimed the lives of 5 civilians and injured two other persons as it caused material damage to the private and public properties.

Two civilians were killed and seven others were injured in a terrorist car bomb explosion hit the entrance of Bab Tadmur neighborhood in Homs City on Monday.

Director of Homs Health Directorate Hassan al-Jindi told SANA reporter that the bodies of two killed people and the injured persons were transported to hospitals affiliated to the Directorate.

SANA reporter said that the terrorist bombing caused a material damage to the neighboring houses and a number of cars were burnt.