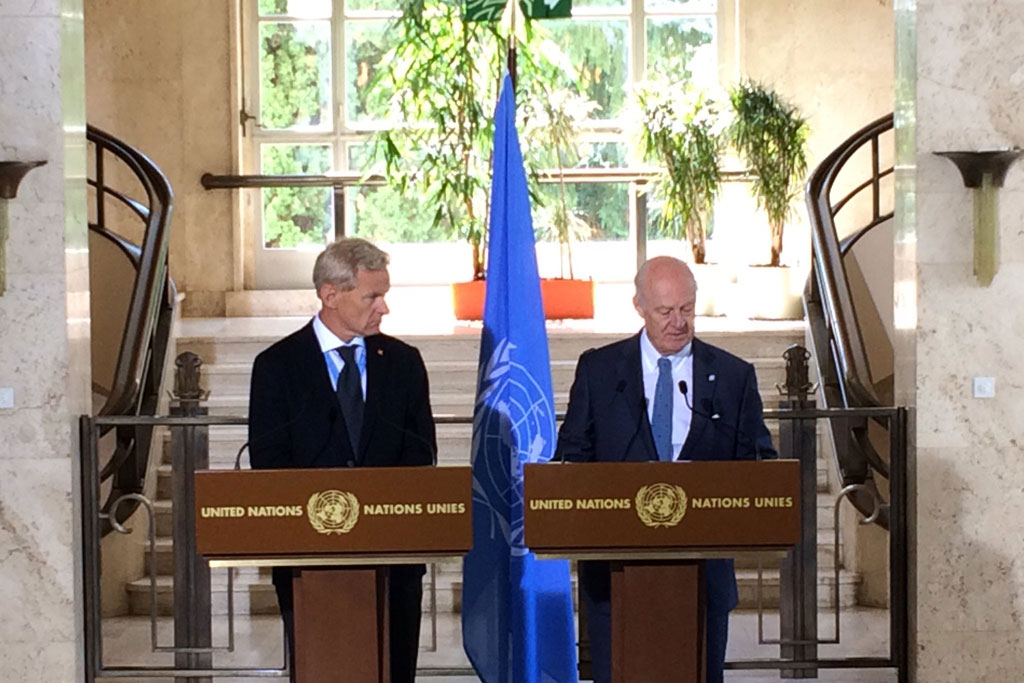 The United Nations envoy for Syria said today that he plans to present a “quite clear political initiative” during the week preceding the General Assembly so that the stalled peace talks could resume by the time the Security Council holds another meeting on Syria on 21 September.

“So that is the target date for making sure that everyone is actively involved in producing some positive outcome on this conflict,” said the UN Special Envoy for Syria, Staffan de Mistura, told reporters in Geneva.

Having suspended the talks between the government and the opposition in April, the UN envoy had set two target dates in August for the resumption of the talks to end more than five years of conflict in the Middle Eastern country.

Giving an update on the Russia-United States talks on a cessation of hostilities, he said “the discussions are ongoing at the very senior military, security and diplomatic level” between the two nations, adding that their talks may last until “probably Friday or Saturday morning.” The US and Russia are the co-chairs of the international grouping known as the ISSG, which comprises the UN, the Arab League, the European Union and 16 other countries. In Geneva, the taskforces on humanitarian aid delivery and a ceasefire – created by the ISSG – have been meeting separately since early this year on a way forward in the crisis.

Mr. de Mistura had earlier said that the outcome of the ongoing US-Russia talks would affect the course of taskforces’ discussions.

In addition, he said at today’s briefing that it was likely that the international community is “going to be very much focused on what maybe happening” at the Group of 20 meeting in Beijing on Sunday.

As for the proposed 48-hour humanitarian pause to the fighting in the city of Aleppo, Mr. de Mistura and his humanitarian advisor, Jan Egeland, said that an agreement is yet to be reached, as negotiations are still under way, following the announcement of support by Russia.

“Aleppo is one of the areas where we are ready to go immediately when there is a 48-hour pause, but we are still negotiating the access road and the modalities of this, including with the armed opposition groups,” said Mr. Egeland, adding that 4,000 food rations, enough to feed 20,000 people, are left.

He said that the UN was only able to reach three of the 18 besieged areas in August – Deir-ez-Zor by air drops, Al-Waer with two convoys and east Harasta with one convoy. “It is around one third or less of the population in besieged areas,” he added.

The UN was expecting today to get an answer back from the Government on its request for access to reach 1.2 million people in September.

Referring to the recent mass evacuation of the population of the besieged city of Darayya, Mr. Egeland said that the displaced people were arriving at collective centres in the Damascus area, Idlib and Moadameya, citing non-governmental organizations and other sources.

There are now urgent fears for the safety of communities in other besieged locations, such as Al-Waer, Madaya, Foah and Kefraya. “They all fear for their future, and we need to break the sieges,” Mr. Egeland added.