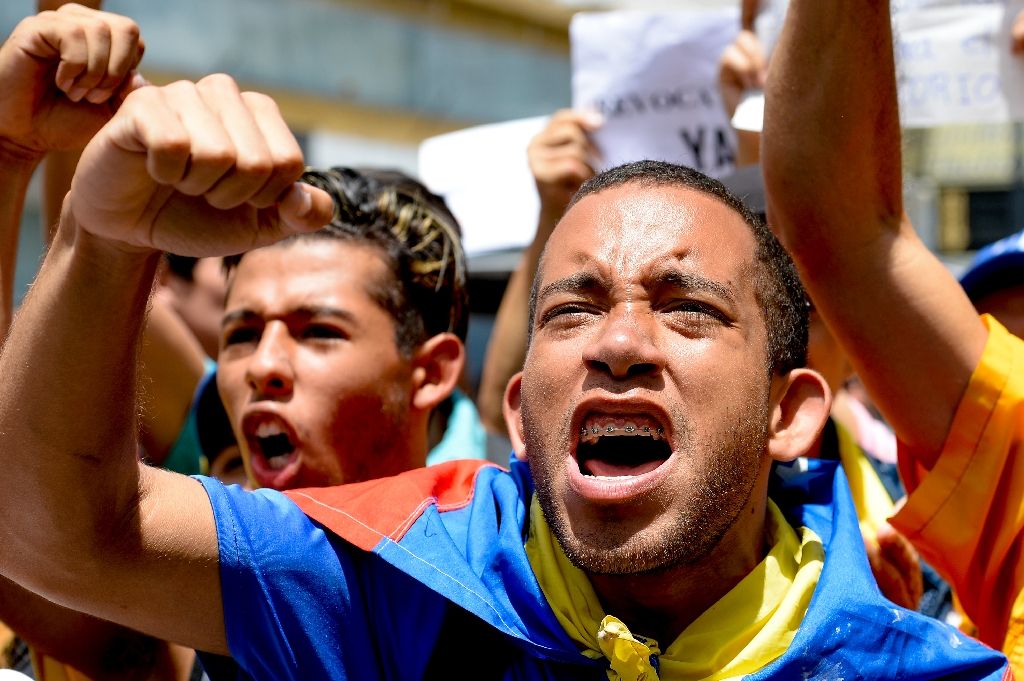 Venezuela’s opposition and government head into a crucial test of strength today with massive marches for and against a referendum to recall President Nicolas Maduro that have raised fears of a violent confrontation.

Soldiers and police began taking up positions at strategic locations across the country Wednesday, ahead of what the opposition is billing as its biggest show of force yet — dubbed “The Taking of Caracas” — against the leftist government.

Opposition leaders are hoping to put hundreds of thousands of people into the streets to demand quick action on a recall vote that Maduro has vehemently resisted.

It comes amid an economic collapse that has led to widespread shortages of food and medicine, violent crime and outbreaks of looting in a once-rich OPEC mainstay.

“All of Venezuela is mobilizing for the right to vote” said Jesus Torrealba, the head of the main opposition coalition, the Democratic Unity Roundtable (MUD).

Calling Thursday’s action “the most important political mobilization of our recent history,” he said marchers would defy the government’s “strategy of fear, blackmail and intimidation.”

Going on the offensive, the “Chavistas” — so named after Maduro’s predecessor, the late Hugo Chavez — staged a big rally Tuesday.

They held another on Wednesday, and have called on their supporters to “defend the revolution” with a massive turnout Thursday at what they call “The Taking of Venezuela.”

“Don’t provoke us because not only are we going to block up Caracas so that no one can enter, but we will also make sure that no one can leave,” said former National Assembly speaker Diosdado Cabello, noting that private flights over Venezuela have been banned this week.

Maduro has accused the opposition of planning a “coup” and threatened to imprison opposition leaders if violence breaks out at Thursday’s protests.

“Squeal, cry or scream, jail is where they’ll go,” he said.

The president said Wednesday he would ask the Supreme Court to consider a request to lift immunity from prosecution granted to public officials, starting with the country’s lawmakers.

The move would allow him to target opposition legislators who control the National Assembly.

“The opposition is playing for it all with everything it has,” he said. “It wants to show that it is a great majority in a country that wants change.”

“The government is centered on a strategy of demoralize, demobilize and sow fear,” he added.

The referendum’s timing lies at the heart of the battle.

If it takes place before January 10 and Maduro loses, new elections must be held. If he loses in a recall after that date, he would simply turn over power to his hand-picked vice president.

The opposition, which accuses the National Electoral Council of slow-rolling the process to benefit the “Chavistas,” is demanding the process be accelerated for a vote this year.

However, the council insists it won’t be swayed by protests, warning that it will halt the process altogether if street protests turn violent.

To recall Maduro, the “yes” vote must exceed the 7.5 million votes with which he was elected in 2013.

The polling firm Venebarometro says 64 percent of the electorate would vote against him.

“What is coming is change because the people want to recall hunger, insecurity and the lack of medicine,” Torrealba said, adding that opposition marchers would focus protests on three strategic avenues in eastern Caracas, an opposition stronghold.

Maduro, who blames the crisis on the collapse of oil prices and an “economic war” by business leaders, must contend with deep public discontent over shortages and an inflation rate projected to hit 720 percent this year.

Despite the angry public mood, the opposition has not organized mass rallies since 2014, when the government crushed weeks-long anti-government protests in a confrontation that left 43 dead and prominent opposition leaders in prison.

Former presidential candidate Henrique Capriles, who distanced himself from the protests in 2014, told AFP that this time the opposition is banking on mass mobilizations and international pressure to get the government to accept the recall election.

Maduro has lashed out at the protest as a plot by the “fascist right” that “comes directly from North American imperialism.”

The socialist leader linked the protests he faces to Brazil’s impeachment trial of president Dilma Rousseff and the assassination of a deputy minister of Bolivia’s president Evo Morales.

Capriles meanwhile urged people not be intimidated, estimating that a million people would heed the call to march.

MUD delegates traveled to the United States to urge the United Nations and the Organization of American States to monitor Thursday’s protests and condemn what they regard as an increase in the level of repression.

The authorities arrested two opposition leaders in the days ahead of the march and sent back to prison a former mayor, Daniel Ceballos, who had been under house arrest for the past year following the 2014 protests.

They also barred three journalists planning to cover the march from entering Venezuela after they landed at the Caracas airport.

“My Venezuela reporting trip off to a bad start: Am getting deported back to Colombia with @detoeuf y @CesarMorenoH,” tweeted John Otis of NPR, who was with Marie-Eve Detoeuf of the French newspaper Le Monde and Cesar Moreno of the Colombian radio station Caracol.