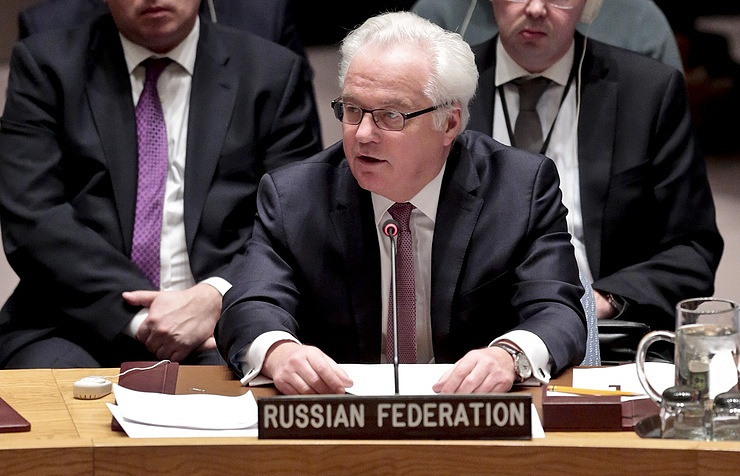 Evidence in the report of the joint OPCW-UN joint mission pointing to the possible implication of Syrian government forces in chemical attacks could have been fabricated by the opposition or terrorist groups, Russian Ambassador to the UN Vitaly Churkin told a closed-door meeting of the UN Security Council on Tuesday. The text of his speech has been circulated by the Russian permanent mission.

“Already at this stage we have a number of questions regarding the findings of the OPCW-UN Joint Investigative Mechanism (JIM) on some cases. Evidence given in the report gives rise to serious doubts. It could have been fabricated by the forces opposed to Damascus and terrorist groups, perhaps not without outside help,” Churkin said. He drew attention to the fact that in one of the cases JIM admitted that evidence provided by eyewitnesses interviewed by the OPCW mission was falsified information.

The Russian diplomat noted that JIM’s estimates are actually based on one factor – the possibility of use of aircraft by this or that side. Experts emphasize that they found no evidence that the armed opposition used helicopters during the incidents. According to Churkin, the report takes into account the fact that there are nine ready-to-fly helicopters at the airbases in Idlib province the government had lost control over. However, to fly them one needed a certain technical level. “It’s unclear why the authors of this report doubt that well-prepared and trained, including abroad, armed groups have this level,” the diplomat said.

Churkin also pointed to the need to ask a question who stands to gain from use of chemical agents in Syria. “Apparently, it is not Damascus. Such actions are of no importance for the government forces militarily. However, they are extremely important for gunmen who believe, not without reason, that any suspicion will be turned against the official Syrian authorities. That is what we have seen over the past three years,” he said.

The report on the investigation conducted by the UN and OPCW experts was submitted to the UN Security Council on August 24. They investigated the cases of the use of chemical agents in Syria from December 2015 to August 2016. The investigators were able to make conclusions on those responsible for the chemical attacks only in three cases.

The OPCW-UN specialists claim that they have sufficient information confirming the complicity of Syrian government forces in the chemical attacks in the province of Idlib. The conclusions are based, among other things, on the evidence of eye-witnesses and a forensic expert study. Thus, according to the specialists, the remainder of a shell found at the place of the attack in Sarmin corresponds to the design of a barrel bomb – a weapon used by the Syrian aviation.

Syria agreed in September 2013 to place its chemical weapons at the disposal of the international community for their subsequent elimination as part of a deal concluded between Moscow and Washington. The deal was preceded by a gas attack in the suburbs of Damascus, which killed from 280 to 1,700 people, according to various data. The agreement on Syria’s chemical disarmament was sealed by UN Security Council Resolution 2118 passed on September 27, 2013. The UN Security Council warned in this resolution that in case of the use of chemical weapons by anyone in Syria, it might take measures under Chapter 7 of the UN Charter, which admits of the possibility of imposing sanctions and using military force.