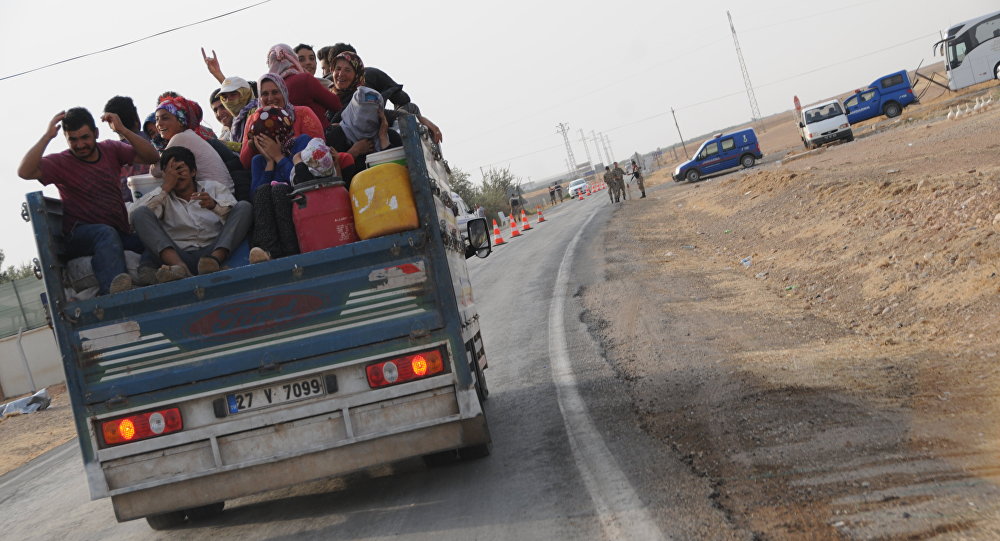 Now that Turkish armed forces and Free Syrian Army fighters have pushed Daesh out of the northern Syrian city of Jarabulus, scores of former residents can’t wait to return to their homes, according to Sputnik Turkey.

Although the city of Jarabulus in northern Syria has already been liberated from Daesh terrorists, Turkey has yet to open the border so that tens of thousands of former residents can return home, a Sputnik Turkey correspondent reports.

Many Jarabulus residents fled to Turkey after Daesh seized the city in 2014. Once news broke about Turkish forces entering the city, hundreds of Jarabulus citizens arrived at the Turkish border town of Karkamis, hoping to return home as soon as possible.

In an interview with Sputnik, 28-year-old local Abid Abdülhekim said that he and his family are looking forward to the moment when it will be possible for them to go back to Jarabulus.

“We all hope that this day will come soon. When Daesh terrorists controlled the city, it became impossible to live in it, which is why we fled to Turkey. When in Jarabulus, we were banned by Daesh from smoking in the streets and moving freely around the city; it was impossible to live a normal life,” he said.

He was echoed by 25-year-old Ibrahim Isa, who told Sputnik that he misses his hometown and that he plans to return there in the near future.

At the same time, he said that he will move his relatives to Jarabulus only after the situation fully normalizes in the city, which is currently controlled by the Free Syrian Army. This is not the case with the city’s outskirts, where armed clashed between Daesh terrorists and Kurdish forces shoe no sign of abating.

According to Isa, tens of thousands of civilians will return to Jarabulus after the hostilities come to a halt.

In a separate interview with Sputnik, Resit Hemo said that he, like many other Jarabulus residents, fled with his family to Karkamis and that he would like to return home very much.

“Our house was captured by Daesh terrorists, who used it as their safe haven. Although we can’t wait to return home, we are very much concerned about our future in Jarabulus, where numerous separate armed groups are still in place. I’m afraid that it may lead to serious clashes between them in the future,” he said.

The stated goal of Turkey’s Operation Euphrates Shield was to cleanse Jarabulus of Daesh and prevent Kurdish forces from advancing further west. The operation, which was backed by some 5,000 Free Syrian Army fighters and the air support of the US-led coalition, started on August 24.

On the next day, it was reported that Turkish forces took control of Jarabulus. According to Turkish media, the military operation in the city will last for two weeks.

Meanwhile, French author and lecturer Gerard Chaliand said in an interview with Le Figaro that the Turkish operation in Jarabulus is aimed at preventing a united Kurdish region in Syria, and the fight against Daesh was merely a pretext.

“Turkey started an operation in Syria to stop Kurds and, to a lesser degree, to fight Daesh. Turkey will never allow a united Kurdish territory to take shape in Syria,” he said.

Earlier this week, the Turkish General Staff released a statement that Free Syrian Army fighters, backed by Ankara, had pushed terrorists from 10 villages to the south of Jarabulus.

The statement did not specify whether the terrorists were members of the Daesh or Kurdish YPG-backed Syria Democratic Forces. Ankara maintains that the YPG (People’s Protection Units) is linked to the Kurdish Workers’ Party, a Kurdish separatist group which has been active for decades in Turkey and which Ankara believes is responsible for a number of terrorist attacks.

According to the statement, a total of 400 square kilometers (some 249 square miles) in northern Syria have been retaken from terrorists since the start of Operation Euphrates Shield. The Syria Democratic Forces-associated Jarabulus Military Council announced on Monday that its forces had been instructed to withdraw beyond Sajur River to protect civilians from Turkish aerial bombardment.

The Council was established less than a month ago with the intention of liberating Jarabulus from Daesh, prompting Turkey to make good on its promise to invade the border town. On August 22, the Council’s commander, Abdel Sattar al-Jader, was assassinated, allegedly by two Turkish snipers who were later captured, according to the UK Telegraph.

The US on Monday urged Turkey and the SDF to stop fighting each other and focus on eradicating Daesh, but Turkish President Erdogan, according to the New York Times, vowed to press ahead with the military operation until both Daesh and the Kurdish Syrian fighters no longer pose a security threat to Ankara.