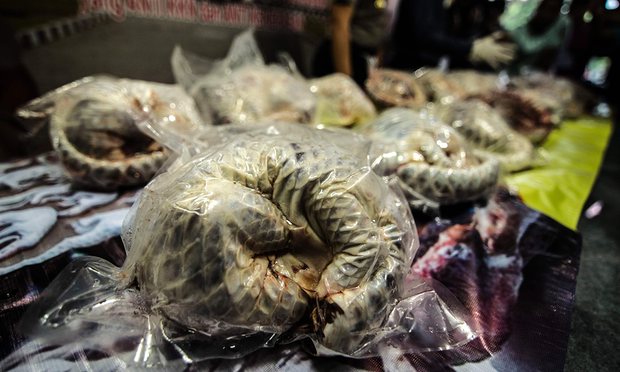 Police discovered the pangolins, known as “scaly anteaters”, when they raided a house in Jombang district on the main island of Java after local residents became suspicious about the large number of freezers in the property.

A total of 657 pangolins, which are consumed as a luxury dish in China and used in traditional medicine, were found wrapped in plastic and stored in five large freezers, East Java province police spokesman Raden Prabowo Argo Yuwono told AFP.

The house owner, a 55-year-old man whose identity was not disclosed, was arrested and has been named a suspect, a step in the Indonesian legal system meaning that authorities believe they have enough evidence to consider filing charges.

He could face five years in prison and a fine of 100m rupiah ($7,500) for breaking wildlife protection laws.

“The suspect insisted the Pangolins were not his, a friend asked him to store the animals because he has freezers,” Yuwono said, adding the friend named by the suspect was also being sought.

The suspect, who was arrested during the police raid on 15 August, insisted he had not sold any of the pangolins and refused to tell police where they were to be sent, the spokesman said.

Pangolins are sought after in China and other parts of Asia for their meat, skin and scales. The meat is considered a delicacy, while the skin and scales are used in traditional medicine and to make fashion items such as make boots and shoes.

Protection group the International Union for Conservation of Nature classifies the pangolin species found in Indonesia as critically endangered.