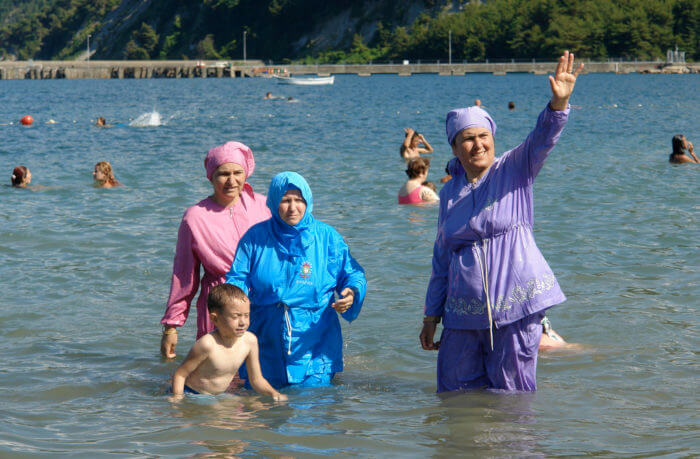 France’s highest administrative court will Thursday examine a request to overturn a ban on the burkini after photographs of police surrounding a woman on a beach fuelled the controversy over the Islamic swimsuit.

France’s Human Rights League is appealing a decision by the southern town of Villeneuve-Loubet, near Nice, which was one of the first of around 30 French towns to ban the burkini.

A court in the Riviera city of Nice upheld the ban this week.

The State Council has 48 hours to issue its ruling, which is expected to set a precedent for other towns.

The burkini bans have triggered a fierce debate in France and elsewhere about the wearing of the full-body swimsuit, women’s rights and secularism.

Anger over the issue was further inflamed when photographs were published in the British media of police surrounding a veiled woman on a Nice beach removing her tunic.

Nice mayor’s office, however, denied she had been forced to remove clothing, telling AFP the woman was showing police the swimsuit she was wearing under her tunic, over a pair of leggings, when the picture was taken.

The police issued her with a fine and she then left the beach, the officials added.

Prime Minister Manuel Valls said he condemned any “stigmatisation” of Muslims, but maintained that the burkini was “a political sign of religious proselytising”.

“We are not at war with Islam… the French republic is welcoming (to Muslims), we are protecting them against discrimination,” he told BFMTV.

But in a sign of the divisions within the Socialist government on the issue, Education Minister Najat Vallaud-Belkacem said the “proliferation” of burkini bans “was not a welcome development”.

‘No link to terrorism’

Vallaud-Belkacem, who is of Moroccan origin, took issue with the wording of the ban in Nice which linked the measure to the jihadist attack in the resort last month in which 86 people were killed.

“In my opinion, there is nothing to prove that there is a link between the terrorism of Daesh and what a woman wears on a beach,” she said, using another term for Islamic State.

But Valls stood firm, saying the bans were necessary to maintain “public order”.

The administrative court in Nice ruled on Monday that the ban in Villeneuve-Loubet was “necessary, appropriate and proportionate” to prevent public disorder after the truck attack in Nice and the murder of a Catholic priest by two jihadists in northern France.

The burkini was “liable to offend the religious convictions or (religious) non-convictions of other users of the beach,” and could be seen as “a provocation”, it added.

The so-called burkini bans never actually mention the word burkini, although they are aimed at the garment which covers the hair but leaves the face visible and stretches down to the ankles.

The vague wording of the prohibitions has caused confusion.

Apart from the incident featured in the photographs in Nice, a mother of two told AFP on Tuesday she had been fined on the beach in the resort of Cannes wearing leggings, a tunic and a headscarf.

“I was sitting on a beach with my family. I was wearing a classic headscarf. I had no intention of swimming,” said the 34-year-old who gave only her first name, Siam.

Anouar Kbibech, the head of the French Council of the Muslim Faith (CFCM), said he was “concerned over the direction the public debate is taking.”

London Mayor Sadiq Khan, the first Muslim mayor of a major Western capital, condemned the bans as he headed to Paris Thursday for talks with his French counterpart.

“I don’t think anyone should tell women what they can and can’t wear. Full stop. It’s as simple as that,” he told the London Evening Standard newspaper.

One of the world’s most secular countries, France strongly separates religion and public life.