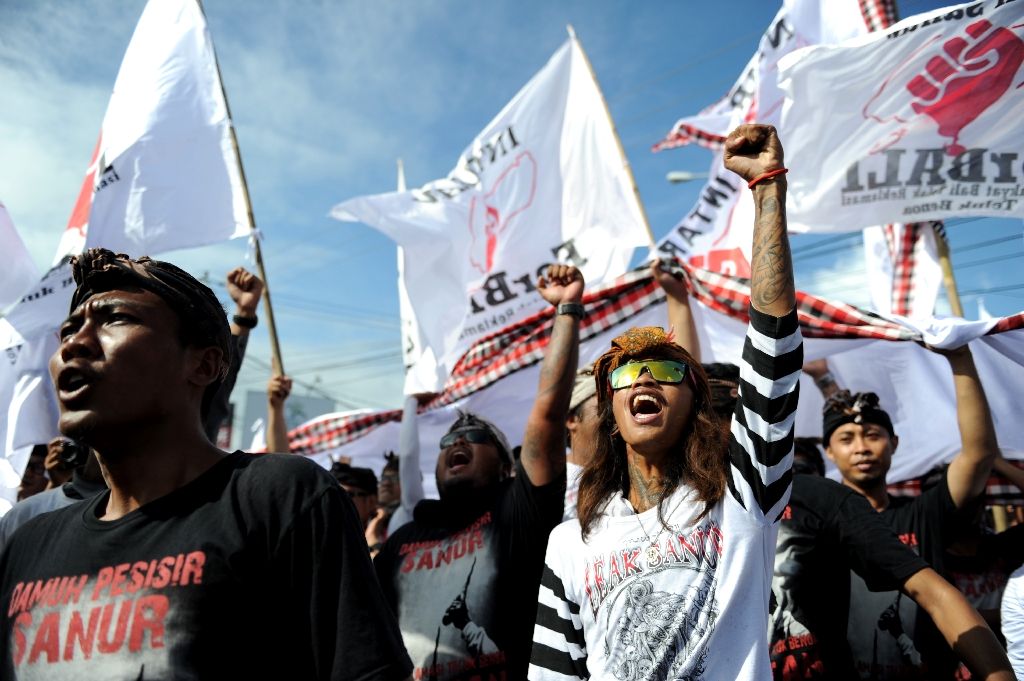 Not far from tourists sipping cocktails on Bali’s tropical, palm-fringed beaches, thousands of protesters in sarongs and headdresses waved banners and chanted during a noisy protest.

It was an unusual sight on the “Island of the Gods”, which is better known for hordes of foreign visitors, its ancient Hindu culture and picture-postcard temples.

But a proposed $15-billion project that involves constructing artificial islets to host luxury resorts in Benoa Bay has sparked the biggest protest movement seen on the resort island for years.

Critics say the last thing the overcrowded tourist hub needs is the major land reclamation, which they claim will damage the environment, destroy fishermen’s livelihoods and desecrate holy sites in the pocket of Hinduism in Muslim-majority Indonesia.

Environmentalists fear new resorts will create a lot of waste, that may end up being dumped in to the bay. There are also concerns the islets would disrupt the flow of water from several rivers out to sea — leading to dirty water being pushed back to Bali, and may cause flooding.

“There will be floods in the future, the water will be dirty and smelly,” said protest leader Wayan Gendo Suardana at the demonstration, which brought together thousands of villagers and environmentalists, with music provided by local pop stars.

He also warned: “Benoa Bay is a holy site for Balinese Hindus which needs to be protected.”

Tourism on Bali, which is home to most of Indonesia’s Hindu minority, began to take off in the 1970s and has been accompanied by a boom in resort construction.

The industry has developed steadily in the decades since — although tourist numbers dipped for a time following deadly bomb attacks in 2002 and 2005 — and Bali last year welcomed four million foreign visitors.

There have long been concerns that rapid development is threatening the island’s beauty, as some popular beaches become increasingly dirty, but the Benoa Bay project has sparked an unusually large protest movement, with demonstrations almost every week for the past year.

The 700-hectare (1,700-acre) reclamation — about half the size of the bay — involves piling up sand and dirt to build about 12 islets. As well as resorts, they will host shops and a theme park.

It will make for a potentially lucrative development just a short drive from Bali’s international airport, with easy access provided by a toll road opened in 2013.

“The connection between the people and nature is very strong and it needs to be maintained,” said spokesman I Made Iwan Dewantama.

The developer has staunchly defended the project, saying that it will create around 200,000 jobs and boost the island’s economy.

But activists have rejected claims about the economic benefits with the Bali Forum Against Reclamation (ForBali) — the group at the forefront of the protest movement — saying that unemployment levels on the island of about four million inhabitants are low.

Lead by Suardana, they also say Bali is not in need of another resort, as development has been rapid in recent years and many hotel rooms are not regularly filled.

Crucially, the project has the backing of Bali governor I Made Mangku Pastika who says the bay is currently a muddy, rubbish-strewn area in need of revitalisation and insists the project won’t cause floods.

“If the sea level does rise, it won’t rise drastically,” he told AFP.

“In other parts of the world, other countries carry out reclamation projects. Singapore is constantly reclaiming land, the Netherlands even reclaimed a whole province. Are they sinking? No.”

He also said that the new islets would have mangroves planted around them, which would serve as protective barriers in the event of a tsunami, a constant threat in a country frequently hit by powerful earthquakes.

The project is hardly a foregone conclusion however — the government still needs to consider an environmental impact assessment, and have not indicated how long this will take.

ForBali is optimistic their protest movement may halt the plan as they believe President Joko Widodo, a former furniture seller who rose from humble origins, will heed the complaints of ordinary people.

Suardana already believes the demonstrations have held up the development.

“If we hadn’t been protesting, the reclamation project would have started ages ago,” he said. “Our voices count.”