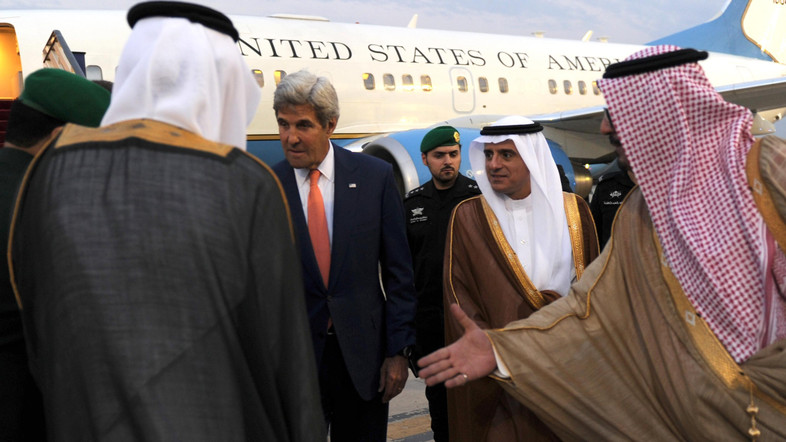 Kerry arrived in Jeddah from Nigeria for discussions with Saudi leaders and other Gulf Arab states and will also update them on US meetings with Russia addressing military cooperation in Syria, a senior US official said ahead of the talks.

The talks come as Syrian rebels backed by Turkish special forces, tanks and warplanes entered one of ISIS’s last strongholds on the Turkish-Syrian border, in Turkey’s first major US-backed incursion into its southern neighbor. In Saudi Arabia, talks with the deputy crown princ, which began late and lasted three hours, ended at 12:59 a.m. local time, US officials said.

A senior State Department official declined to elaborate on Kerry’s proposals. “The multilateral meeting on Yemen is designed to share ideas and initiatives for getting the political discussions back on track and trying to get a political solution,” the official said. It would also address getting aid delivered.

The US military has coordinated with the Saudi-led air campaign in Yemen, helping ensure Saudi access to precision-guided munitions. Kerry “will raise our concerns about civilian casualties and damage to civilian targets inside Yemen,” the US official said.

Washington Post reported that U.S. Secretary of State John Kerry arrived in Saudi Arabia on Wednesday for meetings with the kingdom’s senior royals and other Gulf officials for talks focusing on Yemen’s stalled peace process.

The newspaper quoted a senior State Department official traveling with Kerry saying that “Kerry is expected to raise U.S. concerns about civilian casualties in Yemen “and our strong desire to ensure that those sorts of casualties are avoided, and that the conduct of the air campaign is done with all proper and appropriate regard for being discriminate and precise.”

The official was not authorized to speak publicly about the meetings and so spoke on condition of anonymity.

The United States has backed a Saudi-led coalition of nine Arab countries in a nearly 18-month bombing campaign against Shiite Houthi rebels and their allies in Yemen. The Houthis, who are allied with Saudi Arabia’s regional rival, Iran, seized the capital, Sanaa, in 2014. The U.S. has provided logistical and intelligence support to the coalition.

The conflict has killed more than 9,000 people, including more than 3,700 civilians and displaced 2.4 million. The fighting has destroyed much of the already limited infrastructure in one of the Arab world’s poorest countries.

U.N.-backed peace talks held in Kuwait were suspended earlier this month, leading to an uptick in airstrikes and fighting.

Doctors Without Borders announced last week it was withdrawing from northern Yemen due to what the international aid group called “indiscriminate bombings and unreliable reassurances” from the Saudi-led coalition after an attack on a hospital it supported in the area killed 19 people and wounded 24.

Rights groups, meanwhile, are calling on the U.S., Britain, France and others to suspend weapon sales to Saudi Arabia until it curtails its airstrikes in Yemen.

One of Kerry’s first meetings in the Red Sea city of Jiddah on Wednesday evening was with Deputy Crown Prince Mohammed bin Salman, who is also Saudi Arabia’s defense minister.

Today, Kerry is scheduled to meet the U.N. envoy to Yemen, Ismail Ould Cheikh Ahmed, before taking part in joint talks with Saudi and Emirati officials, as well as a senior British diplomat.