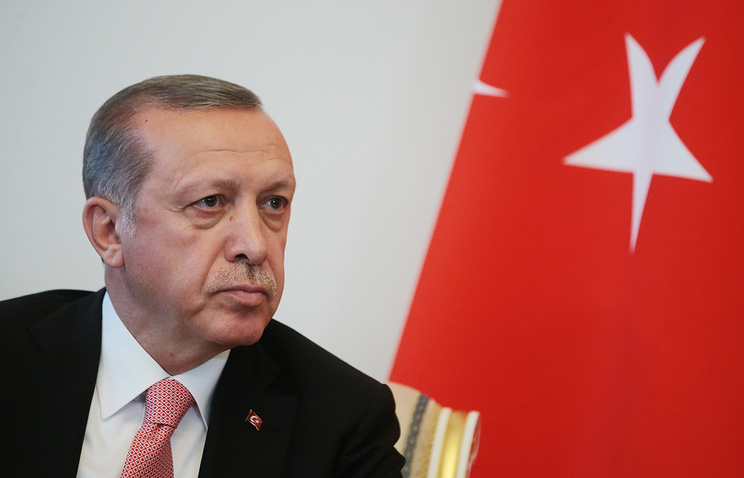 Units of the Syrian Free Army has established full control over Jarablus and terrorists have been compelled to flee it, Turkish President Recep Tayyip Erdogan said on Wednesday after talks with visiting US Vice-President Joseph Biden, Russian news agency TASS reported.

“Jarablus is located 20 km to 30 km away from our border and we said more than once we were concerned about the missiles launched from there that hit our territory,” Erdogan said. “As a result, we took a decision after consultations with the international coalition (to conduct an operation on the Syrian territory – TASS,” Erdogan said.

“The Turkish Army and the Syrian Free Army entered Jarablus with support from the air by forces of the coalition,” he said.

“The Syrian Free Army and residents of Jarablus have re-established full control over the town,” Erdogan said. “They have recaptured all the governmental and official buildings.”

He said the Islamic State militants were compelled to flee the city.

As he mentioned the broader prospects for settling the conflict in Syriua, Erdogan surmised that Syria would not be successful in changing over to democracy under President Bashar Assad’s leadership.

Earlier, Turkish news outlet Hurriyet Daily news mentioned that “Turkish-backed Syrian rebels have taken the Syrian town of Jarablus back from Islamic State of Iraq and the Levant (ISIL) jihadist group, after an operation involving Turkish tanks and special forces backed by U.S. and Turkish jets”.

The agency announced: Speaking after meeting U.S. Vice President Joe Biden, Erdoğan said that a terrorist organization fighting another terrorist organization did not make it innocent, and that both ISIL and the Syrian Kurdish YPG, which enjoys U.S. backing in Syria, were terrorist groups.
The Pentagon also announced that the U.S. carried out eight airstrikes in the Jarablus operation targeting ISIL militants. Biden also added that Washington strongly believed that Turkish border must be controlled by Turkey and there should not be any occupation by any other group.

In addition, commenting on the U.S. based Islamic preacher Fethullah Gülen’s extradition, the Vice President said the case would be presented to the Federal Court and it will decide as soon as there is enough evidence.

He also noted that the U.S. had not motive for Turkey to be a military state. Biden also apologized for not coming to Turkey earlier after the failed coup attempt of July 15, which was blamed on the Fethullahist Terror Organization (FETÖ).

Erdoğan added that Ankara’s demand on Gülen’s extradition should not be disregarded and bilateral agreements between Ankara and Washington require his detention.

Meanwhile, the White House has announced that the U.S. Justice officials were carefully reviewing the evidence related to Gülen’s extradition, saying Ankara had provided a lot of information on the issue.

The operation — named “Euphrates Shield” — began at around 4:00 am (0100 GMT) with Turkish artillery pounding dozens of IS targets around Jarabulus. Turkish F-16 fighter jets also hit targets inside Syria.

A dozen Turkish tanks then rolled into Syria along with hundreds of Syrian opposition fighters in pick-ups who then moved south towards Jarabulus. US A-10s and F-16s warplanes also hit IS targets in Syria in support of the offensive, a US official said.

The speed of the advance was stunning and stood in stark contrast to the long, grinding battles required for Kurdish forces to recapture towns from IS in northern Syria, such as Kobane and Manbij.

Turkey’s NTV television said that IS militants had shown little resistance to the advancing forces. The Dogan news agency said 46 jihadists were killed but this was not confirmed by officials.

Syrian fighter reconnaissance teams have begun working in the centre of Jarabulus to check for any explosives left behind by the jihadists.

A Turkish official, who declined to be named, said: “Turkey will continue operations until we are convinced that imminent threats against the country’s national security have been neutralised.”

Turkey wants to show it is serious about taking on IS, which has been blamed for a string of attacks inside the country — the latest a weekend attack on a Kurdish wedding in Gaziantep that left 54 people dead, many of them children.

Turkey has long been alarmed about the activities inside Syria of the People’s Protection Units (YPG) militia, which Washington sees as an ally but Ankara regards as a terror group.

Biden on Wednesday said Washington had made clear to pro-Kurdish forces in Syria that they must not cross west of the Euphrates River.

“They cannot, will not and under no circumstances (will) get American support if they do not keep that commitment. Period,” he said.

Saleh Moslem, head of the Democratic Union Party (PYD), the YPG’s political wing, tweeted that Turkey was now in the “Syrian quagmire” and would be “defeated” like IS.

Erdogan said the operation was aimed against both IS and PYD — “terror groups that continuously threaten our country in northern Syria”. “We have said ‘enough is enough’… This now needs to be resolved,” he said.

The Turkish air strikes were the first since a November diplomatic crisis with Russia sparked when the Turkish air force downed one of Moscow’s warplanes.

The developments have come at a critical juncture for Turkey in Syria’s five-and-a-half-year war, with signs growing it is on the verge of a landmark policy shift.

Ankara has always called for the removal of President Bashar al-Assad, putting Turkey at odds with his main supporters Iran and Russia.

However Prime Minister Binali Yildirim acknowledged at the weekend for the first time that Assad was one of the “actors” in Syria and may need to stay on as part of a transition.

But in a note of discord, Russia said it was “deeply concerned” at the situation on the border warning of a “further degeneration of the situation”.