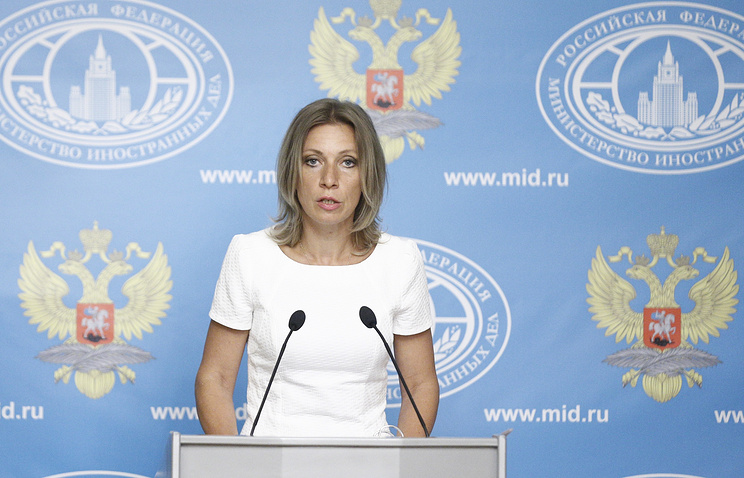 Zakharova: Russia, US engaged in serious work on Syria

Russia and the US are engaged in serious work on Syria, it continues nonstop, Russian Foreign Ministry spokeswoman Maria Zakharova told Vesti FM radio on Tuesday.

“We are making frank statements on what does not suit us. At the same time, constructive work continues – at the level of ministers, experts and via military channels,” Zakharova said.

Moscow deems this work “extremely important and topical, it does not give up on it,” the diplomat stressed.

“At the moment we see objective showings on this,” she said. “Washington’s not doing what it committed itself to doing, could do and must do is the main constraining factor,” she added.

US inability to dissociate Syrian opposition from terrorists hinders cooperation

According to the spokeswoman, the key deterrent of Russian-US antiterrorism cooperation is Washington’s inability to fulfill the pledge to dissociate moderate opposition from terrorists in Syria.

“Up until now, despite the taken commitments, American counterparts are unable to separate terrorists from moderate opposition,” the diplomat said.

“We are being guided by assertions given to Russia by high-ranking American representatives that in order to separate terrorists and moderate opposition, Washington will need two weeks. It was in February-March. Now it’s late August,” she noted.

The spokeswoman has also pointed out that Western countries are guilty of the Syrian people’s suffering because they support the opposition, which is hiding behind “the backs of terrorists.”

“For the moment, they (Western countries – TASS) are telling the United Nations Security Council about the suffering of Syrian children. Over the past five years, they have been arming the opposition and hiding terrorists behind its back. They helped them technically, materially and financially – and now they are talking about the suffering of Syrian children,” Zakharova explained.

According to the United Nations, more than 220,000 people have died since the start of the Syrian conflict. About 4 million Syrians have become refugees and another 7.6 million have been displaced. Twelve million Syrians are in urgent need of relief aid.

Anti-government protests in Syria started on March 15, 2011. They later swept all major Syrian cities. The demonstrators demanded democratic reforms and resignation of President Bashar al-Assad. The Syrian government carried out a number of reforms but that did not stop the protests. Besides, the number of armed groups fighting against the government forces kept growing. Some of them were extremist and attracted foreign mercenaries into their ranks.